The debate over the extent to which uninsured medical costs lead to personal bankruptcies is interesting for a couple of reasons. In terms of social science, it shows the difference between a naive reading of survey data and an actual research design. In terms of politics, it shows the allure of a more glamorous and striking claim, even when incorrect, over a similar claim that is less flashy but actually true.


There's a recent outbreak of this debate in the pages of the New England Journal of Medicine. In the issue of March 22, 2018, Carlos Dobkin, Amy Finkelstein, Raymond Kluender and Matthew J. Notowidigdo have written a short "Perspective" piece called "Myth and Measurement — The Case of Medical Bankruptcies" (pp. 1076-1078). It's a purely verbal article, not a research report, which draws heavily the findings of their article called "The Economic Consequences of Hospital Admissions." which appeared in the February 2018 issue of the American Economic Review (108: 2,  pp. 308-52). If you don't have access to the AER online, a final version of the paper in manuscript is here.

The Dobkin et al. article is criticizing earlier studies that claimed to show that medical costs were the cause of 60% of all personal bankruptcies in the US. Several of the authors of that work-- David U. Himmelstein, Steffie Woolhandler,  and Elizabeth Warren (now a US Senator from Massachusetts)--responded in the June 7 issue of the NEJM (pp. 2245-2246), offer a response, which is then followed by a brief response from the Dobkin et al. group (pp. 22245-2246).

"During the push to pass the Affordable Care Act, President Barack Obama often described the “crushing cost of health care” that was causing millions of Americans to “live every day just one accident or illness away from bankruptcy” and repeatedly stated that the high cost of health care “causes a bankruptcy in America every 30 seconds.” Stories of illnesses and injuries with financial consequences so severe that they caused households to file for bankruptcy were used as a major argument in support of the 2010 Affordable Care Act. And in 2014, Senators Elizabeth  Warren (D-MA) and Sheldon Whitehouse (D-RI) cited medical bills as “the leading cause of personal bankruptcy” when introducing the Medical Bankruptcy Fairness Act, which would have made the bankruptcy process more forgiving for “medically distressed debtors.” But it turns out that the existing evidence for “medical bankruptcies” suffers from a basic statistical fallacy; when we eliminated this problem, we found compelling evidence of the existence of medical bankruptcies but discovered that medical expenses cause many fewer bankruptcies than has been claimed."

Here's the problem: The earlier studies looked at survey data on people who had already declared bankruptcy. If those people in the survey reported either that they had experienced "health-related financial stress such as substantial medical bills or income loss due to illness" or that they "went bankrupt because of medical bills," then the study assumed that medical costs "caused" the bankruptcy. In their later response, Dobkin et al. write:


"Himmelstein et al. argue that if bankruptcy filers are asked what caused their bankruptcy, a large share will say medical expenses. But their approach is not a credible way to estimate the causes of bankruptcy. It is akin to asking patients with cardiac disease what caused their heart attack; they probably do not know whether it was poor genes, poor diet, stress, or other factors. A related problem is social desirability bias, which makes it hard to take at face value explanations reported by the bankruptcy filers. Causal estimates require isolating a potential cause and its effect on the outcome of interest."

That last sentence might be engraved over the doorways of econometrics computer labs everywhere. The results of one of the many statistical tests that Dobkin et al. carry out in their AER article is reported in their NEJM comment. They look at data on half a million people who are admitted to hospitals in California over a four-year period. They find that those admitted to the hospital do have a higher chance of bankrupcy, as shown in this figure. But when they scale up this estimate to the US population, they find that health care costs are responsible for about 4% of bankruptcies, not 60%. 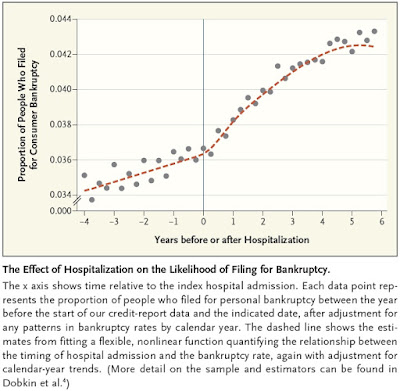 Of course, this estimate is just one piece of evidence. The Dobkin et al. group are scrupulous in pointing out that one also should look at data on people outside of California, at costs of health care not linked to hospitalization, and so on and so on. But they also point out that such factors are pretty unlikely to raise the share of bankruptcies caused by health care costs from 4% to 60%.

"Our findings suggest that non-elderly insured adults still face considerable exposure to adverse economic consequences of hospital admissions through their impact on labor earnings. ... Taken together, our findings underscore the nature of insurance, and the lack thereof, in the United States. Our estimates suggest that in the first few years, the total medical expense and earnings consequences of a hospital admission are similar for insured adults and that over a longer horizon the earnings consequences loom relatively larger. By design, insurance in the US covers (a large portion of) medical expenses but relatively little of the earnings decline. Employer provision of sick pay and private disability insurance is fairly sparse, and public disability insurance is available only after a lengthy application and approval process (Autor et al. 2015). By contrast, in many other countries, there is substantially more formal insurance for the labor market consequences of adverse health."

Of course, it's not the debtors or their self-reports that are being called a "myth." The myth is in the causal interpretation that was being being placed on that data. This style of argument is essentially: "If you don't agree with my interpretation of data, then you are being demeaning toward people in need." When someone resorts to that form of illogic, it's a fair inference that they are losing the argument.

Posted by Timothy Taylor at 9:11 AM