Part of the mythology of US higher education is that it offers a meritocracy, along with a lot of second chances, so that smart and hard-working students of all background have a genuine chance to succeed--no matter their family income. But the data certainly seems to suggest that family income has a lot to do with whether a student will attend college in the first place, and even more to do with whether a student will obtain a four-year college degree.

As a starting point, consider what share of high school graduates, age 18-24, are enrolled in college of any type (two-year or four year, public, private, or for-profit). The gap between the top quarter of the income distribution and the bottom quarter has narrowed a bit in the last 45 years (from 33 percentage points to 27 percentage points), but it remains substantial. Of course, if one took into account the fact that students whose families are in the bottom quarter of the income distribution are less likely to become high school graduates, the gap would be wider still. 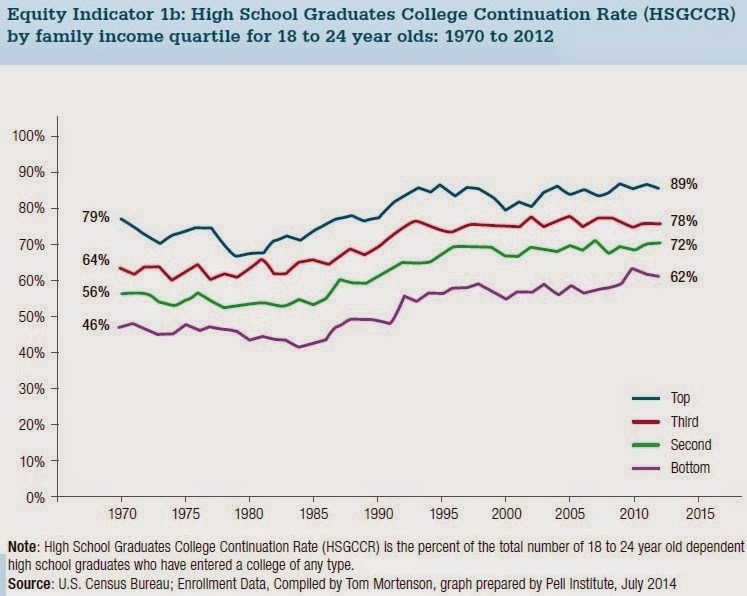 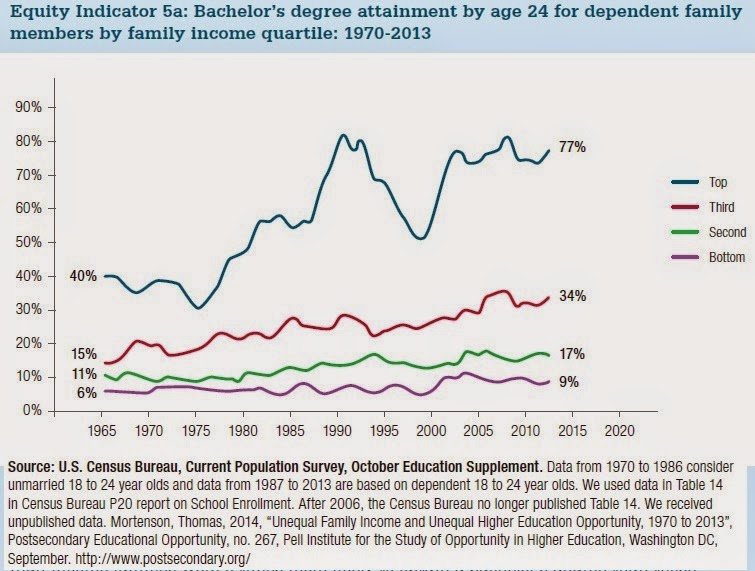 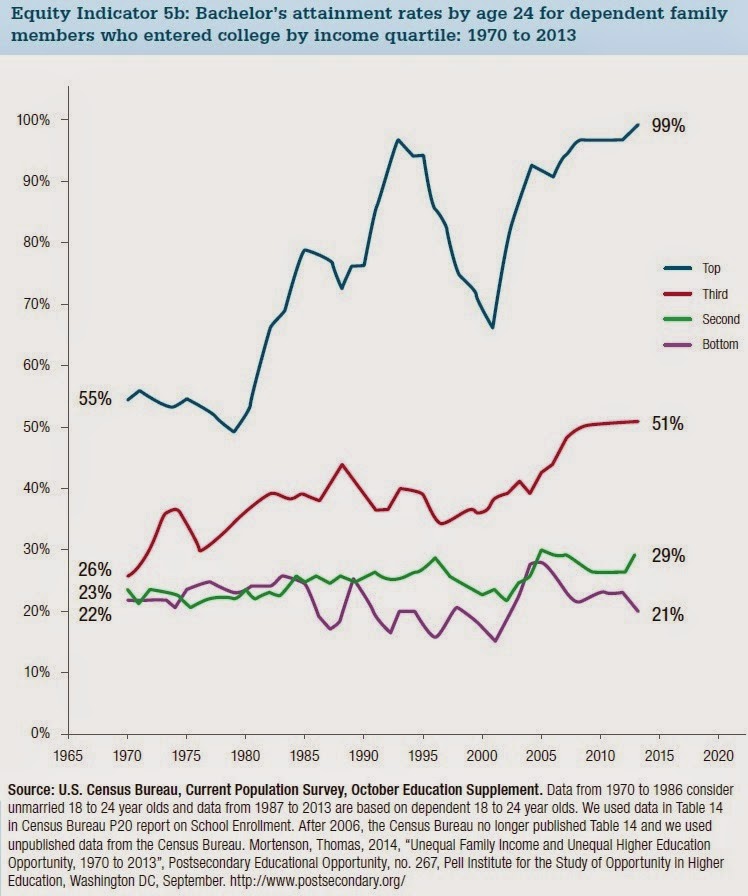 The report offers a range of evidence that the affordability of college is a bigger problem for students from low-income families even after taking financial aid into account. Students from low-income families take out more debt, and are more likely to attend for-profit colleges. Indeed, a general pattern for higher education a whole is that even as the cost of attending has risen, the share of the cost paid by households, rather  than by the state or federal government, has been rising. 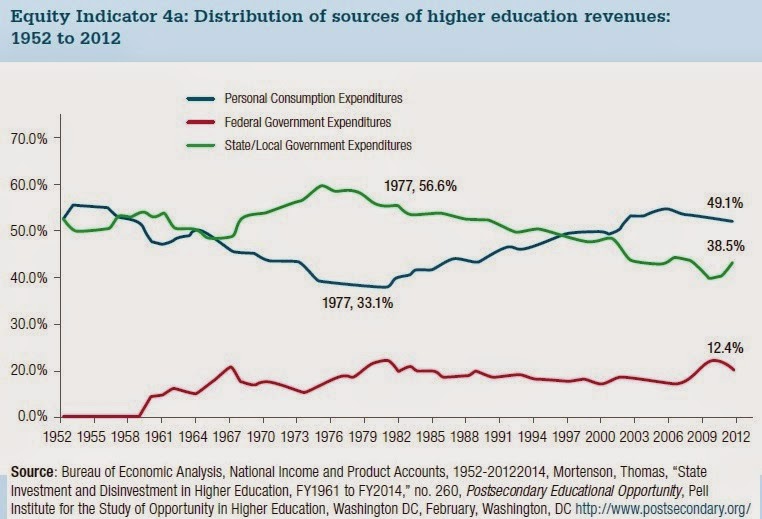 The effects of these patterns on inequality of incomes in the United States are clearcut: higher income families are better able to provide financial and other kinds of support for their children, both as they grow up, and when it comes time to attend college, and when it comes time to find a job after college. In this way, higher education has become a central part part of the process by which high-income families can seek to assure that their children are more likely to have high incomes, too.

This connection is perhaps underappreciated. After all, it's a lot easier for professors and college students to protest high levels of compensation for the top professionals in finance, law, and the corporate world who are in the top 1% of the income distribution, rather than to face the idea that their own institutions of higher education are implicated in perpetuating inequality of incomes across generations. Here's some discussion bearing on the point from "Human Capital in the 21st Century," by Alan B. Krueger, appearing in the First Quarter 2015 issue of the Milken Institute Review. Krueger writes:

Moreover, changes in earnings associated with different levels of education – that is, human capital – have played an outsized role in raising inequality among the bottom 99 percent of Americans.

Consider the following hypothetical calculation. If the top 1 percent’s share of income had remained constant at its 1979 level, and all of the increase in share that actually went to the top 1 percent were redistributed to the bottom 99 percent – a feat that might or might not have been achievable without shrinking the total size of the pie – then each family in the bottom 99 percent would have gained about $7,000 in annual income (in today’s dollars). That is not an insignificant sum. But contrast it with the magnitude of the income premium associated with educational achievement: The earnings gap between the median household headed by a college graduate and the median household
headed by a high school graduate rose by $20,400 between 1979 and 2013 according to my calculations based on the Bureau of Labor Statistics’ Current Population Survey. This shift – which took place entirely within the bottom 99 percent – is three times as great as the shift that has taken place from the bottom 99 percent to the top 1 percent in the same time frame. What’s worse, there are reasons to believe that the enormous rise in inequality that we have experienced will reduce intergenerational economic mobility and cause inequality to rise further in the future. ...

If the return to education increases over time, and higher-income parents are more prone to invest in the education of their children than lower-income parents – or if talents are inherited from one generation to the next – then the gap between children of higher- and lower-income families would be expected to grow with time. Furthermore, if social networking and family connections also have an important impact on outcomes in the job market, and those connections are transmitted across generations, one would expect the ... effect to be even stronger. There are, indeed, signs that the rise in income inequality in the United States since the late 1970s has been undermining equality of opportunity. For example, the gap in participation in extracurricular activities between children of advantaged and disadvantaged parents has grown since the 1980s, as has the gap in parental spending on educational enrichment activities. Furthermore, the gap in educational attainment between children born to high- and low-income parents has widened. The rising gap in opportunities between children of low- and high-income families does not bode well for the future.