Invest in Vice or Virtue?

My stock market investments are in no-load broad-based index fund, just like Warren Buffett recommends. But it seems as if more and more people are looking for a "socially responsible" fund which either rules out certain investments or tries to put pressure on companies to sell off or alter certain lines of business, often those related to tobacco, alcohol, gambling, "adult entertainment." In a chapter in the Credit Suisse Global Investment Returns Yearbook 2015 (published February 2015), Elroy Dimson, Paul Marsh and Mike Staunton write on the question: "Responsible investing: Does it pay to be bad?" They point out that at least at a rhetorical level, claims of responsible investing have become widespread (citations omitted).


The world’s largest asset owners now devote extensive resources to social and environmental issues and corporate governance, and to engaging with investee companies on these issues. The extent of engagement is reported to be at an all-time high. The UN-supported Principles for Responsible Investment lists 1,349 signatories with assets of over USD 45 trillion, around half the assets of the global institutional investor market. The Global Sustainable Investment Alliance estimates that worldwide some USD 14 trillion of professionally managed portfolios incorporate environmental, social and governance concerns into their decisions. ... Under the UN Global Compact, more than 12,000 business organizations in 145 countries have committed to responsible and sustainable corporate practices.

Typically, the motivations for socially responsible investing are that when you gain from investing in a firm, you are to some some degree complicit in what that firm sells or how the firm behaves. Also, stock ownership offers a platform for calling attention and perhaps even exercising influence over the firm, either through a shareholder resolution, threat of divestment, or actual divestment. However, Dimson, Marsh and Staunton also point out an angle I had not considered, which is why the investors with a fairly universal portfolio, like pension funds, endowments, and my no-load equity mutual funds, might not be averse to pressuring firms about social issues:

[T]he very largest asset owners are increasingly “universal owners” ...  They are now so large that they essentially own every company in the market. Furthermore, many of them have investment horizons that extend into the distant future. Universal owners cannot escape costly, company-specific factors: if one investee company benefits at the expense of creating additional costs for another, there may be no net gain to an asset owner with shares in both. Logically, universal owners should focus on increasing the size of the cake – the aggregate value of all corporations – rather than being too concerned about how the cake is sliced up between companies. An example of this broader focus is labor practices. Some investee companies may lower production costs by employing children, or by sourcing from companies that employ children, but they are unlikely to pay the costs of poor child health or under-education. The universal owner may recognize that child labor in one firm reduces the profitability of other firms who do not employ children, and that impaired education may impede broader economic progress. From a long-term perspective, the owner can therefore benefit financially by engaging with companies and regulatory authorities.


Of course, pursuing socially responsible investment--however defined--raises a possibility of missing out on high returns. As the authors point out, vice can be profitable: "The rationale for "vice investing" is that these companies have a steady demand for their goods and services regardless of economic conditions, they operate globally ("vice" is a worldwide phenomenon), they tend to be high-margin businesses, and they are in industries with high entry barriers."

Dimson, Marsh and Staunton offer some evidence that returns to vice may well be higher than market averages. As one example, here's a comparison of two mutual funds. "The Vice Fund invests in businesses that are considered by many to be socially irresponsible. Recently renamed the Barrier Fund, it has assets of USD 290 million invested in “industries with significant barriers to entry, including tobacco, alcoholic beverage, gaming and defense/ aerospace industries.” The Social Index
Fund tracks an index screened by social, human rights, and environmental criteria. Constituents have superior environmental policies, strong hiring/promotion records for minorities and women,
and a safe workplace. There are no companies involved in tobacco, alcohol, adult entertainment,
firearms, gambling, nuclear power, and unfair labor practices. It has assets under management
of USD 1.5 billion ..." 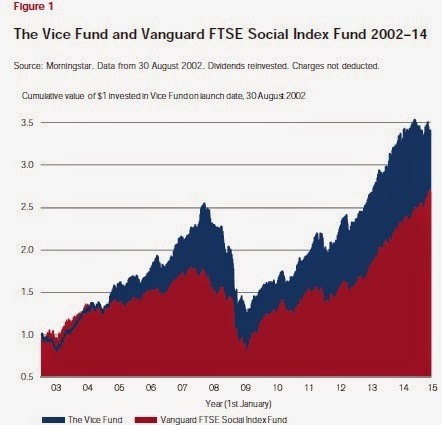 Or as another example, here's a different study comparing "sin stocks" to market returns for a variety of countries from 1970 to 2007. In most countries, sin stocks comfortably beat the market. The "sin" industries in this study included  alcohol, tobacco, "adult services," weapons, and gambling. 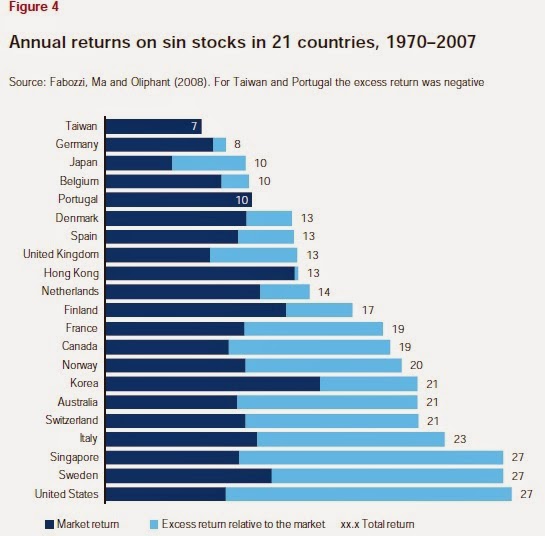 As a final example, the enormous pension fund run by the California Public Employees' Retirement System announced with some fanfare in 2002 that it would not invest in countries that fell short in various categories, which among others ruled out China and Russia, which cost the fund enough that the policy soon changed.

An application of country exclusion was adopted in 2002 by CalPERS, whose Permissible Emerging Market Policy blacklisted entire countries that fell short of a minimal threshold on factors such as political stability, democratic institutions, transparency, labor practices, corporate responsibility and disclosure. The resulting restriction on investing in Russia, China and other (then) high-performing emerging markets was costly: “by late 2006, CalPERS’ emerging market portfolio had been subject to 2.6% in annual opportunity cost of foregone return, totaling over USD 400 million in losses from the time of the policy’s inception” (Huppé and Hebb, 2011). In 2007, CalPERS dropped its emerging-market country withdrawal strategy, and switched to a principles-based approach to selecting companies in the developing world. They chose to use voice rather than exit within emerging markets, and embraced dialogue, engagement and shareholder activism.

Of course, this change by CalPERS raises the possibility that talking about principles is a cheap way of satisfying those who care without giving up on the higher returns, and perhaps without accomplishing much change either. Dimson, Marsh and Staunton argue that the higher returns received by vice may be in part due to those who prefer not to invest in these firms.


The paradox, then, is that depressed share prices for what some regard as noxious and nasty businesses may demonstrate that responsible and ethical investors are having an impact on the value of a company whose activities conflict with social norms. If so, the shares will ultimately sell at a lower price relative to fundamentals. For example, they may trade at a lower price/earnings or lower price/dividend ratio. Buying them would then offer a superior expected financial return which, for some investors, compensates for the emotional “cost” of exposure to offensive companies. ... [I]f companies have a lower stock price, they offer a buying opportunity to investors who are relatively
untroubled by ethical considerations.

This pattern may explain why it's hard to find evidence that divesting from a stock causes the company to alter its behavior: after all, if those with strong objections to a company's behavior divest, the remaining shareholders who don't care that much receive higher returns. Win-win! Sort of.

The question of how pressuring a company to respond to certain social responsibilities affects returns from that company is not fully clear. Dimson, Marsh and Staunton offer some preliminary evidence that when socially activist shareholders pressure a company for change, the company's stock price often rises in the short-run--but then perhaps does not rise so quickly after that. This suggests what they call the "washing machine" socially conscious investment strategy:


To maximize the probability of success as an activist, asset owners might consider the “washing machine” strategy advocated by Gollier and Pouget (2014). They argue that a large investor can generate continuing outperformance by buying non-responsible companies and turning them into more responsible businesses. After they have been cleaned up, the shares may then be sold at a price that reflects the accomplishments of the activist.


Back in the day, I headed a college committee that recommended that the college divest its endowment holdings of South African mining companies. The standard list of "sin stocks" often includes alcohol, tobacco, gambling, "adult entertainment," and weapons. Other lists would focus on how firms treat their workers, or on what firms require on how their suppliers (or the suppliers of their suppliers) treat labor. More recently, there are sometimes proposals to pressure or divests from companies that are involved with fossil fuels or companies that are involved in biotechnology that can lead to products based on gene modifications. Another recent category is to pressure companies that are deemed to have pushed too hard to reduce their taxes. "Despite its credentials as a purveyor of Fair Trade coffee, Starbucks has become a boycott target because of its UK tax avoidance practices. Despite its inclusion in the Dow Jones Sustainability World Index and FTSE4Good Index, Medtronic has been excoriated in the USA for its tax-inversion scheme. Amazon, a company praised for environmental initiatives, is accused in Europe and the USA of anticompetitive tax arrangements."

If an investor is considering an strategy of buying either the entire market in an index fund, or just ruling out a few companies from that entire market index, the difference in terms of return on investment or diversification will be small. But if you start ruling a large number of companies, the effects on returns and diversification can increase accordingly. For those concerned about corporate social responsibility, it seems potentially counterproductive to engage in these issues by disengaging from owning any of the relevant companies, while the alternative of participating in shareholder activism may be a more productive path.