The Rise of Mortgages: Too Much House?

Economists sometimes argue that more choices must either be neutral or good. The logic is that if you don't want any of the additional choices, then don't take them, and you are equally well off. If you do want one of the additional choices, you are then better off.  Of course, this argument is not airtight. It assumes that there are no costs of evaluating more choices, and it presumes that the chances of choosing wisely and well are not diminished as the number of choices rises.

For one case in which these issues arise, consider the many changes in financial markets and government regulations that have made it vastly easier for people to take out a mortgage loan and buy a house. I certainly view the option to take out a mortgage loan as beneficial to me, because rather than spend years saving up enough money to buy a house outright, I can live in the house while paying down the mortgage over time. But this additional choice also brings dangers. People are often notably bad at evaluating situations where the costs and benefits are spread out over time. We find ourselves in situations where we would like to save money, or start exercising more, or eating healthier--but always starting tomorrow, never today. Many people find themselves running up credit card bills to have the benefits of consumption now, with the costs of paying shoved into the future. Thus, it wouldn't be surprising to find that when the option to take out a long-term mortgage becomes available, people are tempted to over-borrow.

My grandmother used to have a saying about people who bought all the house that the bank told them they could afford, and often a little more: "You can't eat bricks and mortar."

For example, one common rule-of-thumb when applying for a mortgage is that you can "afford" a house if the loan payments will be 30% or less of gross income. Of course, this rule is based on the likelihood that the loan will be repaid to the bank, not on whether you will feel good in a year or five years about how much you have spent. If someone told you what was the most you could spend on some other purchase--like a car or a vacation--you probably wouldn't feel semi-obligated to spend that actual amount.

Òscar Jordà, Moritz Schularick, and Alan M. Taylor explore some big-picture issues with this dynamic in "Mortgaging the Future?" written as an "Economic Letter" for the Federal Reserve Bank of San Francisco (March 23, 2015, 2015-09). From their abstract: "In the six decades following World War II, bank lending measured as a ratio to GDP has quadrupled in advanced economies. To a great extent, this unprecedented expansion of credit was driven by a dramatic growth in mortgage loans. Lending backed by real estate has allowed households to leverage up and has changed the traditional business of banking in fundamental ways. This “Great Mortgaging” has had a profound influence on the dynamics of business cycles." 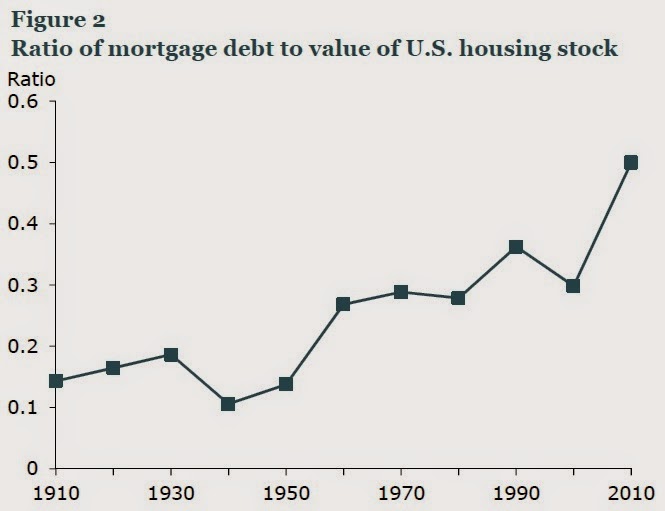 Across the high-income countries of the world, mortgage lending has become the dominant business for banks, rather than lending to businesses or making other kinds of loans to individuals. 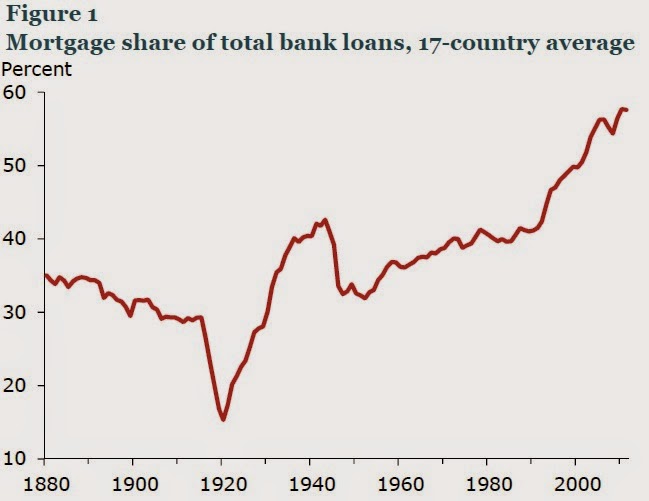 From an overall macroeconomic point of view, bank lending as a share of GDP is rising, and much of that lending is due to increases in housing lending. Jordà, Schularick, and Taylor present some correlations across data from 17 countries and reach this conclusion:

The vast expansion of bank lending after World War II is one of the most extraordinary developments in the history of modern finance and macroeconomics.... [I]n the postwar period an above average mortgage-lending boom unequivocally makes both financial and normal recessions worse. ...  In contrast, booms in nonmortgage credit have virtually no effect on the shape of the recession in the same postwar period. Why the difference? At this point we can only speculate. A mortgage boom gone bust is typically followed by rapid household deleveraging, which tends to depress overall demand as borrowers shift away from consumption toward saving. This has been one of the most visible features of the slow U.S. recovery from the global financial crisis ...

In other words, the tacit encouragement from regulators, the financial industry, and the tax code to buy a house doesn't just run a risk that some homebuyers will overborrow. It also makes recessions worse and, as in 2007-2009, can even threaten broader financial stability.

At the household level, this sharpens the question of what we think of as the expected or normal amount of housing consumption. Back in  the early 1970s, the average new single-family house had 1,660 square feet, which peaked at over 2,500 square feet for a new house in 2007, and then declined a bit after bubble in housing prices popped.

Let me offer a speculation: Say that the rules for taking our a mortgage had been tighter over time. Imagine the standard was that banks would decide what you can afford based on 25% of your income, not 30%, or that mortgages were typically available for 15 or 20 years, not 30. My guess is that bank lending for mortgages would be smaller. The size of homes might well have increased, but not as quickly. Less of US capital investment would be allocated to housing, which would make it possible for more to be allocated to investments that can raise the long-term standard of living. The US economy would be less vulnerable to recession. People who were less stretched in making their mortgage payments would be less likely to face default or foreclosure. And my guess is that many of us would have adapted perfectly well to living in smaller homes, because the smaller size would be usual and typical and what we expect. The money we weren't spending on housing would easily be spent on other forms of consumption.

In short, the push for making mortgage loans more easily available is sometimes presented as if it can only make people better off. Either they can borrow the same amount as before, or they can decide that they would prefer to borrow more. But making mortgages more available also has number of tradeoffs, both for individuals who "can't eat bricks and mortar" and for the broader economy.
Posted by Timothy Taylor at 10:00 AM