A wide array of evidence suggests that if you split all income in an economy into either labor or capital income, the labor share has falling in the last couple of decades. For example, here's a previous post referring to comments from the 2013 Economic Report of the President:


"The “labor share” is the fraction of income that is paid to workers in wages, bonuses, and other compensation. ... The labor share in the United States was remarkably stable in the post-war period until the early 2000s. Since then, it has dropped 5 percentage points. .... The decline in the labor share is widespread across industries and across countries. An examination of the United States shows that the labor share has declined since 2000 in every major private industry except construction, although about half of the decline is attributable to manufacturing. Moreover, for 22 other developed economies (weighted by their GDP converted to dollars at current exchange rates), the labor share fell from 72 percent in 1980 to 60 percent in 2005."

Or here's a post with comments from the Global Wage Report 2012/13 by the International Labour Organization:


"The OECD has observed, for example, that over the period from 1990 to 2009 the share of labour compensation in national income declined in 26 out of 30 developed economies for which data were available, and calculated that the median labour share of national income across these countries fell considerably from 66.1 per cent to 61.7 per cent."


Other posts on this subject have referred to a report from the Congressional Budget Office, reports from research by Federal Reserve economists, and a 2013 paper in the Brookings Papers on Economic Activity. While the overall fact pattern of a falling labor share seems well-established, digging down into what it actually means reveals some complexities that are often not much discussed. Matthew Rognlie considers some of these issues in "Deciphering the fall and rise in the
net capital share," presented today at the Brookings Papers on Economic Activity spring conference. Here are some of my own thoughts about the issues.

1) The capital labor movement isn't about inequality of incomes.

All wages and compensation are counted as "labor income." Perhaps there are some underlying common reasons why the rising share of capital income and greater inequality of labor income are happening at the same time, but they are not the same thing.

2) Should self-employment income be considered as labor or capital?

If you own a business, then part of your income from that business is a return to your labor, while another part is a return to the risk-taking of business ownership, and should conceptually be considered a return to capital. At certain times, this distinction can make a big difference. Rognlie refers to a debate among economists back in the 1950s, after several decades of a falling number of farmers. Most of the farmers were self-employed, and thus their income was categorized as capital income. As more workers moved from farm to non-farm employment, their income then became treated as labor income. There are a variety of ways to split up self-employment income into labor and capital components, none of them fully satisfactory. However, there hasn't been a big upward trend in self-employment income in recent decades, so such measurement choices are not going to be much help in explaining the rise in share of income going to capital.

3) Should the focus be on net capital or gross capital?

The difference between "gross" and "net" is that "net" takes depreciation of past  capital into account. Rognlie explains why the difference matters using an example from an industry where output is produced by short-lived software. As a result, the producer spends a lot on capital every year, but almost all of it is replacing the obsolete software that depreciated the previous year.

For instance, in an industry where most of the output is produced by short-lived software, the gross capital share will be high, evincing the centrality of capital’s direct role in production. At the same time, the net capital share may be low, indicating that the returns from production ultimately go more to software engineers than capitalists—whose return from production is offset by a loss from capital that rapidly becomes obsolete. Both measures are important: indeed, a rise in the gross capital share in a particular industry is particularly salient to an employee whose job has been replaced by software, and it may proxy for an underlying shift in distribution within aggregate labor income—for instance, from travel agents to software engineers. The massive reallocation of gross income in manufacturing from labor to capital, documented by Elsby et al. (2013), has certainly come as unwelcome news to manufacturing workers. But when considering the ultimate breakdown of income between labor and capital, particularly in the context of concern about inequality in the aggregate economy, the net measure is likely more relevant. This point is accepted by Piketty (2014), who uses net measures; the general rationale for excluding depreciation is pithily summarized by Baker (2010), who remarks that “you can’t eat depreciation.”

Here are two figures, with the first one showing the capital share based on gross capital, and the second showing the capital share based on net capital. Capital share is clearly rising in recent years with gross capital, as shown in the bottom figure. With net capital, the rise is more modest. It looks more as if there was a drop-off in capital shares in the 1970s which has since been reversed. Again, the underlying difference here refers to changes over time in how quickly capital investment is wearing out, and to changes in what share of current capital investment is replacing old depreciated capital vs. adding to the overall capital stock. 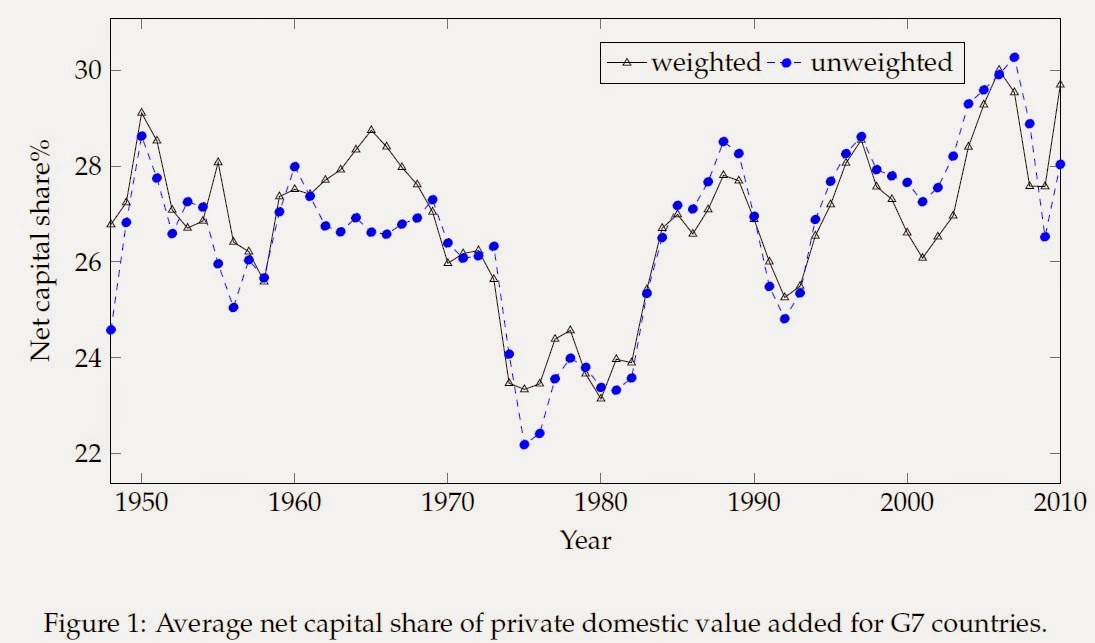 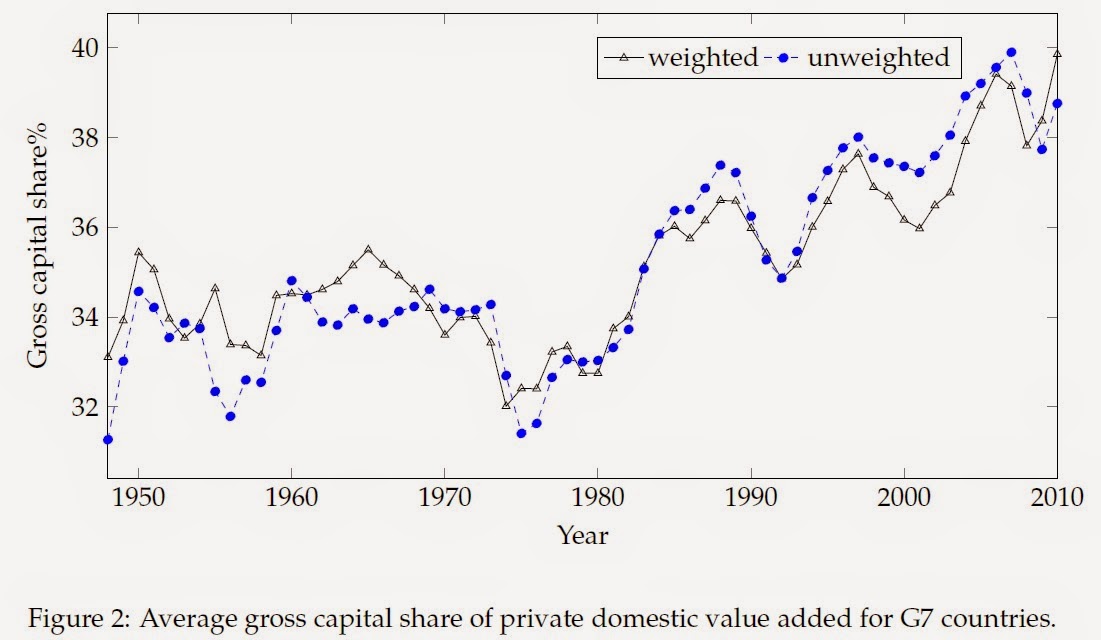 It's worth noting that the conclusion that the rising capital share mostly goes away if you look at net capital rather than gross capital is not at this stage a consensus finding. For an argument that using net capital makes the capital share fall, but by a more modest amount, you can check Loukas Karabarbounis and Brent Neiman, “Capital Depreciation and Labor Shares Around the World: Measurement and Implications,” Technical Report, National Bureau of Economic Research 2014. 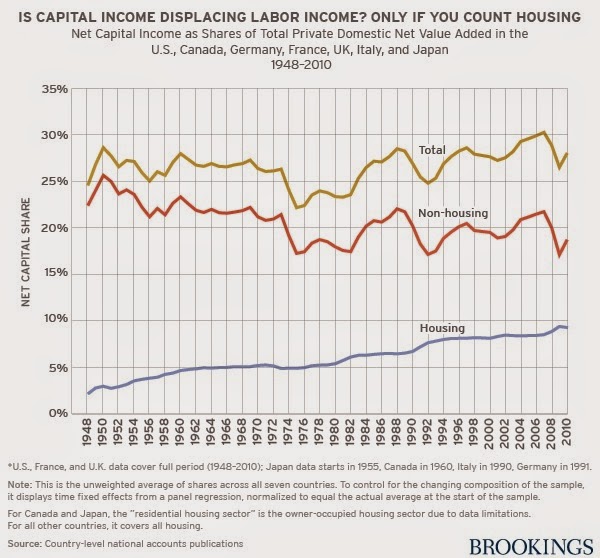 Many noneconomists don't think about owning a house as a form of capital ownership. But from the viewpoint of economic statistics, a homeowner is someone with a piece of capital--a house--that is providing a service. Of course, homeowners do not go through the formality of paying rent to themselves. Rognlie explains it this way:

Income from housing is unlike most other forms of capital income recorded in the national accounts: in countries where homeownership is dominant, most output in the housing sector is recorded as imputed rent paid by homeowners to themselves. ... Indeed, imputed rents from owner-occupied housing should arguably be treated as a form of mixed income akin to self-employment income: in part, they reflect labor by the homeowners themselves. ... [H]ousing has a pivotal role in the modern story of income distribution. Since housing has relatively broad ownership, it does not conform to the traditional story of labor versus capital, nor can its growth be easily explained with many of the stories commonly proposed for the income split elsewhere in the economy—the bargaining power of labor, the growing role of technology, and so on.

The importance of housing in looking at movements of capital and labor income is not a new insight. For example, Odran Bonnet, Pierre-Henri Bono, Guillaume Camille Chapelle, Étienne Wasmer discuss the point in this readable June 30, 2014, note about their own research:"Capital is not back: A comment on Thomas Piketty’s ‘Capital in the 21st Century.’"

When thinking about the long-term evolution of capital and labor income, it becomes important to remember that capital income can mean different things at different times, and land and housing are part of capital, too. It's easier to provide an economic justification for  capital income being paid to those who invest in a productive, job-creating, profit-making firm than it is to justify capital income being paid to a lord from the 19th century who inherited large amounts of land and receives capital income from the rent paid by tenant-farmers. The capital income received by the owner of a factory with a huge and costly physical plant is also not identical in economic meaning to the capital income received by the owner of a firm where the capital depreciates to near-zero almost every year and the value of the firm is based in intellectual property. The rise in capital income as a result of a long-term rise in land and housing prices across the high-income countries is a phenomenon that isn't easily crammed into the usual disputes over whether capital owners are exploiting wage-earners.