ATMs and a Rising Number of Bank Tellers?

The first US bank to install an automatic teller machine (ATM) was a branch of Chemical Bank on Long Island in 1969. After relatively slow growth during the 1970s, there were about 100,000 ATMs across the US by 1990, a total that has now risen to about 400,000. So here's the question: During the rise of ATM machines in US banking, did the number of bank tellers rise or fall?

I would have guessed "fall," and I'm not alone. In a June 14, 2011, interview, President Obama used ATMs a an example of technology displacing labor. He said (I've added punctuation to the raw transcript):


There are some structural issues with our economy where a lot of businesses have learned to become much more efficient with a lot fewer workers. You see it when you go to a bank and you use an ATM, you don't go to a bank teller, or you go to the airport and you're using a kiosk instead of checking in at the gate.

However, James Bessen collected the actual data on ATMs and bank tellers from an array of scattered sources. Overall, the story is that as the ATM machines arrived, the number of bank tellers held steady and even rose slightly. Bessen discusses the interaction between technology and employment in "Toil and Technology," in the March 2015 issue of Finance & Development. Here is Bessen's figure showing the rise in ATM machines and the number of tellers employed. 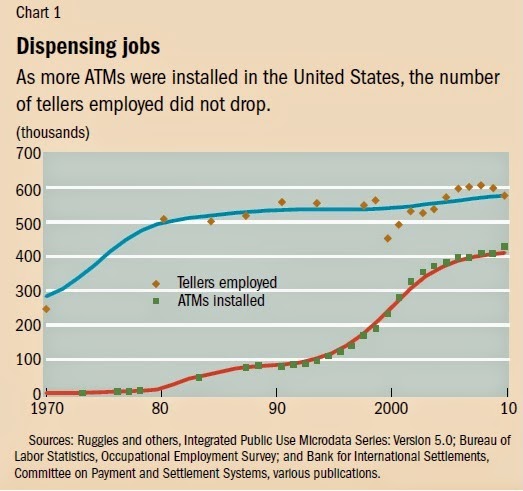 Why did the number of bank tellers rise even as ATMs became prevalent? Bessen highlights two changes. One major change wass the spread of opening more bank branches. Bessen points out that you could now open a branch with fewer bank tellers than before; in addition, I'd add that many states were relaxing their rules and allowing banks to open more branches both within and between states during the 1980s and 1990s in particular. The other major change was that the job of a teller changed. Banks began to offer more services, and tellers evolved from being people who put checks in one drawer and handed out cash from another drawer to people who solved a variety of financial problems for customers.

The broader point, of course, is that just looking at how technology can substitute for a certain job is only one part of the analysis. Other parts include how regulations that affect that industry and area of employment are changing, and how new technology may cause jobs to evolve and shift in a way that benefits workers. Bessen argues that the main problem is not the "end of work," but instead the problem is that many workers have a difficult time obtaining the skills they need so that their work can complement the new waves of technology as they arrive. As a result, we observe a combination of stagnant wages for many workers who have been unable to update their skills as needed, combined with much higher wages for those who have the new skills (which contributes to wage inequality), all combined with employers who complain that not enough employees already have the skills the employer wants. As Besson writes:

New information technologies do pose a problem for the economy. To date, however, that problem is not massive technological unemployment. It is a problem of stagnant wages for ordinary workers and skill shortages for employers. Workers are being displaced to jobs requiring new skills rather than being replaced entirely. This problem, nevertheless, is quite real: technology has heightened economic inequality. ... The information technology revolution may well be accelerating. Artificial intelligence software will give computers dramatic new capabilities over the coming years, potentially taking over job tasks in hundreds of occupations. But that progress is not cause for despair about the “end of work.” Instead, it is all the more reason to focus on policies that will help large numbers of workers acquire the knowledge and skills necessary to work with this new technology.