The Rare Earths Shortage: A Crisis with a Supply and Demand Answer

Rare earths had a moment in the media spotlight in late 2010 and early 2011. The story goes that in September 2010, a Chinese and a Japanese ship collided in waters claimed by Japan. Japan detained the captain of the Chinese ship. China appears to have responded (although China denied this) by placing an embargo on sales of rare earths to Japan. It came to public attention that over the last two decades, rare earth mining operations had been opening in China, but often closing in the rest of  the world, and more than 95% of rare earth production was happening in China.

A number of chin-stroking analyses and warnings followed. As one example, Katherine Bourzac wrote an article in the April 2011 issue of Techology Review called "The Rare-Earth Crisis," and subtitled "Today’s electric cars and wind turbines rely on a few elements that are mined almost entirely in China. Demand for these materials may soon exceed supply. Will this be China’s next great economic advantage?" Here's a sample of Bourzac's argument:

But even without Chinese restrictions and with the revival of the California mine, worldwide supplies of some rare earths could soon fall short of demand. Of particular concern are neodymium and dysprosium, which are used to make magnets that help generate torque in the motors of electric and hybrid cars and convert torque into electricity in large wind turbines. In a report released last December, the U.S. Department of Energy estimated that widespread use of electric-drive vehicles and offshore wind farms could cause shortages of these metals by 2015.

What would happen then is anyone’s guess. There are no practical alternatives to these metals in many critical applications requiring strong permanent magnets—materials that retain a magnetic field without the need for a power source to induce magnetism by passing an electric current through them. Most everyday magnets, including those that hold notes on the fridge, are permanent magnets. But they aren’t very strong, while those made from rare earths are tremendously so. Alloys of neodymium with iron and boron are four to five times as strong by weight as permanent magnets made from any other material. That’s one reason rare-earth magnets are found in nearly every hybrid and electric car on the road. The motor of Toyota’s Prius, for example, uses about a kilogram of rare earths. Offshore wind turbines can require hundreds of kilograms each.

New mining activity, not only at Mountain Pass but also in Australia and elsewhere, will increase supplies—but not enough to meet demand for certain critical metals, particularly dysprosium, in the next few years. ... Because rare earths make such excellent magnets, researchers have put little effort since the early 1980s into improving them or developing other materials that could do the job. Few scientists and engineers outside China work on rare-earth metals and magnet alternatives. Inventing substitutes and getting them into motors will take years, first to develop the scientific expertise and then to build a manufacturing infrastructure. ...  Few experts express optimism that there will be enough rare-earth materials to sustain significant growth of clean energy technologies like electric cars and wind power, which need every possible cost and efficiency advantage to compete.

So what in fact happened after the rare earths crisis of 2010-11? For the basic storyline, here's a price chart for rare earths--which are usuall mined together and then separated into constituent parts--in dollars per ton, from the industry research and consulting company TRU Group. 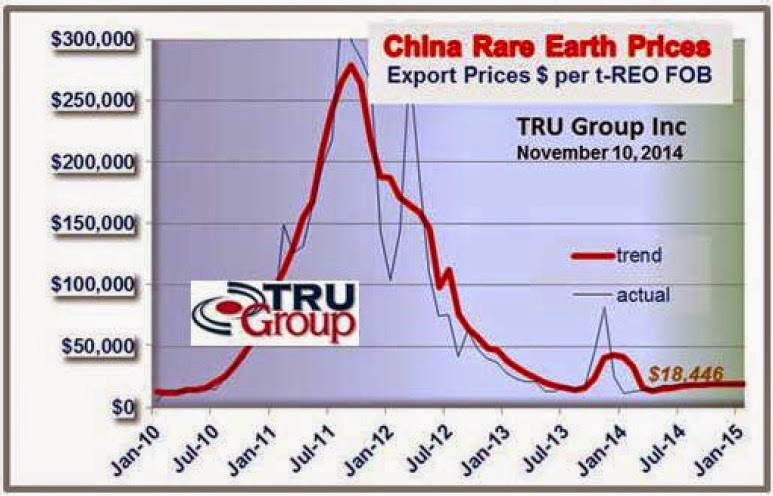 Clearly, the story is that prices spiked, but it was not a lasting crisis. Instead, it's one more example of free market forces at work. Eugene Gholz tells the story in "Rare Earth Elements and National Security," an October 2014 report written for the Council on Foreign Relations.

As background, according to the US Geological Survey, "The rare earths are a relatively abundant group of 17 elements composed of scandium, yttrium, and the lanthanides [which are the elements with atomic numbers 57  6o 71]. The elements range in crustal abundance from cerium, the 25th most abundant element of the 78 common elements in the Earth's crust at 60 parts per million, to thulium and lutetium, the least abundant rare-earth elements at about 0.5 part per million." The USGS reports that rare earths are heavily used as catalysts, while other main uses are in metallurgical applications and alloys, permanent magnets, and glass polishing.

In late 2010 and early 2011, prices for rare earths spiked in large part because of a response to the worrisome news stories. Gholz explains that spot prices for rare earth elements rose "especially as
downstream users—companies that incorporate REEs [rare earth elements] into other products—filled inventories to protect themselves from future disruptions. Speculators also bought the stocks of many small mining companies that promised to develop new sources of rare earths around the world. But once buyers realized that actual supply to consumers around the globe was not that tight, prices plunged." Gholz's story of what happened reads like a supply and demand primer: supply rises, demand falls, substitutes and alternatives found.

When prices rise and it appear that a dominant producer might be unreliable, entry to the market occurs.

Despite its relatively small size, the rare earths market managed to attract plenty of interest outside China prior to the 2010 supply scares. Motivated by expected increases in demand, investors in the United States, Japan, and Australia were already opening rare earth mines and building new processing capabilities by 2010, and other investors were moving ahead on mines around the world in places like Canada, South Africa, and Kazakhstan. The major investments made by Molycorp in the United States and Lynas in Australia and Malaysia started delivering non-Chinese rare earths to global markets by 2013. When rare earth prices surged in 2010, even more potential entrants swarmed. Hundreds of companies around the world started raising money for new mining projects. Rhodia, long established as a leading rare earths processor in Europe (physically in France though now owned by Belgian chemical company Solvay), ramped up its use of its existing plant capacity and accelerated plans to recycle rare earths, effectively creating a new source of supply to the global market. These new, non-Chinese sources hold the potential to profoundly change market dynamics. Although Chinese producers will still contribute a substantial majority of supply, competition from the rest of the world will moderate Chinese pricing power and feed high-priority end uses even in the event of a cutoff of all Chinese exports.

An embargo or other supply disruption makes users think hard about an input that may have been relatively cheap before, meaning that the users had previously focused their attention on maximizing efficient use of other, more costly inputs. The new attention to the disrupted input can yield “low-hanging fruit” adjustments. For example, at the time of China’s 2010 export embargo to Japan, the largest-volume use of rare earths was in gasoline refining. But gasoline refining still works without rare earth catalysts, just slightly less efficiently; in fact, at the peak of the 2011 rare-earths price bubble (well after theembargo crisis), some refiners stopped using the rare earth catalysts to save input costs. ...

The magnet market also adapted through “demand destruction.” Companies such as Hitachi Metals that make rare earth magnets (now including in North Carolina) found ways to make equivalent magnets using smaller amounts of rare earths in the alloys. Some users remembered that they did not need the high performance of specialized rare earth magnets; they were merely using them because, at least until the 2010 episode, they were relatively inexpensive and convenient. Whenthe price rose following China’s alleged embargo, users turned to simpler (and less material-intensive) rare earth magnets or even to magnets that included no rare earths at all. Such adjustments take a little time, thought, and design effort, but their availability means that supply interruptions
often have a less dramatic effect than one might expect, based on precrisis demand.

Although China tried to put export controls on rare earths during the 2000s, the controls were often circumvented:


Comparing official Chinese export statistics to statistics on downstream rare-earth oxide consumption in countries like Japan reveals that probablyas much as 20,000–30,000 tons of rare earth oxides were smuggled out of China each year in the late-2000s, roughly 15 to 30 percent of official production, depending on the year.

Far from Chinese technical dominance, the striking feature of recent developments in rare earth markets has been the continuation of U.S., European, and Japanese technological leadership. Molycorp’s reopened mine and separation facility use a suite of new technologies that have increased the purity of extracted rare earth products, substantially reduced the environmental impact of the mining and chemical processing, and drastically lowered the cost of American production compared to the Mountain Pass operations that shut down in 2002. Japanese companies are leading the way with new, low-dysprosium magnet technologies, and Rhodia in Europe has made tremendous
progress in developing viable rare-earth recycling operations. In the current market, China looks like a technical laggard—for example, using old, environmentally destructive extraction technologies— rather than a technical leader.

Overall, Gholz writes: "Future crises are unlikely to seem so perfectly orchestrated to make the United States and its allies vulnerable: the materials in question may be more prosaic or the country where supplies are concentrated may loom less ominously than China. But even in the apparently most-dangerous case of rare earth elements, the problem rapidly faded—and not primarily due to government action."