Snapshots of US Agriculture

An extraordinary shift happened in the US agricultural sector during the last century or so. Robert A. Hoppe lays out the facts in his report "Structure and Finances of U.S. Farms: Family Farm Report,
2014 Edition," written as Economic Information Bulletin Number 132, December 2014, for the U.S. Department of Agriculture. Indeed, when I hear arguments about how difficult (impossible?) it will be for the US workforce to adjust to the coming waves of technology, my thought quickly jump to the shift in agriculture.

For example, back around 1910, about one-third of all US workers were in agriculture (blue line, measured on the right-hand scale).  It's now about 2%. The absolute number of jobs in agriculture declined, too, but the big change was that more than 100% of the job growth in the U.S. was in the non-agricultural sector. I haven't researched the point, but my guess is that many people around 1910 would have viewed these changes as somewhere between  impossible and inconceivable. 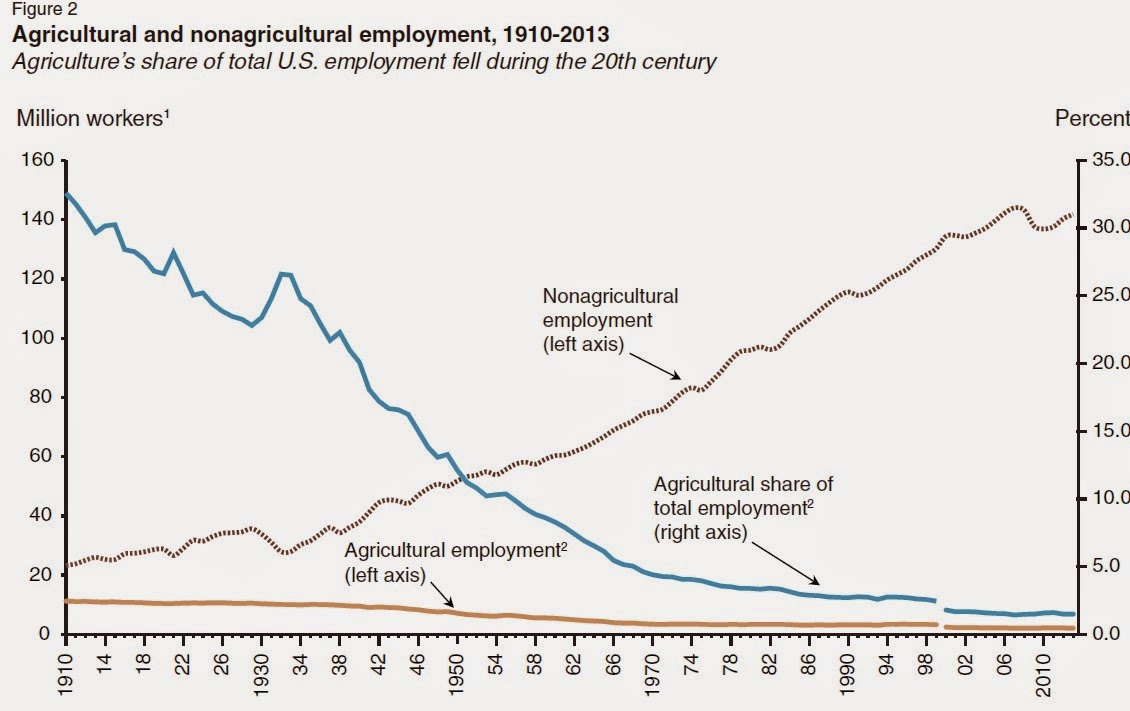 The total actual acres operated by US farms has barely budged in the last half-century. But as the agricultural productivity steadily rose, the number of farms sharply declined, especially during the half-century from about 1930 to 1980. 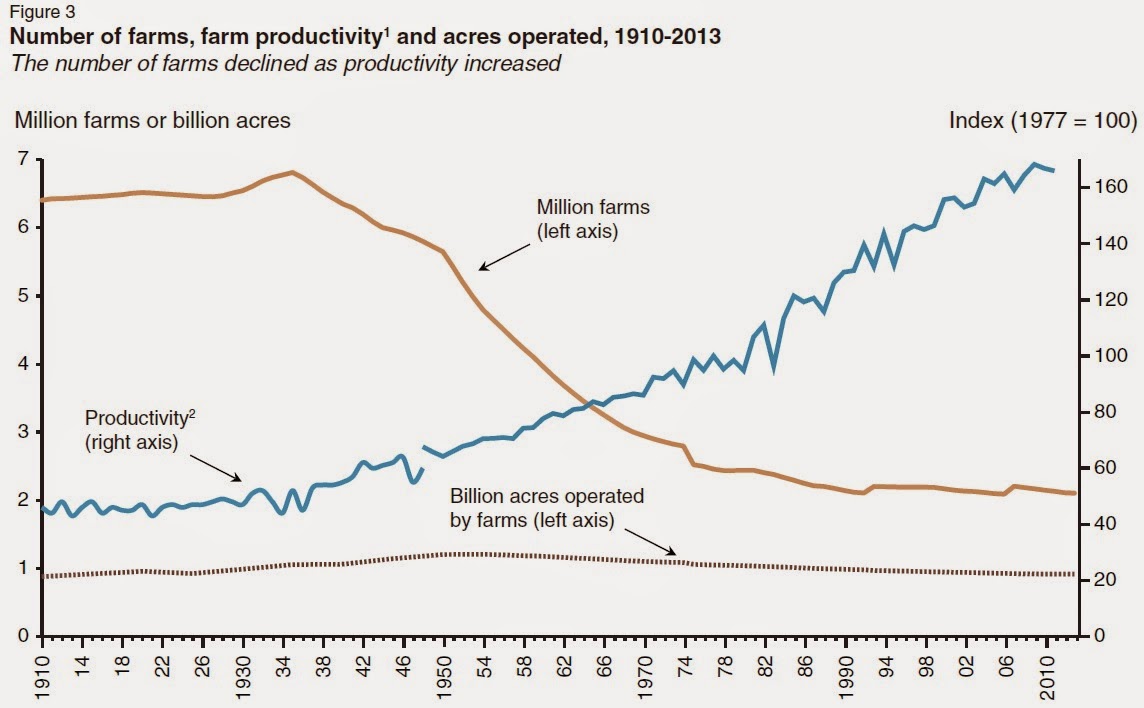 In the current U.S. farm sector, about 90% are small farms measuring less than $350,000 per year in "gross cash farm income" (this is the revenue for the farm before subtracting expenses, not the income to the farmer). These small farms represent about half the land operated, and one-quarter of the total value of production. 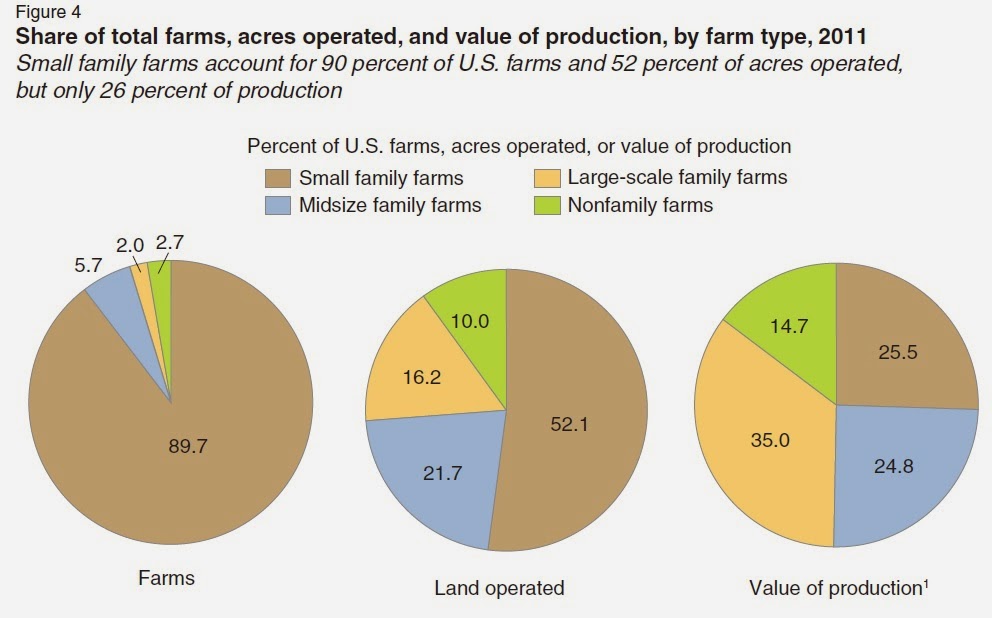 When one looks across various commodities, the share of small farms is bigger in some (poultry, hay livestock) than others (dairy, cotton). But interestingly enough, a substantial share of production in each area still comes from small and medium firms, not just from large ones--although average profits are smaller on small farms. 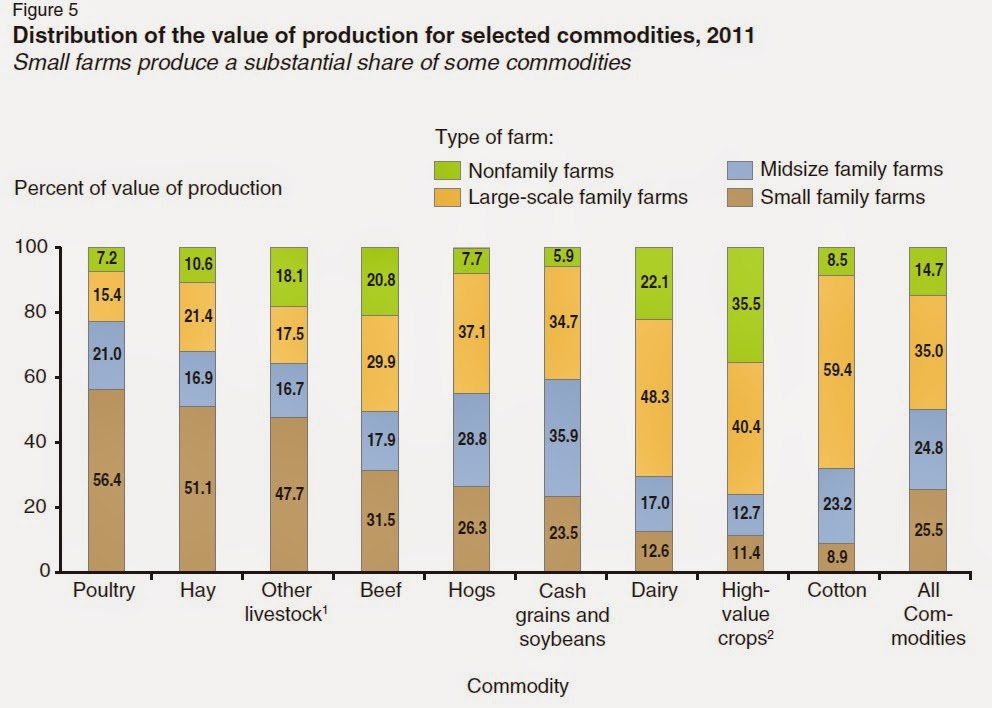 This ability of small and medium firms to compete with larger firms means that although farm sizes are growing over time, large firms do not have a dramatic cost advantage over smaller ones--at least in a number of crops. as Hoppe notes:


"Extensive economies of scale do not exist in farming. Most cost reductions can be attained at a relatively small business size, compared with other industries, even though farming tends to be capital intensive in the United States. ... Crop production requires local knowledge of soils, pests, and weather while livestock production requires knowledge of livestock and how they respond to local conditions. This knowledge takes
time to acquire and is not easily transferred to others."


In the Winter 2014 issue of the Journal of Economic Perspectives, Daniel A. Sumner explores variuls explanations for the growth of farm size. in "American Farms Keep Growing: Size, Production, and Policy." (Full disclosure: I've been Managing Editor of the JEP since the first issue in 1987. All JEP articles back to the first issue are freely available online courtesy of the American Economic Association.) Sumner focuses on the interaction of managerial capability and agricultural technology in leading to larger farms. He wrote:


Changes in farm size distributions and growth of farms seems closely related to technological innovations, managerial capability, and productivity. Opportunities for competitive returns from investing financial and human capital in farming hinge on applying managerial capability to an operation large enough to provide sufficient payoff. Farms with better managers grow, and these managers take better advantage of innovations in technology, which themselves require more technical and managerial sophistication. Farms now routinely use outside consultants for technological services such as animal health and nutrition, calibration and timing of fertilizers and pesticides, and accounting. The result is higher productivity, especially in reducing labor and land per unit of output. Under this scenario, agricultural research leads to technology that pays off most to more-capable managers who operate larger farms that have lower costs and higher productivity. The result is reinforcing productivity improvements.