There's a long tradition in political economy, stretching back at least to Plato's discussion of "philosopher-kings," which speculates that the best form of government might be a benevolent dictatorship. In a way, this argument is bulletproof, because any response that points out the real-world problems of dictatorship can be countered by saying that it's just not sufficiently benevolent. But in my lifetime, the best example anyone could cite of a benevolent dictatorship that seemed to be working pretty well was Lee Kuan Yew, who was the official leader of Singapore from 1959 to 1990, and the unofficial leader for some years after that. He died on Monday at the age of 91.  Thus, it seems a useful time for a quick review of the economy he left behind.

In some ways, the most straightforward case for Lee Kuan Yew is in the basic economic statistics of long-term growth. Here's a figure using World Bank data showing per capita GDP in Singapore, adjusted for inflation. During the 53 years from 1960 to 2013, Singapore's economy averaged more than 5% annual growth on a per person basis. For perspective, Singapore's per capita GDP was about 16% of the US level in 1960, and now is almost 80% of the US level. 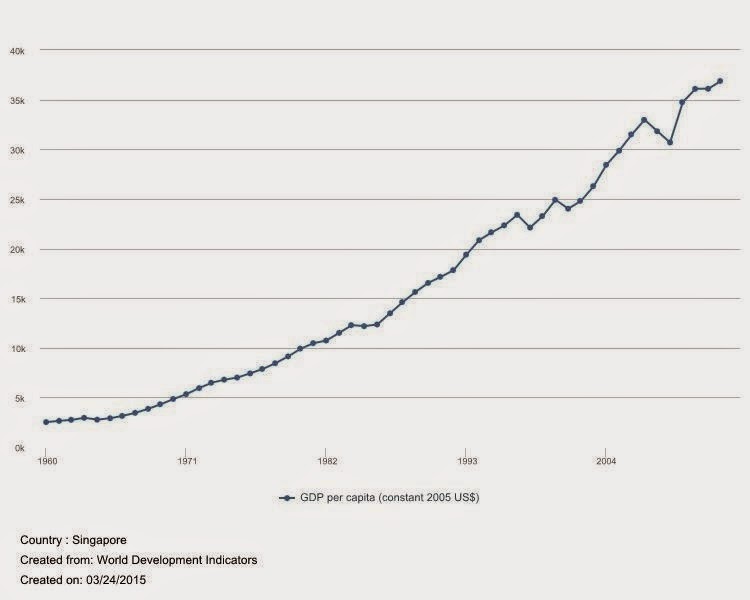 "GDP tripled from less than US$100 billion in 2000 to almost US$300 billion in 2013. Strong growth and low unemployment and inflation have been achieved along with some strong social indicators (e.g. high life expectancy and home ownership). At the same time, however, compared to high-income peers, the labor share of income is low and inequality and the cost of living are high, adversely affecting some population groups. Key supporting factors for Singapore’s strong growth performance have been a stable macroeconomic environment, continuous reforms to upgrade transportation infrastructure and the broader business climate, and a liberal regime for the inflow of foreign workers. The economy remains well-diversified. Known as a financial center and trading hub, Singapore retains a competitive manufacturing sector which contributes more than one sixth of GDP. ... ... The authorities’ plan to raise social and infrastructure spending by 1−2 percent of GDP over the medium term should help reduce the large current account surplus. Financial regulation and supervision is among the best globally and Singapore is a frontrunner in implementing global regulatory reforms."


Here are a few other points that caught my eye. Singapore's population has risen by about one-third since 2000, most of that from foreign immigration (the birthrate in Singapore is quite low). In the last few years, the government has sought to slow the inflow of immigrants, and instead to provide subsidies for firms to make investments that can raise the productivity of land and labor--thus also seeking to assure that the economy remains more than just a financial center, but is diversified into other sectors. In 2013, unemployment fell to 1.9%.

Many of immigrants since 2000 worked in lower-wage jobs, and so inequality in Singapore has risen since 2000. The rise was particularly marked in the 2000-2006 period. 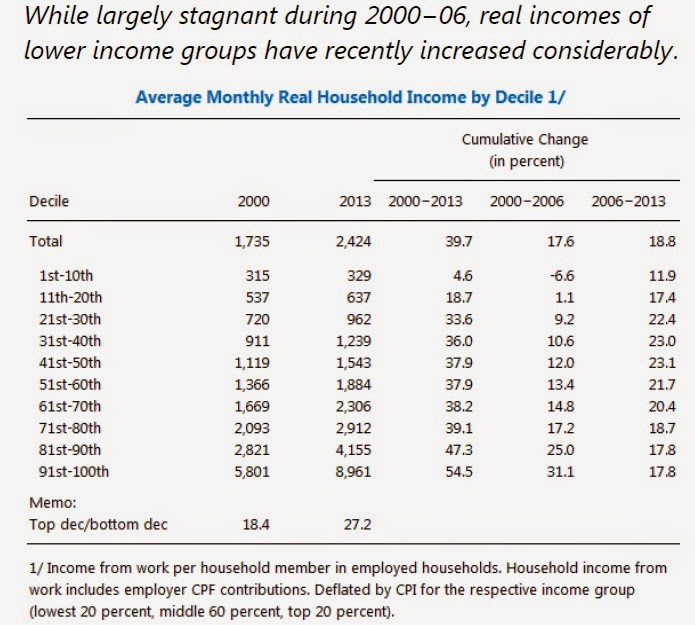 Overall, the level of income inequality in Singapore as measured by the Gini coefficient is roughly at US levels, although redistributive tax and spending policies do reduce that level somewhat. 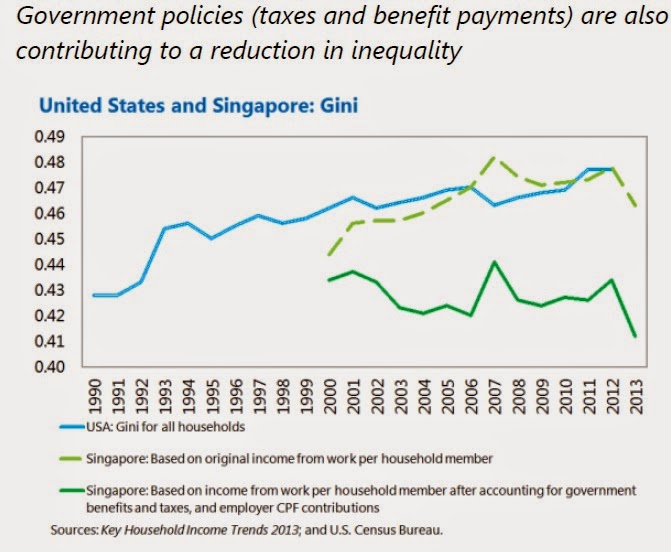 Against Singapore's economic gains under Lee Kuan Yew, there has also been a legacy of repression of free speech and repression of political opposition. There have been laws about everything from spitting on the sidewalk to improper disposal of used chewing gum. For more severe crimes, there has been a threat of harsh legal penalties including caning and capital punishment. Back in the 1990s, one wag christened Singapore as "Disneyland with the death penalty."

Like dictators everywhere, Lee Kuan Yew made the claim that excesses were justified by the necessity of bringing civil order and economic prosperity to a potentially fragmented multi-ethnic and multi-religious country. Singapore had been a British colony, then controlled by Japan during World War II, then again under British control, then merged into Malaysia in 1963, before becoming a separate and independent country in 1965.  In a New York Times profile in 2010, Lee was quoted as saying: “I’m not saying that everything I did was right,” he said, “but everything I did was for an honorable purpose. I had to do some nasty things, locking fellows up without trial.” His obituary in the New York Times quoted this comment: "Many people say, ‘Why don’t we open up, then you have two big parties and one party always ready to take over?’ “ Mr. Lee said in a speech in 2008. “I do not believe that for a single moment.” He added: “We do not have the numbers to ensure that we’ll always have an A Team and an alternative A Team. I’ve tried it; it’s just not possible.”

On the other side, by the standards of murderous and genocidal dictators around the world--which of course is setting the bar dismally low--the level of political repression in Singapore was not very extreme. Lee Kuan Yew did start backing away from formal control of government back in the early 1990s, a quarter-century before his death. Opposition parties won a substantial share of the vote int he 2011 elections. While he was certainly well-to-do economically, he did not pile up personal riches beyond the dreams of avarice. He presided over a government that hired top managers from the public and private sector and strongly discouraged official corruption.

Lee Kuan Yew, taking his economic and political record as a whole, is probably about as close an example of a benevolent dictator as the real world  in modern times can offer.  I feel incapable of rendering any final judgement on his career. Singapore's economic and political path may not have been the best, but it was also far from the worst. Of course, such judgments are not up to me anyway, but instead are most appropriately made by the the people of Singapore as their country evolves after the passage of their nation's founding father.