A standard pattern of long-term economic development is that a country goes through a period of higher savings and investment, along with correspondingly lower consumption levels. After the growth spurt, consumption levels rise again. For illustration, here's a figure from a chapter by
Jutta Bolt, Marcel Timmer, and Jan Luiten van Zanden appearing in the OECD report from last fall, How Was Life? Global Well-Being Since 1820, which can be read online here.

As the figure shows, countries like Japan and Korea had substantial drops in their ratio of consumption to GDP, reflecting rises in saving and investment, but then consumption as a share of rose again. Technological leaders like the US and German economies show much more stability in their consumption/GDP ratio looking back a couple of centuries. Poorer countries back in 1950 like China and Ethiopia have high consumption/GDP ratios, although it's intriguing that Ethiopia is showing a drop in consumption/GDP--and thus a rise in investment--over the last decade or so. 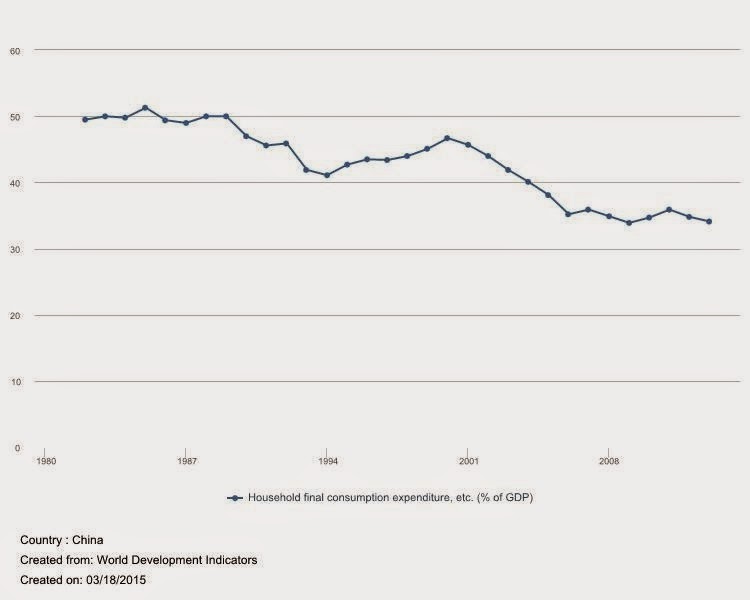 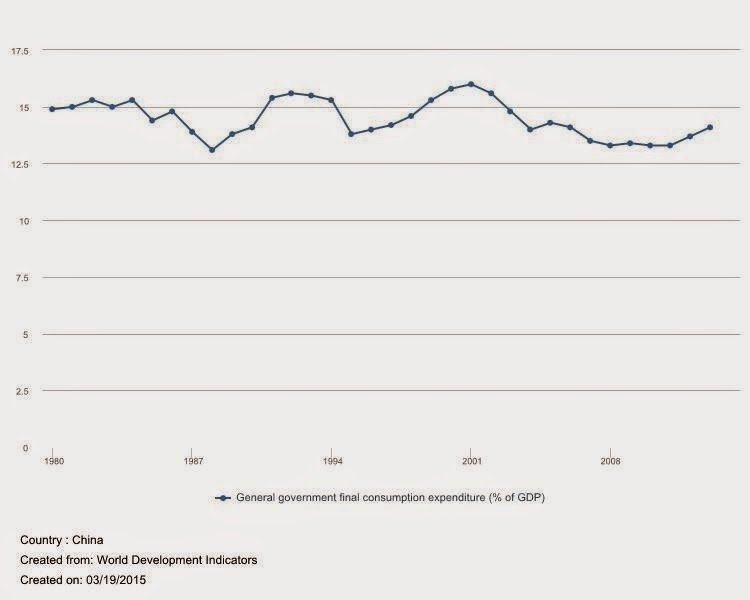 Here are a few thoughts on these patterns:

1) For perhaps a decade or so, there has been a strong argument the next stage for China's economic growth would involve "rebalancing" away from an economy that is so extraordinarily heavily on saving and investment and toward an economy more driven by consumption (see also here and here).

3) The other obvious channel through which consumption could rise is through higher wages and consumption levels by China's households. Again, while household consumption has been rising in absolute levels, it has not been keeping up with growth of GDP, and thus has been falling as a share of GDP.

In well-functioning economies, there is a connection where as firms grow and receive higher revenues and profits, those funds are then cycled back to the broader population in the form of higher wages, as well as higher returns that flow into savings accounts and retirement funds for future consumption. Of course, this process by which firms cycle revenues back to households is always a source of controversy. Various laws and institutions will shape the forms in which money flows back from the firm sector to the household sector, and the level of inequality of incomes that result. But in China's economy, this process of funds flowing from firms back to households seems not to be working very well.

The very low rates of consumption/GDP in China, and the corresponding high levels of saving and investment, are driving the amount of credit in China's economy sky-high (as illustrated here and here). China continues to have possibilities for rapid economic growth in the decades to come. But in the short-term or the middle-term, it also increasingly appears that because of the lack of rebalancing to consumption, China's economy is experiencing a credit and investment bubble in a number of sectors that will not end well.