When a Summer Job Could Pay the Tuition

When I was graduating from high school in 1978, a number of my friends went to the hometown University of Minnesota. At the time, it was possible to pay tuition and a substantial share of living expenses with the earnings from a full-time job in the summer and a part-time job during the school year. Given the trends in costs of higher education and the path of the minimum wage since then, this is no longer true.

Here's an illustration of the point with the University of Minnesota, with its current enrollment of about 41,000 undergraduates,as an example. (The figure is taken from a presentation by David Ernst, who among his other responsibilities is Executive Director of the Open Textbook Network, which provides links to about 170 free and open-license textbooks in a variety of subjects.) 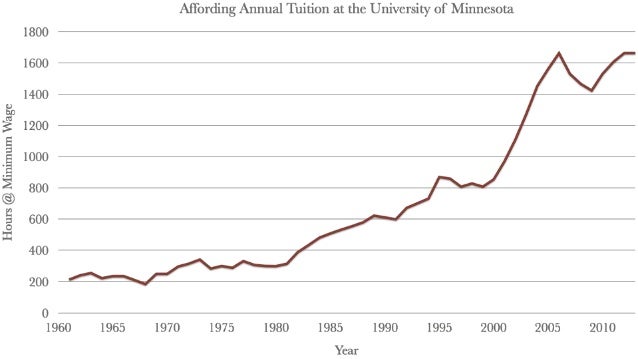 Just to put this in perspective, say that a full-time student works 40 hours per week for 12 weeks of summer vacation, and then 10 hours per week for 30 weeks during the school year--while taking a break during vacations and finals. That schedule would total 780 hours per year. Back in the late 1970s, even being paid the minimum wage, this work schedule easily covered tuition. By the early 1990s, it no longer covered tuition. According to the OECD, the average annual hours worked by a US worker was 1,788 in 2013. At the minimum wage, that's now just enough to cover tuition--although it doesn't leave much space for being a full-time student.