After Japan's Quake, the Intervention to Stabilize the Yen

In the aftermath of the dreadful earthquake and tsunami which hit Japan on March 11, 2011, I completely missed that there was an international intervention to stabilize the exchange rate of the Japanese yen. Fortunately, Christopher J. Neely tells the story and offers useful context in "A Foreign Exchange Intervention in an Era of Restraint." Here are some highlights of what has happened, and what lessons can be drawn: 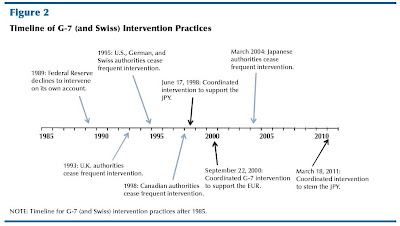 The FX intervention after Japan's March 2011 Quake
Japan's currency started falling sharply after the earthquake. Here's how Neely describes what happened:  "Nevertheless, the G-7 finance ministers and central bank governors held a conference call on the evening of Thursday, March 17 (Friday morning in Tokyo) and decided to conduct a coordinated intervention to weaken the JPY. The G-7 issued a press release containing the following text:


In response to recent movements in the exchange rate of the yen associated with the tragic events in Japan, and at the request of the Japanese authorities, the authorities of the United States, the United Kingdom, Canada, and the European Central Bank will join with Japan, on 18 March 2011, in concerted intervention in exchange markets. As we have long stated, excess volatility and disorderly movements in exchange rates have adverse implications for economic and financial stability. We will monitor exchange markets closely and will cooperate as appropriate (G-7, 2011).

Figure 7 shows that the yen reacted immediately to the intervention announcement, surging
almost 4 percent within the hour against the USD ..."

As Neely reports, the total intervention was about $10.4 billion. Notice that the yen starts stabilizing when the announcement is made, and then moves to a certain level and more-or-less sticks at that level for awhile. The volatility of the yen foreign exchange rate diminishes a great deal. 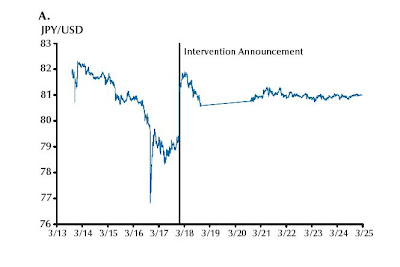 What did the 1998 exchange rate intervention look like?
Neely describes the background to the 1998 intervention this way: "The June 1998 intervention also followed a financial crisis, the 1997 Asian exchange rate crisis in which international capital fled many developing Asian countries, such as Thailand and South Korea. In early June 1998, the main macroeconomic concern was that the yen was unusually weak and weakening further, which made goods and services from other Asian countries less competitive with Japanese goods and
services and harmed those countries’ recoveries. Policymakers probably feared that a falling yen
might cause China to devalue the renminbi (RMB), possibly sparking competitive devaluations, inflation, and instability throughout the region."

The pattern of the 1998 intervention is qualitatively similar to the 2011 intervention: that is, a reaction just before the announcement is made, a movement to a new level, and volatility is stabilized. 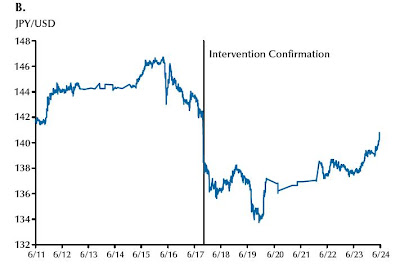 What happened in the September 2000 intervention?
Neely sets the stage: "On January 1, 1999, the ECB began conducting a common monetary policy with a new currency, the euro, for the 11 original nations of the European Monetary Union (EMU). From its inception, the euro tended to depreciate against the dollar, falling from about 1.18 USD/EUR on the inception date to less than 0.85 USD/EUR in September 2000. Doubts about the policies of the new central bank probably contributed to this weakness. At the same time, the U.S. economy was slowing—it would officially enter a recession in March 2001—and the strong dollar/weak euro was perceived as detrimental to U.S. exporters. In addition, the Japanese feared that an overly strong yen would price Japanese exports out of the European markets. Against this backdrop, the ECB, the United States, and Japan decided to intervene to support the euro on September 22, 2000."

Again, the qualitative pattern is the same: the exchange rate takes a jump, but then stabilizes at a new level with diminished volatility. 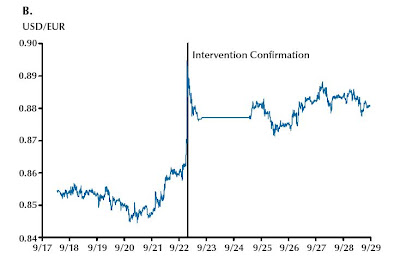 What are the overall lessons?
Neely summarizes the lessons this way: "Since 1995 most advanced governments/central banks have used intervention only very sparingly as a policy tool. Examination of coordinated interventions during this period shows that intervention is not a magic wand that authorities can use to move exchange rates at will. It can be a very effective tool in certain circumstances, however, to coordinate market expectations about fundamental values of the exchange rate and calm disorderly foreign exchange markets by reintroducing two-sided risk."

Those who are talking about pressuring China to adjust its exchange rate vs. the U.S. dollar have a reasonable case to make. But they would be wise to take to heart the practical issues here. Foreign exchange rate intervention can stabilize a disorderly  market in a short-run situation where everyone is betting the currency will move in only one directly, but is not a magic wand to move exchange rates at will.