The most recent World Development Report from the World Bank is centered on the theme: "Gender Equality and  Development." The first chapter of the report focuses on gains that have been made, and I posted earlier today on surprising (to me) conclusion that around the world, gender equality has been largely attained in education and health. However, the second chapter focuses on dimensions of inequality that persist. The chapter focuses certain contexts where a high degree of gender inequality persists: for example, in lack of female participation in certain occupations and in political leadership, and in certain areas or economic groups where females are disadvantaged in many dimensions of life. But to me, the most appalling example of gender inequality is expressed by the problem of the "missing women." Based on evidence from biology and experience in high-income countries, we know that on average, slightly more men are born than women, and that women tend to have longer life-expectancies than men. But when we then apply those known proportions to certain countries and regions, we find that girls are missing at birth, and women are dying too frequently. Some excerpts, with footnotes and most references to tables and figures omitted, as usual:

Skewed sex ratios at birth and 3.9 million women missing under the age of 60
"First, the problem of skewed sex-ratios at birth in China and India (and in some countries in the Caucasus and the Western Balkans) remains unresolved (table 2.1). Population estimates suggest that an additional 1.4
million girls would have been born (mostly in China and India) if sex ratios at birth in these countries resembled those found worldwide. Second, compared with developed economies, the rate at which women die relative to men in low- and middle-income countries is higher in many regions of the world. Overall, missing girls at birth and excess female mortality under age 60 totaled an estimated 3.9 million women in 2008—85 percent of them were in China, India, and Sub-Saharan Africa." 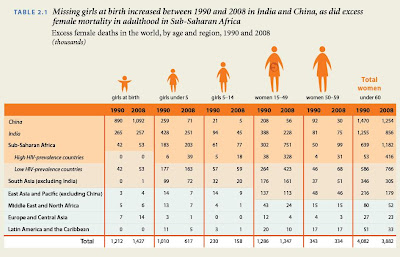 A first main cause: Preference for Sons
"The disadvantage against unborn girls is widespread in many parts of Asia and in some countries in the Caucasus (such as Armenia and Azerbaijan), where the intersection of a preference for sons, declining fertility, and new technology increases the missing girls at birth. In China and India, sex ratios at birth point to a heavily skewed pattern in favor of boys. Where parents continue to favor sons over daughters, a gender bias in sex-selective abortions, female infanticide, and neglect is believed to account for millions of missing girls at birth. In 2008 alone, an estimated 1 million girls in China and 250,000 girls in India were missing at birth. The abuse of new technologies for sex-selective abortions—such as cheap mobile ultrasound
clinics—accounted for much of this shortfall, despite laws against such practices in many nations, such as India and China. Economic prosperity will continue to increase amniocentesis and ultrasound services throughout the developing world, possibly enabling the diffusion of sex-selective abortions where son-preferences exist. ... This does not imply that change is impossible: The Republic of Korea’s male-female sex ratio under age five was once the highest in Asia, but it peaked in the mid-1990s and then
reversed—a link to societal shifts in normative values stemming from industrialization and urbanization."
A second main cause: Maternal Mortality
"The female disadvantage in mortality during the reproductive ages is in part driven by the risk of death in pregnancy and childbirth and associated long-term disabilities. Although maternal mortality ratios have fallen by 34 percent since 1990, they remain high in many parts of the world: Sub-Saharan Africa had the highest ratio in 2008 at 640 maternal deaths per 100,000 live births, followed by South Asia (280), Oceania (230), and Southeast Asia (160). Bangladesh, Cambodia, India, and Indonesia have maternal mortality ratios comparable to Sweden’s around 1900, and Afghanistan’s is similar to Sweden’s in the 17th century. ... Driving the high maternal mortality rates in many countries are poor obstetric health services and high fertility rates. Income growth and changes in household behavior alone appear insufficient to reduce maternal mortality; public investments are key to improving maternal health care services."