I've been trying to wrap my mind around the issues and possibilities created by the new technologies for extracting oil and gas from North America. Amy Myers Jaffe, an energy expert who runs the Baker Institute Energy Forum at Rice University, has a nice provocative short article in the most recent issue of Foreign Policy magazine called  "The Americas, Not the Middle East, Will Be the World Capital of Energy." Jaffe writes:


"By the 2020s, the capital of energy will likely have shifted back to the Western Hemisphere, where it was prior to the ascendancy of Middle Eastern megasuppliers such as Saudi Arabia and Kuwait in the 1960s. The reasons for this shift are partly technological and partly political. Geologists have long known that the Americas are home to plentiful hydrocarbons trapped in hard-to-reach offshore deposits, on-land shale rock, oil sands, and heavy oil formations. The U.S. endowment of unconventional oil is more than 2 trillion barrels, with another 2.4 trillion in Canada and 2 trillion-plus in South America -- compared with conventional Middle Eastern and North African oil resources of 1.2 trillion. The problem was always how to unlock them economically.

But since the early 2000s, the energy industry has largely solved that problem. With the help of horizontal drilling and other innovations, shale gas production in the United States has skyrocketed from virtually nothing to 15 to 20 percent of the U.S. natural gas supply in less than a decade. By 2040, it could account for more than half of it. ... Meanwhile, onshore oil production in the United States, condemned to predictions of inexorable decline by analysts for two decades, is about to stage an unexpected comeback."

Jaffe's article sent me back to the sober-sided Annual Energy Outlook 2011 published in April by the U.S. Energy Information Administration. Here's a figure showing how the new "enhanced-oil recovery" techniques are expected to raise oil production in the lower 48 states in a way that offsets declining production from Alaska. The report says: "Rising world oil prices, growing shale oil resources (i.e., liquid oil embedded in non-porous shale rock), and increased production using EOR [enhanced oil-recovery] techniques contribute to increased domestic crude oil production from 2009 to 2035 in the AEO2011 Reference case (Figure 95). The Bakken shale oil formation contributes to growth in crude oil production in the Rocky Mountain Region, and growth in the Gulf Coast region is spurred by the resources in the Eagle Ford and Austin Chalk formations. Some of the decline in oil production in the Southwest region is offset by production coming from the Avalon shale formation." 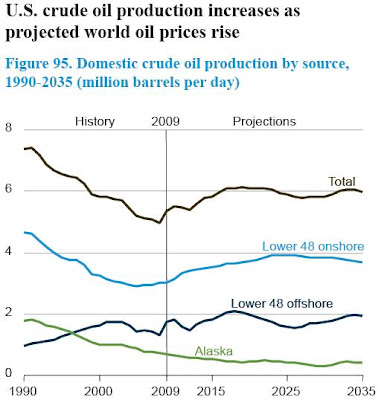 And here's a figure showing that the share of U.S. oil consumption that is imported peaked in 2005, and is expected to fall over the next couple of decades. The report says: "[W]hile consumption of liquid fuels increases steadily in the Reference case from 2009 to 2035, the growth in demand is met by domestic production.The net import share of U.S. liquid fuels consumption fell from 60 percent in 2005 to 52 percent in 2009. The net import share continues to decline in the Reference case, to 42 percent in 2035 ..." 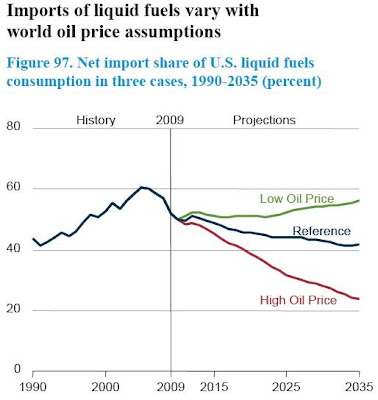 Of course, there are potential environmental issues. There are issues about what kinds of risks are posed by these technologies for extracting oil, as well as about the conventional pollutants and carbon dioxide emitted by burning these fossil fuels. But for the next few decades, substantial quantities of fossil fuels will continue to be used. The carbon dioxide produced will be essentially the same regardless of where these fossil fuels are produced. Thus, if the local environmental issues can be worked out--that is, the issues about extracting these resources and about conventional pollutants--then there is no inconsistency in moving toward fossil fuels produced and refined by U.S. workers, rather than imported fossil fuels produced and refined by foreign workers, as we continue to seek ways of reducing global carbon emissions.