Jeffrey Frankel has a readable overview of the arguments over "The Curse: Why Natural Resources are Not Always a Good Thing," in the Fourth Quarter 2011 issue of the Milken Institute Review, available (with free registration) here.  Frankel writes:

"It is striking how often countries that are rich with oil, minerals or fertile land have failed to grow more rapidly than those without. Angola, Nigeria and Sudan are all awash in petroleum, yet most of their citizens are
bitterly poor. Meanwhile, East Asian economies, including Japan, Korea, Taiwan, Singapore and Hong Kong, have achieved Western-level standards of living despite being rocky islands (or peninsulas) with virtually no exportable natural resources. This is the phenomenon known to economists as the “natural resources curse.” The evidence for its existence is more than anecdotal. The curse shows up in econometric tests of the determinants of economic performance across a comprehensive sample of countries.
Consider the figure on page 31, which plots the relationship between nonagricultural resource exports as a portion of total goods exports and average economic growth rates over the past four decades. The usual
suspects – China, Korea, Thailand – are conspicuously high in growth and low in natural resources. Likewise, resource-rich Liberia, Venezuela and Zambia have little to show for their wealth in terms of economic development. The negative correlation is not very strong because some countries – think Chile and Saudi Arabia – have managed to have it both ways. But the data certainly suggest no positive correlation between natural resource wealth and economic growth." 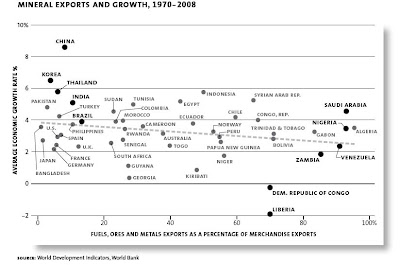 Frankel offers a wide array of examples and evidence on the natural resources curse. Along the way, he reviews the possible reasons why natural resources might hinder economic growth: 1) Commodity prices fluctuate a lot, so an economy that depends on commodity exports will be hit by a series of shocks; 2) An economy focused on natural resources diverts land, labor, and capital from other sectors of the economy, like manufacturing; 3) Natural resource endowments can foster corruption and weak institutions, as different groups jostle for control of the income from the resources; 4) High exports of natural resources can lead to currency appreciation which then disadvantages all other exports; and 5) Natural resources can be depleted.

He also discusses policies that countries can use to reduce the risk of these pitfalls.

• Hedge export proceeds on derivatives markets (in particular, options markets), as Mexico has done with oil. That way, exporting countries can plan government budgets around firm expectations of revenues and, as important, dampen shocks caused by unanticipated  changes in price.

• Adopt Chilean-style fiscal rules, which prescribe a structural budget surplus and use independent panels of experts to determine what future price of the export commodity – in Chile’s case, copper – should be assumed in forecasting the structural budget. Thus, when the independent experts determine that copper prices have fallen below long-term expectations, the government is authorized to offset the impact with temporary fiscal stimulus. But when copper prices are above the long term trend, and the bonanza is determined to be entirely temporary, the government must save the proceeds.

• Intervene in foreign exchange markets to dampen upward pressure on an exporter’s currency in the early stages of commodity booms, while seeking to prevent the money supply from swelling. Subsequently, allow gradual appreciation when the commodity boom has proved to be long-lived or when domestic inflation is no longer contained.

• Establish transparent sovereign wealth funds with the proceeds of commodity exports in order to assure that future generations share the bounty. Botswana’s Pula Fund, built on earnings from the sale of diamonds, is a good model. The fund, invested entirely in securities denominated in other currencies, serves both as a sinking fund to offset the depletion of diamonds and as a buffer to smooth economic fluctuations.

• Make lump-sum per capita distributions of revenues from mineral exports in order to make sure the money doesn’t end up in the bank accounts of corrupt officials.