Back in the mid-1980s, when the world was young and I was just leaving economics graduate school, I wrote editorials on economic and environmental issues for the San Jose Mercury News for a couple of years. (At that time, the paper was booming, because in those pre-Internet times, it carried much the help-wanted advertising for Silicon Valley.) In 1981, Congress had passed a tax credit for research and development, but it has been passed on a temporary basis. Remarkably enough, in 2011 the
the R&D tax credit still languishing in temporary status, expiring every few years and then being re-authorized, currently set to expire at the end of 2011.

The theoretical case for government support of R&D is unchanged over time: new technology provides social benefits that often greatly exceed the private benefits received by the inventor, and so society can in theory be better off by subsidizing such activity. However, two things have changed  since I was writing editorials advocating a permanent R&D tax credit back in the mid-1980s. There is now a body of research strongly suggesting that the tax credit is cost-effective at increasing research and development. And much of the rest of the world, agreeing with this research, now offers more aggressive support for industry R&D than does the United States.


The R&D Credit Coalition hired Ernst and Young to write a report on the evidence. Unsurprisingly, both given the parade of evidence over the years and the source of the funding (!), the report is called: "The R&D Credit: An effective policy for promoting research spending."  Their overall conclusion is that an R&D tax credit could increase industry R&D spending by 10-20% over the long run, depending on design. Clearly, this isn't a revolutionary change--just a sensible step to take. Here's a useful figure summarizing the results of studies of how an R&D tax credit affects R&D spending. 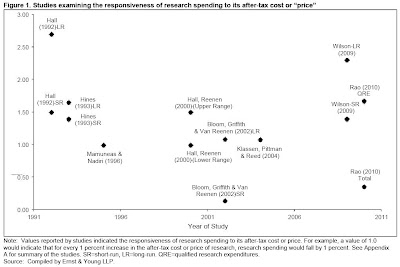 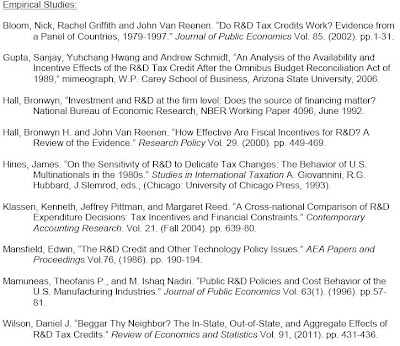 While U.S. policy on an R&D tax credit has been running in place for 30 years, many other countries have embraced such a policy. For example, here is an OECD report from 2008 on the spread of such incentives:  "Recent years have seen a shift from direct public funding of business R&D towards indirect funding (Figure 3). In 2005, direct government funds financed on average 7% of business
R&D, down from 11% in 1995. In 2008, 21 OECD countries offered tax relief for business R&D, up from 12 in 1995, and most have tended to make it more generous over the years. The growing use of R&D tax credits is partly driven by countries’ efforts to enhance their attractiveness for R&D-related foreign direct investment."

Here is the Figure 3 referred to in the quotation. Cross-country comparisons of tax policy can be hazardous, because the conclusions can depend on just how certain provisions are classified. Nonetheless, it's striking that the U.S. ranks 24th in its tax support for industry R&D of the countries in the figure. 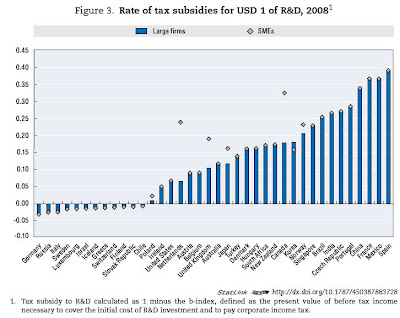