Who is Using $1 Trillion in U.S. Currency?

Jeremy Gerst and Daniel J. Wilson of the Federal Reserve Bank of San Francisco have a short essay:
"What's in Your Wallet? The Future of Cash." They offer evidence for the intriguing fact that in an economy with increasing use of credit cards, debit card and electronic transfers, the amount of cash outstanding has kept growing. But they don't tackle what to me is the most intriguing question in this area: Who is holding all this currency?

Facts first. As Gerst and Wilson write: "Over the past few decades, the dominant position of cash as a store of value and a means of payment has increasingly been challenged. The growth of electronic payments, especially credit cards and, more recently, debit cards, has radically changed the role of cash in the global economy. Yet, the circulation of the U.S. dollar, the world’s most widely used currency, has continued to grow without interruption. Last year, the value of U.S. currency in circulation reached nearly $1 trillion dollars." 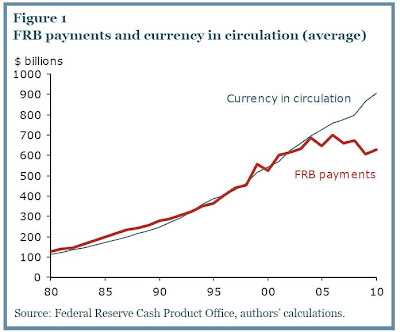 Gerst and Wilson offer some estimates and simulations about trends in cash payments and demand for cash in the future. But to me, the more interesting question is who is holding all that cash. In my Principles of Economics textbook, available from Textbook Media (and of course I encourage all those teaching an introductory economics course to check it out), I included a discussion box on this question in Chapter 29 on "Money and Banking." The cash total cited here is from a few years ago, but the basic message remains. I'll quote from the textbook here:


The Case of the Missing Currency

Here is a puzzle. The Federal Reserve reported that about $800 billion in currency—that is, paper money and coins—was in circulation in 2006. Dividing the total currency by roughly 210 million U.S. adults over the age of 18 works out to an average of approximately $3,800 in currency for every man and woman.

This average seems ridiculously high. Survey results suggest that the average holdings of currency for each adult are more like $350—and that number takes into account well-off people who hold large amounts of cash in safes and safety deposit boxes. If 210 million adults are each holding $350, then total holdings of U.S. currency by individuals is about $73 billion. Businesses traditionally hold about 3% of all currency, or about $24 billion. After all, most businesses try not to hold currency, but instead quickly get money to the bank where it can earn some interest.

So if households and firms together hold about $97 billion in currency, where is the other $703 billion? No one is quite sure. There are three possible answers: it may be held by children; as part of the unmeasured “underground” economy; or by foreigners. Even if one believes that teenage buying power is important to certain sectors of the economy, and that underground, unreported businesses are everywhere, it is very hard to believe that these two components are larger than the uses of money by adults and legal businesses. As a result, it seems likely that hundreds of billions of dollars of U.S. currency is circulating in the hands
of foreigners. When a country’s own currency is plagued with uncertainty, perhaps because of a high inflation rate, people in that country may start carrying out transactions and saving money by using U.S. dollars.

But this explanation is not completely satisfactory either. In high-income economies like those of the European nations, Japan, and Canada, people have relatively little need to use U.S. currency for transactions or saving. People may invest in the United States, but they can do so with electronic money; they don’t need actual currency in the form of paper and coins. In the middle and low-income countries of the world, the average
families are too poor to account for hundreds of billions of dollars of U.S. currency.

The case of the missing currency remains unsolved.

I would be remiss if I didn't add that I first learned about "The Case of the Missing Currency" from an article by Case Sprenkle in the Fall 1993 issue of my own Journal of Economic Perspectives. The journal is freely available from the most recent issue back to around 1998, but this is a little too far back to be freely available online. However, it's readily available if you search the web, as well as on JSTOR.