The usual ways of reducing a government debt burden over time are fairly well-known: cut spending or raise taxes; have the economy grow faster than the debt burden, so the ratio of debt/GDP declines over time; a burst of inflation, which reduces the real value of past debt; and in some cases an outright default or restructuring of the debt. To this list, Carmen Reinhart, Jacob F. Kirkegaard, and M. Belen Sbrancia offer "Financial Repression Redux."Here are some main themes (references omitted for readability):
Here's their definition of financial repression:
"Financial repression occurs when governments implement policies to channel to themselves funds that in a deregulated market environment would go elsewhere. Policies include directed lending to the government by captive domestic audiences (such as pension funds or domestic banks), explicit or implicit caps on interest rates, regulation of cross-border capital movements, and (generally) a tighter connection between government and banks, either explicitly through public ownership of some of the banks or through heavy “moral suasion.” Financial repression is also sometimes associated with relatively high reserve requirements (or liquidity requirements), securities transaction taxes, prohibition of gold purchases, or the placement of significant amounts of government debt that is nonmarketable.... "


How is financial repression currently operating in the U.S.?
One potential example of how financial repression is operating in the U.S. is the super-low interest rates. In part, of course, these are an attempt to stimulate the economy, but it also seems plausible to me that they are intended to help the U.S. government in financing its debt. But a more straightforward example is that when the Federal Reserve and other central banks buy U.S. Treasury debt directly--debt that might very well need to pay a higher interest rate if it was sold to outsiders. Back in 1990, outsiders owned about 75% of U.S. Treasury debt; now they own about half. 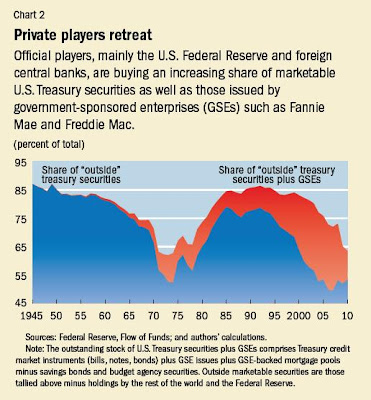 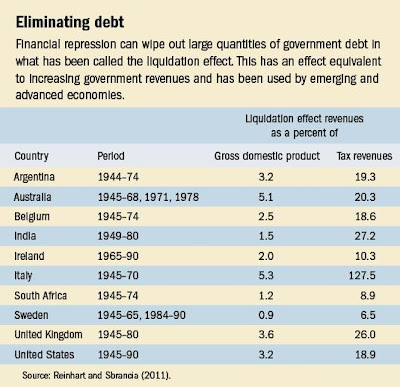 My point here isn't to argue for or against what they call financial repression. But if their calculations are roughly right, it's an option for reducing government debt that could end up playing a major role, and needs to be better understood.