The most recent World Development Report from the World Bank is centered on the theme: "Gender Equality and  Development." The first chapter of the report focuses on gains that have been made; the second chapter focuses on dimensions of inequality that persist. In this post, I'll focus on two patterns from the first chapter that I had not known about--on average, women the world around seem to have near-parity, and in some cases better than parity, with men in education and in health care. In a later post, I'll focus on what seems to me the most appalling widespread gender inequality that remains in the world today.

"The patterns are similar in secondary education, with one notable difference. In roughly one-third of developing countries (45), girls outnumbered boys in secondary education in 2008 (see figure 1.1). Although the female gender gap tends to be higher in poorer countries, boys were in the minority in a wide range of nations including Bangladesh, Brazil, Honduras, Lesotho, Malaysia, Mongolia, and South Africa.

Tertiary enrollment growth is stronger for women than for men across the world. The number of male tertiary students globally more than quadrupled, from 17.7 million to 77.8 million between 1970 and 2008, but the number of female tertiary students rose more than sevenfold, from 10.8 million to 80.9 million, overtaking men. Female tertiary enrollment rates in 2008 lagged behind in only 36 developing countries of 96 with data (see figure 1.1). ... 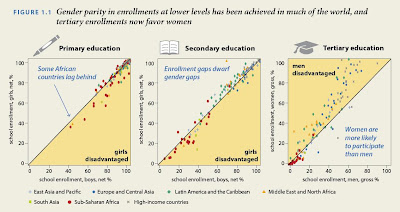 "Although boys are more likely than girls to be enrolled in primary school, girls make better progress—lower repetition and lower dropout rates—than boys in all developing regions. ...  Gender now explains very little of the remaining inequality in school enrollment ...  In a large number of countries, a decomposition of school enrollments suggests that wealth is the constraining factor for most, and in only a very limited number will a narrow focus on gender (rather than poverty) reduce inequalities further ..."

In most developing countries, fertility rates fell sharply in a fairly short period. These declines were much faster than earlier declines in today’s rich countries. In the United States, fertility rates fell gradually in the 1800s through 1940, increased during the baby boom, and then leveled off at just above replacement. In
India, fertility was high and stable through 1960 and then sharply declined from 6 births per woman to 2.3 by 2009. What took the United States more than 100 years took India 40 (figure 1.4). Similarly, in Morocco, the fertility rate fell from 4 children per woman to 2.5 between 1992 and 2004." 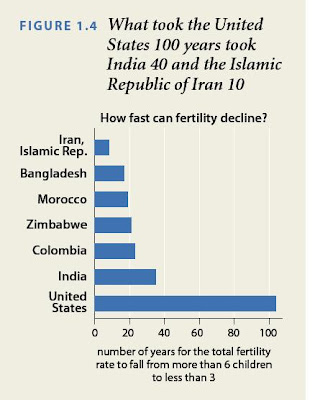 "On various other aspects of health status and health care, differences by sex are small. In many low-income countries, the proportion of children stunted, wasted, or underweight remains high, but girls are no worse off than boys. In fact, data from the Demographic and Health Surveys show that boys are at a slight disadvantage. ...  Similarly, there is little evidence of systematic gender discrimination in the use of health services or in health spending. Out-of-pocket spending on health in the 1990s was higher for women than for men in Brazil, the Dominican Republic, Paraguay, and Peru. Evidence from South Africa reveals the same pro-female pattern, as does that for lower income countries. ... Evidence from India, Indonesia, and Kenya tells a similar story. ... For preventive health services such as vaccination, poverty rather than gender appears to be the major constraining factor ..."