The U.S. International Trade Commission has published the 7th edition of its occasional report: "The Economic Effects of Significant U.S. Import Restraints." The report comes in two main parts. The first part, discussed in an earlier post here, is an overview and status report on the main U.S. barriers. The second part concerns the trend toward longer global supply chains. Here are some highlights (with footnotes and citations expunged for readability throughout):

Description and illustration of a basic global supply chain

"For example, a domestic firm might provide the R&D and design of a product, and produce the initial intermediate inputs using local raw materials, as in figure 3.1. Then these intermediate inputs would be exported to a second country, where a firm would use them to produce a semifinished product. That firm would then export the semifinished good to a third country, where the final good is
assembled and packaged. The third country would then export the good back to the domestic firm, which would oversee the marketing, retailing, and delivery of the product domestically and abroad. Supply chains like these require extensive organizational oversight. They also typically involve heavy reliance on telecommunications to ensure that different stages of the product are made to specification and on logistics to coordinate the movement of material across many firms and countries. As the case
studies later in this chapter illustrate, global supply chains can involve complex interconnections between different tasks, as well as between domestic and foreign firms carrying out those tasks. This complexity is managed by lead firms in the chain that oversee production and make other key decisions ... 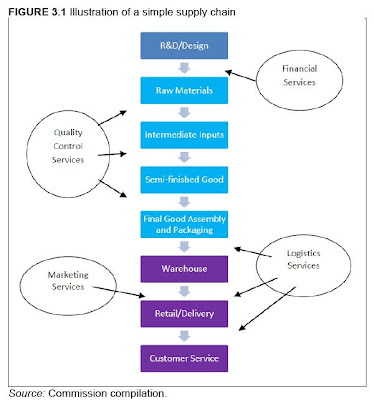 What factors are driving longer global supply chains?
A key force behind the widespread development of global supply chains has been
technological change. Over time, technological change has allowed more production
processes to be fragmented—split into stages or tasks—and those stages or tasks to be
carried out in new, often distant locations. For example, in the 1970s some apparel
production for the U.S. market was offshored in nearby countries in the Caribbean region.
But advances in telecommunications and in transport have allowed the industry to source
from distant Asian suppliers and still meet the time-sensitive demands of the industry. ...
Two other important drivers in the development of global chains are the extensive global
trade liberalization (e.g., reduction in tariff and nontariff barriers) and falling
transportation costs that have occurred in the past quarter-century. Because goods and
services produced by global supply chains typically cross borders multiple times, they
pass through multiple customs regimes and are affected by multiple tariffs and nontariff
barriers. Thus, the benefits of trade liberalization can also be multiplied for goods and
services produced in global supply chains."

Expansion of the processing trade

"Numerous countries have set up programs to encourage processing trade, which allow duty-free imports of components used in products made solely for export. Using data on these programs provides a more direct measure of global supply chain trade, since all of the trade in the components and products affected by the programs moves through a supply chain. China and Mexico are the two largest users of export processing regimes in the developing world, and together account for about 80–85 percent of such exports worldwide. Chinese trade grew by more than 800 percent between 1995 and 2008—and about half of this growth is attributable to Chinese processing trade. Mexico is also heavily reliant on processing trade; processing imports represented over 50 percent of total Mexican imports in 2006."

A Cautionary Story for the U.S. in Global Supply Chains: Flat-Panel Display Televisions


There are two key components for FPD [flat-panel display] televisions, the display panel and the chipset, which together account for 94 percent of the costs. The global supply chain for FPD televisions uses glass produced in Japan and Korea; displays incorporating the glass, assembled in Japan, Korea, and Taiwan; and semiconductor chip sets designed in the United States and elsewhere and produced in China, Korea, Singapore, and Taiwan. Assembly occurs principally in China, the world’s largest television producer, although most sets destined for the U.S. market are assembled in Mexico. ... U.S. participation in the global supply chain is now limited to the design of chips, some
product development, distribution, marketing, and customer service. The last U.S. television factory (owned by Sony) closed in 2009. All televisions sold in the United States now are imported from original equipment manufacturers (OEMs) with factories outside the United States (principally in Mexico) or from contract manufacturers with factories principally in Mexico and China. The sole remaining U.S.-headquartered television brand, Vizio, entered the U.S. market in 2002. Vizio has no factories of its own, but rather uses contract manufacturers in China, Taiwan, and Mexico to produce goods to Vizio’s specifications. Although Vizio builds products that incorporate current technology, it does no R&D; instead, it purchases patents or licenses the technology from other patent owners. Vizio has also acquired other patents, which it licenses to other television manufacturers. The principal suppliers of finished televisions to Vizio are two contract manufacturers in Taiwan, Foxconn and Amtran. These companies are also part owners of Vizio."

U.S. firms are among the leading logistics providers worldwide and hence have become essential participants in global supply chains. Logistics, the coordinated movement of goods and services, encompasses diverse activities that oversee the end-to-end transport of raw, intermediate, and final goods between suppliers, producers, and consumers.... The largest and most diversified U.S. logistics firms are FedEx and UPS, although for both firms, primary revenues are derived from the express delivery of letters and small packages. Some other large U.S.-based logistics firms include C.H. Robinson Worldwide, Expeditors International of Washington, Caterpillar Logistics Services, and Penske Logistics. All of these firms operate globally and typically have hundreds of offices worldwide. Like FedEx and UPS, these firms have added logistics and supply chain capabilities to their main lines of business which, for example, include the transportation of heavy freight (Caterpillar) and the arrangement of transportation services (C.H. Robinson and Expeditors). For all firms, supply chain management is a fast-growing business segment, with U.S. revenues for supply chain services having grown by about 20 percent during 2004–09.

Shifting to a value-added view of trade

When products cross national borders several times, then instead of focusing on the value of what crosses the border, which is "gross trade," it becomes important to understand "value-added" trade--that is,what value-added occurred within your country. One approach here is to look at the foreign content in your production. The green line shows that foreign content in U.S. manufacturing has risen from about 10% in the mid-1980s to more than 25% now. Overall foreign content in U.S. exports has risen, but more slowly, from about 8% in the late 1970s to as high as 15% before the recession hit full force in 2008. 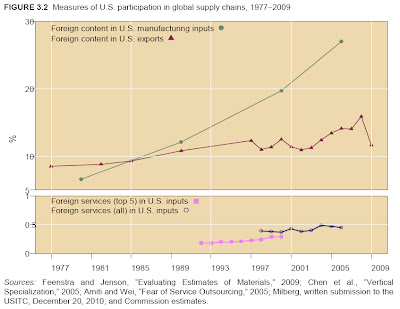 Looking at value-added also affects how one sees bilateral trade patterns. Here's an explanation: "China is the final assembler in a large number of global supply chains, and it uses components from many other countries to produce its exports. The figure below shows that the U.S.-China trade deficit on a value-added basis is considerably smaller (by about 40 percent in 2004) than on the commonly reported basis of official gross trade.b By contrast, Japan exports parts and components to countries throughout Asia; many of these components are eventually assembled into final products and exported to the United States. Thus the U.S.-Japan trade balance on a value-added basis is larger than the comparable gross trade deficit. The U.S. value-added tradedeficits with other major trading partners (Canada, Mexico, and the EU-15) differ by smaller amountsfrom their corresponding gross trade deficits." 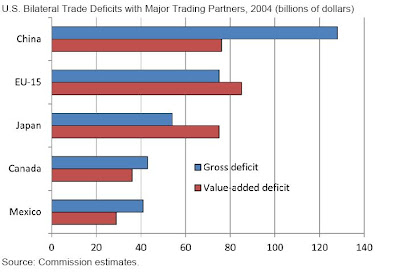 Other ways in which longer global supply chains change thinking about international trade
Here are some other changes: "Modern complex supply chains generate more trade than traditional supply networks in which only raw materials or final goods might be sent across international borders. In the earlier example of a supply chain in which the stages in figure 3.1 were carried out in three countries, the product was exported three times before being sold in final form at home or abroad. Global chains can also generate new patterns of specialization, as firms in a particular country often specialize in a particular stage or task. In electronics, for example, intermediate and semifinished goods are often produced in Japan, Hong Kong, South Korea, and Taiwan, while final assembly activities are often contracted to Chinese firms. Finally, global chains can change the nature of a nation’s trade. As countries become more vertically specialized, their imports and exports are increasingly composed of intermediate goods and services that are moving to the next stage in the chain."

1) It will be interesting to see if the growth of global supply chains alters the political economy of trade. In the old view of trade, firms within a certain country made goods like cars or machine tools or computers. That doesn't happen so much any more; instead, firms within a country do pieces and parts of the production process. As manufacturers of cars and computers and other goods become less national in scope, will there be less political pressure to protect them from international trade? Or will being more economically intertwined make trade seem like a more frightening and salient issue?

2) The U.S. economy has some large advantages in a world of longer global supply chains: the sheer size of its existing markets; its functional rules of law and finance; its expertise in logistics and marketing; its well-developed communication and transportation facilities; the cultural and personal connections that American has throughout the world economy; its R&D and scientific capabilities; and the flexibility of its workers and firms. There are a lot of clouds in the future economic outlook for the U.S., but one potential bright spot--if we go out and seize it--is the multiplicity of roles that the U.S. can play in the longer supply chains of an evolving global economy.

For more on this subject, and in particular some measures of how foreign content in exports has evolved over recent decades, see my post from August 19 is about an IMF report on Longer Global Supply Chains.