When I chat with people about China's economic growth, I often hear a story that goes like this: The main driver's behind China's growth is that it uses a combination of cheap labor and an undervalued exchange rate to create huge trade surpluses. The most recent issue of my own Journal of Economic Perspectives includes a five-paper symposium on China's growth, and they make a compelling case that this received wisdom about China's growth is more wrong than right.

For example, start with the claim that China's economic growth has been driven by huge trade surpluses. China's major economic reforms started around 1978, and rapid growth took off not long after that. But China's balance of trade was essentially in balance until the early 2000s, and only then did it take off. Here's a figure generated using the ever-useful FRED website from the St. Louis Fed. 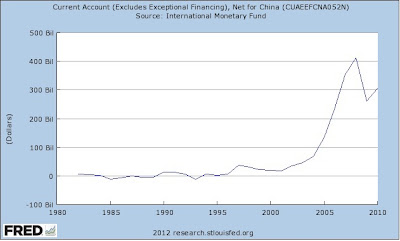 How does China's pattern of trade balances line up with argument about China's undervalued exchange rate? Here's a graph showing China's exchange rate over time in yuan/dollar. Thus, an upward movement on the graph means that yuan is weaker relative to the dollar, and a downward movement means that it is stronger relative to the dollar. The yuan does indeed get weaker relative to the U.S. dollar for much of the 1980s and first half of the 1990s--but this is the time period when China's trade balance is near-zero. China's exchange rate is pretty much unchanging for the five years or so before China's trade surplus takes off. Since 2006, the yuan has indeed been strengthening. Last week the yuan hit a record high against the dollar since 1994. 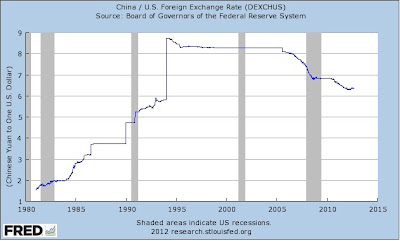 What about China's purportedly cheap wages? Here's a figure from the article by Hongbin Li, Lei Li, Binzhen Wu, and Yanyan Xiong, called "The End of Cheap Chinese Labor." As the figure points out, China's wages were fairly during much of the 1980 and 1990s, which is the time when China's trade was nearly in-balance. But whether the conversion is done using yuan/dollar exchange rates or by inflation in China (measured by the producer price index), wages in China have been rising at double-digit annual rates since the late 1990s. In other words, China's big trade surpluses of the last decade have co-existed with sharply rising wages. 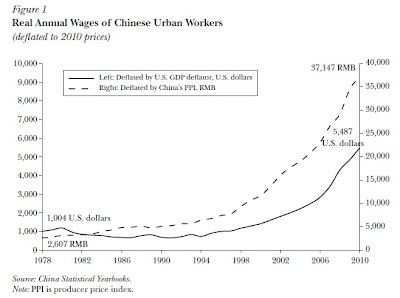 Clearly, China's pattern of economic growth since the start of its reforms needs a different storyline than the basic tale of low wages, a cheap currency, and big trade surpluses. After working with these authors, my own view is that it's useful to think of China's economy since about 1978 in two main stages--although there isn't a clean-and-clear break between them.

The first stage of China's growth that went through the 1980s and a bit into the early 1990s was really about rural areas.  Yasheng Huang makes this argument strongly in his JEP article "How Did China Take Off?" Huang writes: "China’s take-off in economic growth starting in the late 1970s and its poverty reduction for the next couple of decades was completely a function of its rural developments and its internal reforms in general. During the golden era of rural industry in the 1980s, China had none of what are often thought of as the requisite features of the China growth model, like massive state-controlled infrastructural investments and mercantilism." This was the time period when the agricultural sector was allowed to operate under a market framework, and as agricultural output exploded, rural workers moved to employment in the "township and village enterprises." Huang makes a strong argument that these enterprises should be thought of a privately owned firms, operating with what was in many ways a private-sector financial market.


But in the 1990s, the emphasis of China's economy began to change. New leaders favored urban development over rural development, and they cut the township and village enterprises down to size by re-nationalizing their sources of finance They began to reform the money-losing state-owned enterprises that still dominated China's urban economy as of the early 1990s. They moved China toward joining the World Trade Organization, which happened in 2001. For a sense of the transition in China's urban areas to private sector employment, here's another useful figure from Li, Li, Wu and Xiong: 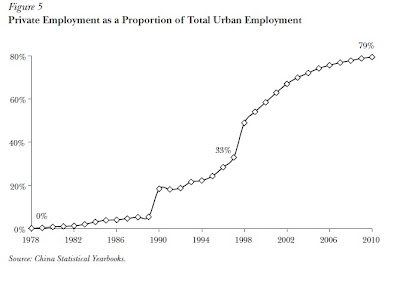 But this process of change brought an unexpected macroeconomic imbalance. As Dennis Tao Yang point out in his JEP paper, "Aggregate Savings and External Imbalances in China," China's 11th Five-Year Plan for the years from 2006-2010 called for trade to be in balance overall--clearly an expectation that was not close to being met. Yang looks at a variety of reasons why savings rates took off in China: for example, after China joined the WTO in 2001, exports took off, but firms lacked useful ways in China's underdeveloped financial system to pass these savings to the household sector; as exports took off, China's government received an unexpectedly huge surplus, with budget surpluses upward of 8% of GDP; and households, concerned about retirement and health costs for themselves and their families, and with little access to loans for mortgages or consumer durables, continued to save at very high rates. Yang notes that in China, this combination of outcomes is sometimes criticized as the "Nation Rich, People Poor" policy.

Thus, although China's economy continues to grow rapidly, it is faced with many challenges. Along with the macroeconomic imbalances emphasized by Yang, Xin Meng raises another cluster of issues in her paper, "Labor Market Outcomes and Reforms in China": the extraordinary back-and-forth migration from rural to urban areas, now at well over 100 million people per year, and perhaps headed much higher; the growing inequalities in wages as labor markets move away from the administratively determined wages that were so common even just 20 years ago; the inequalities being created by the spread of education; and China's coming demographic bulge with many elderly and few young workers--a hangover of the one-child rules to limit population growth.

With little effort, one can compile quite a list of economic difficulties facing China: macroeconomic imbalances, an underdeveloped financial sector, inequalities in wages and across rural and urban areas, the demographic bulge, corruption, environmental problems, and more. Still, with all that said, it's worth remembering that China's economy still has enormous potential upside. China started from such a low per capita GDP back in 1978 that even now, productivity levels are only about 20% of the U.S. level. In yet another JEP paper, "Understanding China’s Growth: Past, Present, and Future," Xiaodong Zhu points out that when Japan and Korea and Taiwan had their rapid spurts of economic growth int he 1950s and 1960s and 1970s, they were essentially raising their productivity levels from 40-50% of the U.S. level up to 70-80% of the U.S. level. In other words, China is still far below the level that was the take-off point of rapid growth for countries like Japan, Korea and Taiwan. As Zhu points out, China is making enormous investments in education, physical capital investment, and research and development. In many ways, it is laying a framework for continued growth.

Surely, many things could go wrong for China's economy. For continued growth, it will need to transform its economy again and again. But it also seems to me that hundreds of millions of people in China have developed a sense of possibility, and of what their economic lives could hold for them. China's future growth is sure to have fits and starts, like every country, but its economy continues ot have enormous momentum toward a much higher standard of living.

Posted by Timothy Taylor at 1:29 PM