The U.S. Census Bureau is out with the monthly trade data for September 2012. The trade deficit is down a bit since August, but not much changed over the last few years. Here's the monthly trade picture of imports and exports over the last couple of years. But what I want to focus on here is the possibility of raising U.S. exports as part of helping to regenerate economic growth.

The U.S. GDP was $14.6 trillion in 2010. By World Bank estimates, with the conversions between currencies done at the purchasing power parity exchange rates, the U.S GDP was essentially equal to the sum of the GDP of China ($10.1 trillion) and (India $4.2 trillion). In the two years since then, the sum of China's and India's economy surely exceeds the U.S. And looking ahead, the annual economic growth rates of China, India, and some other emerging market economies are likely to be a multiple of U.S. growth rates. In much of the last few decades, the U.S. consumer has been driving the world economy with buying and borrowing. But in the next few decades, the emerging economies like China, India, and others will be the drivers of world economic growth.

So how well-prepared is the U.S. economy to find its niche in the global supply chains that are of increasing importance in the world economy? The World Economic Forum offers an answer in "The Global Enabling Trade Report 2012," published last spring. Chapter 1 of the report is called "Reducing Supply Chain Barriers: The Enabling Trade Index 2012," by Robert Z. Lawrence, Sean Doherty, and Margareta Drzeniek Hanouz. They sum up the growing importance of global supply chains in this way:

"Traded commodities are increasingly composed of intermediate products. Reductions in transportation and communication costs and innovations in policies and management have allowed firms to operate global supply chains that benefit from differences in comparative advantage among nations, both through international intra-firm trade and through networks that link teams of producers located in different countries. Trade and foreign investment have become increasingly complementary activities. ... Increasingly, countries specialize in tasks rather than products. Value is now added in many countries before particular goods and services reach their final destination, and the traditional notion of trade as production in one country and consumption in another is
increasingly inaccurate."


Their "enabling trade" index ranks countries in how their institutions and infrastructure support global trade, along a number of categories. Here's the list of the top 25 countries in their ranking: the U.S. economy ranked 19th in 2010, and dropped to 23rd in the 2012 rankings. 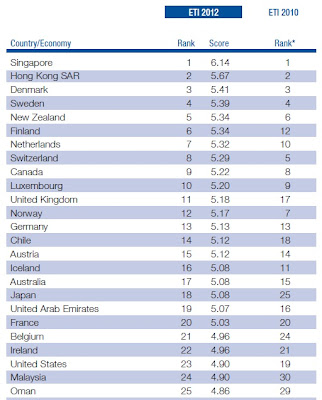 I'm not especially bothered that the U.S. ranks behind national economies that are massively oriented to international trade, like Singapore and Hong Kong. But ranking behind other large high-income economies like Sweden, Canada, Germany, Japan and France is more troubling. Remember, countries that enable trade are the ones that will be prepared to participate in the main sources of future global economic growth. Here's how Lawrence, Doherty, and Hanouz sum up the U.S. situation.

"Dropping four places, the United States continues its downward trend since the last edition and is ranked 23rd this year. The country’s performance has fallen in international comparison in almost all areas assessed by the Index, bar the efficiency of its border procedures and the availability of logistics services. The regulatory environment appears less conducive to business than in previous years, falling by 10 ranks from 22nd to 32nd. Concerns regarding the protection of property rights, undue influence on government and judicial decisions, and corruption are on the rise. And as in previous years, protection from the threat of terrorism burdens the business sector with very high cost (112th), and US exporters face some of the highest trade barriers abroad. Yet overall the United States continues to benefit from hassle-free import and export procedures (17th) and efficient customs clearance (14th), thanks to excellent customs services to business (3rd). The country also boasts excellent infrastructure, including ICTs, providing a strong basis for enabling trade within the country."


The U.S. economy, with its enormous domestic market, has traditionally not had to treat exports and foreign trade as essential to its own growth. But the global economy is changing, and more U.S. producers need to start looking longer and harder beyond their national borders.
Posted by Timothy Taylor at 6:00 AM