I'm not sure why it's happening or what it means, but some OECD reports are showing that international investment flows are slowing down in late 2012, whether one looks at international merger and acquisition activity or at flows of foreign direct investment.

For example, the OECD Investment News for September 2012, written by Michael Gestrin, is titled "Global investment dries up in 2012." The main focus of the report is on international merger and acquisition activity, and Gestrin writes:

"After two years of steady gains, international investment is again falling sharply. After breaking $1 trillion in 2011, international mergers and acquisitions (IM&A) are projected to reach $675 billion in 2012, a 34% decline from 2011(figure 1) ... At the same time as IM&A has been declining, firms have also been increasingly divesting themselves of international assets. As a result, net IM&A (the difference between IM&A and international divestment) has dropped to $317 billion, its lowest level since 2004 ..."

"IM&A has declined more sharply than overall M&A activity. This is reflected in the projected drop in the share of IM&A in total M&A from 35% in 2011 to 29% in 2012 (figure 2). IM&A is declining three times faster than domestic M&A, suggesting that concerns and uncertainties specific to the international investment climate are behind the recent slide in IM&A, rather than IM&A simply following a broader downward trend."


The main exception to these downward trends seems to be a continuing rise in state-owned enterprises, particularly from China, carrying out more mergers and acquisitions, especially in transactions aimed at energy and mining operations in the Middle East and Africa. Here's one figure showing the drop in international investment, and another showing the drop as a share of total M&A activity. 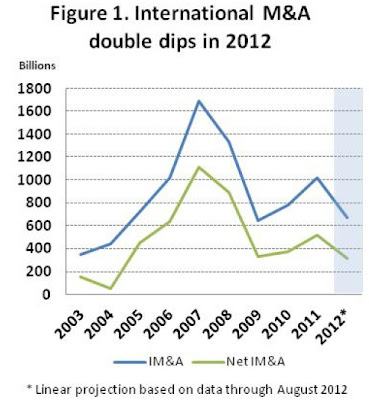 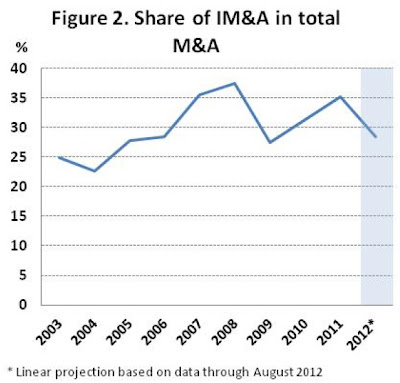 In the October 2012 issue of FDI in Figures, a similar pattern emerges for foreign direct investment--which includes merger and acquisition activity. "According to preliminary estimates, global foreign direct investment (FDI) flows continued shrinking in the second quarter of 2012 and declined by -10% from the previous quarter (-14% from a year earlier) to around USD 303 billion, similar to the value of FDI flows recorded in Q2 2010. The stock of global FDI at end-2011 was estimated at USD 20.4 trillion." As with M&A activity, there is something of a bounce-back in FDI between 2010 and 2011--although there is some fluctuation as well--but the first two quarters of 2012 are showing a decline. Here are graphs showing inflows and outflows of FDI for the world as a whole, as well as for the OECD countries, the G-20, and the EU (which are subgroups with overlapping memberships!). 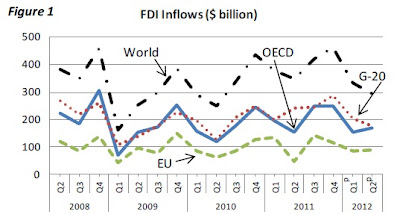 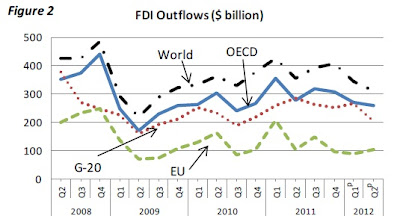 As I said at the start, I'm not sure what to make of these patterns. Perhaps they are just random fluctuation that will sort itself out. But another a plausible interpretation would involve "concerns and uncertainties specific to the international investment climate," as Gestrin put it. Without trying to itemize those concerns here across the euro area, the U.S., China, Russia, India, and elsewhere, we may be seeing a movement toward a situation in which in exporting and importing to other countries, without seeking a management interest in firms in those other countries, is looking relatively more attractive than a few years ago.