Part of the lore of earlier economists as it was passed down to me around the campfire back in the Neolithic era  is the story of how Alban William Housego (Bill) Phillips, the originator of the famous 1956 paper that drew the "Phillips curve" tradeoff between unemployment and inflation, also built a hydraulic economic model: that is, a physical model of the economy in which flows of consumption, saving, investment and other economic forces were represented by liquid moving through tubes and pipes. What I hadn't known until more recently is that Irving Fisher also created an hydraulic model of the economy.


As a starting point for background on Bill Phillips and his famous 1956 Phillips curve paper, I can recommend the article by A.G. Sleeman called  "Retrospectives: The Phillips Curve: A Rushed Job?" which appeared in the Winter 2011 issue of my own Journal of Economic Perspectives. (Like all articles in JEP from the current issue back to the first issue in 1987, it is freely available on-line compliments of the American Economic Association.) The hydraulic computer is not the main focus of Sleeman's article, but he provides evidence that it was a major part of Phillips' career.

Apparently, Phillips completed his undergraduate degree at the London School of Economics in June 1949, specializing in sociology, and receiving only a "Pass." From there, Sleeman writes (footnotes and references omitted:

"In 1950, despite his poor degree, Phillips was appointed an Assistant Lecturer in the Department of Economics at LSE at the top of the pay scale, and simultaneously began his Ph.D. studies. The reason was that by 1949, Phillips had built the MONIAC: Monetary National Income Analogue Computer. (The name is a play on ENIAC, the Electronic Numerical Integrator and Computer, which had been announced in 1946 as the fifi rst general-purpose electronic computer.) MONIAC was a hydraulic machine, made of transparent plastic pipes and tanks fastened to a wooden board, about six feet high, four feet wide, and three feet deep. The MONIAC used colored water to represent the stocks and flows of an IS–LM style model and simulated how the model behaved as monetary and fiscal variables varied. The MONIAC brought Phillips to the attention of James Meade and, ultimately, to Lionel Robbins and other members of the LSE economics department. In 1950, Phillips published a paper on MONIAC in the August issue of Economica eight months after failing his Applied Economics and Economic History exams and passing Principles by a single point. In October 1951, the 36 year-old Phillips was promoted to Lecturer and tenured having published only one paper. Over the next two years Phillips completed his doctorate..."

Phillips was born in New Zealand, and a December 2007 article in Reserve Bank of New Zealand Bulletin discusses the MONIAC. Here's a photo of Phillips standing beside the MONIAC at LSE, and a more recent photo of a MONIAC that the New Zealand central bank received from LSE and has restored to working order. 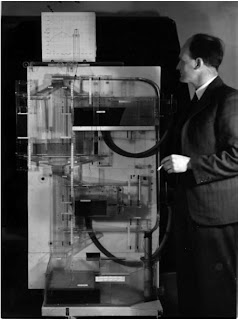 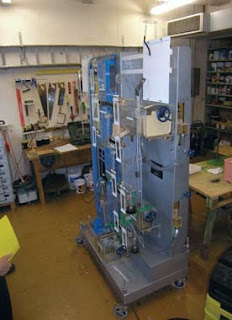 In the New Zealand central bank publication, Tim Ng and Matthew Wright describe the functioning of MONIAC this way: "Separate water tanks represent households, business, government, exporting and importing sectors of the economy. Coloured water pumped around the system measures income, spending and GDP. The system is programmable and capable of solving nine simultaneous equations in response to any change of the parameters, to reach a new equilibrium. A plotter can record
changes in the trade balance, GDP and interest rates on paper. Simulation experiments with fiscal policy, monetary policy and exchange rates can be carried out. Although the MONIAC was conceived as a teaching tool, it is also capable of generating economic forecasts. Phillips himself
used the MONIAC as a teaching tool at the London School of Economics. Around 14 machines were built ..." For those with an insatiable need to know more about the MONIAC, I recommend this special December 2011 issue of Economia Politica: Journal of Analytical and Institutional Economics, which includes about a dozen articles about the lasting influence of Phillips and the MONIAC.


But until recently, I hadn't known about that Irving Fisher had also built a hydraulic model of the economy as part of his doctoral dissertation back in 1891. I learned about it in the article by Robert W. Dimand and Rebeca Gomez Betancourt in the most recent issue of my own JEP. Their article is primarily focused, as the title notes on "Irving Fisher’s Appreciation and Interest (1896) and the Fisher Relation." But in their capsule overview of Fisher's life, they write (citations and footnotes omitted):

"His 1891 doctoral dissertation in mathematics and political economy (Yale’s first Ph.D. in political economy or economics), which was published as Mathematical Investigations in the Theory of Value and Prices (1892), brought general equilibrium analysis to North America; it was supervised jointly by the physicist and engineer J. Willard Gibb and the economist and sociologist William Graham Sumner. Paul Samuelson once described Fisher (1892) as the “greatest doctoral dissertation in economics ever written” ... because Fisher invented general equilibrium analysis for himself before his last minute discovery of the writings of Léon Walras and Francis Ysidro Edgeworth. Fisher’s thesis went beyond these writings in one striking respect: influenced by Gibbs’s work in mechanics, Fisher not only imagined but actually built a hydraulic mechanism to simulate the determination of equilibrium prices and quantities—in effect, a hydraulic computer in the days before electronic computers ..."


Oddly enough, Fisher also wrote a paper that is an early harbinger of the Phillips curve literature. As Dimand and Betancourt write: "In a series of articles, Fisher correlated distributed lags of price
level changes with economic activity and unemployment. His article “A Statistical Relationship between Unemployment and Price Level Changes” (1926 [1973]), little noticed when first published by the International Labour Office, attracted rather more attention when reprinted almost 50 years later in the Journal of Political Economy as “Lost and Found: I Discovered the Phillips Curve—Irving Fisher.”

I'm not aware of any working models of Fisher's hydraulic computer, nor of any photographs of a working model. But  back in 2000, William C. Brainard and Herbert E. Scarf took on the task of investigating how the model worked in "How to Compute Equilibrium Prices in 1891."  They reprint these sketches of Fisher's hydraulic computer from his dissertation. It apparently consisted of a series of cisterns, rods, floats, bellows, and tubes. It represents three consumers and three goods that they consume. 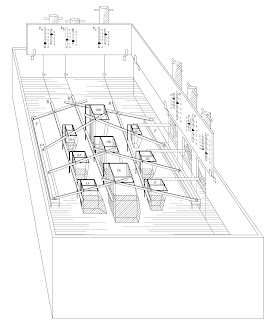 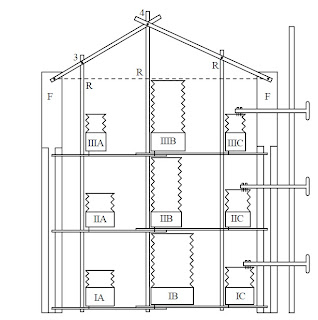 Apparently, Fisher used his hydraulic model of the economy as a teaching tool for 25 years. Brainerd and Scarf write (references omitted):

"Fisher regarded his model as "the physical analog of the ideal economic market," with the virtue that "The elements which contribute to the determination of prices are represented each with its appropriate role and open to the scrutiny of the eye ..." providing a "clear and analytical picture of the interdependence  of the  many elements in the causation of prices ... " Fisher also saw the machine as a way of demonstrating comparative static results, "... to employ the mechanism as an instrument of investigation and by it, study some complicated variations which could scarcely be successfully followed without its aid. ...

"Although we do not know what experiments Fisher actually ran with his machine, he does describe eight comparative static exercises. Some of these illustrate basic features of the system, for example that proportional increases in money incomes result in an equal proportional increase of each price, with no change in the allocation of goods. Another simple exercise discussed by Fisher examines whether proportional increases in the endowment of goods necessarily result in proportional decreases in prices, as was apparently, and incorrectly, believed by Mill. Some exercises illustrate less intuitive properties of exchange economies: increasing one individual's income may make some other individual better off, and also the possibility of `immiserating growth,' i.e. increasing an individuals endowment of a good may actually lower his welfare."

The idea of a hydraulic computer seems anachronistic in these days of electronic computation, but I can imagine that an illustrative teaching tool, watching flows of liquid rebalance might be at least as useful as looking at a professor sketching a supply and demand diagram. In addition, the notion of the economy as a hydraulic set of forces still has considerable rhetorical power. We talk about "liquidity" and "bubbles." The Federal Reserve publishes "Flow of Funds" accounts for the U.S. economy. When economists talk about the financial crisis of 2008 and 2009, they sometime talk in terms of financial "plumbing." For example, here's Darrel Duffie:

"And there has been a lot of progress made, but I do feel that we’re looking at years of work to improve the plumbing, the infrastructure. And what I mean by that are institutional features of how our financial markets work that can’t be adjusted in the short run by discretionary behavior. They’re just there or they’re not. It’s a pipe that exists or it’s a pipe that’s not there. And if those pipes are too small or too fragile and therefore break, the ability of the financial system to serve its function in the macroeconomy ... is broken. If not well designed, the plumbing can get broken in any kind of financial crisis if the shocks are big enough. It doesn’t matter if it’s a subprime mortgage crisis or a eurozone sovereign debt crisis. If you get a big pulse of risk that has to go through the financial system and it can’t make it through one of these pipes or valves without breaking it, then the financial system will no longer function as it’s supposed to and we’ll have recession or possibly worse."

I find myself wondering about what an hydraulic model of an economy would look like if it also included bubbles, runs on financial institutions, credit crunches--along with tubes that could break. Sounds messy, and potentially quite interesting.
Posted by Timothy Taylor at 9:00 AM