In the aftermath of Hurricane Sandy, many teachers and students of economics will find themselves searching for background materials that provide some background in the economics of natural disasters. Here are a few examples from the last few years.

David Stromberg laid out the economic arguments about natural disasters in "Natural Disasters, Economic Development, and Humanitarian Aid," appearing in the Summer 2007 issue of my own Journal of Economic Perspectives. (This article, like all JEP articles back to the start of the journal 1987, is freely available to all courtesy of the American Economic Association.) Stromberg makes the fundamental point that the economic analysis of natural disasters is built on three factors: the incidence of the natural disasters themselves, the number of people exposed to the disaster, and the vulnerability of the population to that disaster. In fact, Stromberg traces this distinction back to letters between Voltaire and Rousseau in the aftermath of the great Lisbon earthquake of 1755. Voltaire had written a poem on how terrible the earthquake was; Rousseau had responded by pointing out that it was not the quake, but the interaction between human society and the quake, which was at issue. Here's Stromberg (footnotes and citations omitted):

"[I]n 1755 an earthquake devastated Lisbon, which was then Europe’s fourth-largest city. At the first quake, fissures five meters wide appeared in the city center. The waves of the subsequent tsunami engulfed the harbor and downtown. Fires raged for days in areas unaffected by the tsunami. An estimated 60,000 people were killed, out of a Lisbon population of 275,000. In a letter to Voltaire dated August 18, 1756, Jean-Jacques Rousseau notes that while the earthquake was an act of nature, previous acts of men, like housing construction and urban residence patterns, set the stage for the high death toll. Rousseau wrote: “Without departing from your subject of Lisbon, admit, for example, that nature did not construct twenty thousand houses of six to seven stories there, and that if the inhabitants of this great city had been more equally spread out and more lightly lodged, the damage would have been much less and perhaps of no account.”

"Following Rousseau’s line of thought, disaster risk analysts distinguish three factors contributing to a disaster: the triggering natural hazard event (such as the earthquake striking in the Atlantic Ocean outside Portugal); the population exposed to the event (such as the 275,000 citizens of Lisbon); and the vulnerability of that population (higher for the people in seven-story buildings)."

Of course, this insight implies that what events are classified as a "natural disaster" is not just about size of the natural event, but about how many people are affected. Thus, the WHO Collaborating Centre for Research on the Epidemiology of Disasters (CRED) maintains an Emergency Events DatabaseCenter that colleges data on natural disasters, where a disaster is defined as 10 or more people reported killed, 100 or more people reported affected, a declaration of a state of emergency, or a call for international assistance. Here are some of their figures showing global trends in natural disasters from 1975 through 2011. The first graph shows the number of such disasters over time: the total was rising into the early 2000s, but has leveled off since then. 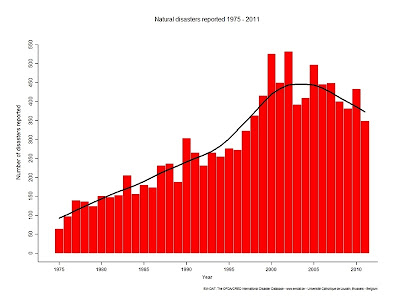 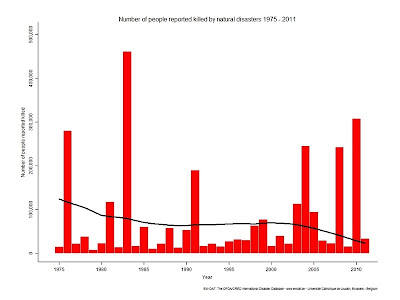 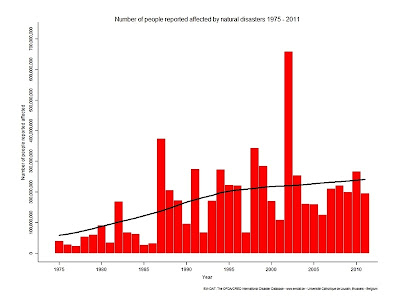 Finally, the fourth graph shows monetary losses from natural disasters. Of course, this graph is driven by whether the disasters hit high-income or middle-income countries, where the measured economic costs of damage are higher than in low-income countries. 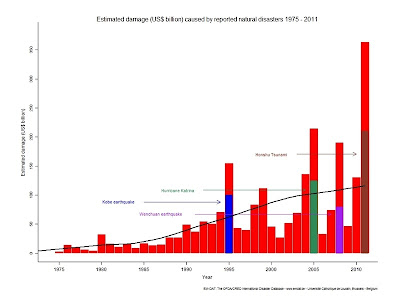 The best way of dealing with natural disasters is often before they occur: early warning systems, advance planning, encouraging natural protections like minimizing deforestation or protecting wetlands, building codes, flood control, and more. For a nice overview of such efforts around the world, I recommend the 2010 report on "Natural Hazards, UnNatural Disasters: The Economics of Effective Prevention," from the World Bank. The report begins: "The adjective “UnNatural” in the title of this report conveys its key message: earthquakes, droughts, floods, and storms are natural hazards, but the unnatural disasters are deaths and damages that result from human acts of omission and commission. Every disaster is unique, but each exposes actions—by individuals and governments at different levels—that, had they been different, would have resulted in fewer deaths and less damage. Prevention is possible, and this report examines what it takes to do this cost-effectively."

The World Bank report is focused more on low-income countries, but similar lessons about prevention apply to high-income countries, as well. In the New York Times on Tuesday, David W. Chen and Mireya Navarro discuss "For Years, Warnings That It Could Happen Here." They talk about proposals that have been floating around the New York metro area for years now about levy systems, storm surge barriers, floodgates in subways,  moving people and economic activity away from low-lying areas, and in general having plans in place. Not many storms will pack the wallop of Hurricane Sandy, but New York City is a huge agglomeration of people living on a coastline who will inevitably be susceptible to storm and flood damage.

Two other quick references: First, the National Flood Insurance Program will almost certainly not have the money to pay for the damage from Hurricane Sandy. For background on that program and how it works, and why its inability to fund these damages was completely predictable, Erwann O.  Michel-Kerjan, lays it out in "Catastrophe Economics: The National Flood Insurance Program," in the Fall 2010 issue of my own Journal of Economic Perspectives.

Second, the aftermath of natural disasters is often a motivation for teachers of economics to discuss the extent to which, even if price restrictions don't make economic sense most of the time, they might be justifiable in the aftermath of a natural disaster to prevent "price-gouging." Michael Giberson of Texas Tech University a nice readable essay on "The Problem with Price Gouging Laws" in the Spring 2011 issue of Regulation magazine. I blogged about the article here. He points out that 31 states have such laws, and that the completely predictable problems with such laws are that they
discourage bringing supplies into disaster areas, they discourage conserving on key resources, they concentrate economic losses on local merchants, and they worsen the economic losses in the disaster area.