The Paperless Office: Headed that Way at Last?

As computers became widespread in the 1980s and into the early 1990s, a common prediction was that we were headed for the "paperless office." But that prediction went badly astray, as Abigail Sellen and Richard Harper pointed out in their 2002 book, The Myth of the Paperless Office.
For example, they cited evidence that consumption of common office paper rose by 14.7% from  1995 and 2000  and they argued that that when organizations started using e-mail, their consumption of paper rose by 40%. In short, it appeared that information technology was not a substitute for the use of paper, but instead was a complement for it--in other words, computerization was going to be the best thing that ever happened to the paper industry.

But although the transition took some time, it now appears that at least U.S. offices are becoming, if not quite paperless, much less paper-intensive. Here's a figure from the Environmental Paper Network's State of the Paper Industry 2011, which came out last year. Notice in particular the decline in paper use since about 2007 in North America and Western Europe. 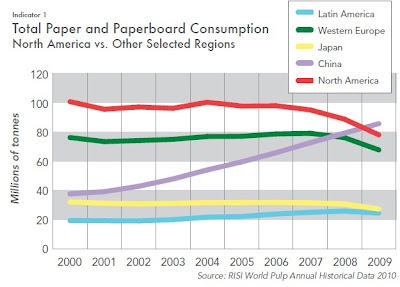 "Consumption of paper and paperboard products has experienced significant decline in North America since 2007. This is attributable primarily to the aftermath of the financial crisis in the United States at the end of the decade. The poor economy motivated many companies to perform a close analysis of their paper use and inspired the adoption of innovative and more efficient systems. These new systems will remain in place into the economic recovery and likely have a lasting impact on printing and writing paper consumption. In addition, the shift in the patterns of consumption of news and other media from print to digital formats is also apparently having an irreversible effect in
some paper sectors such as newsprint.

I remember stories from the old days of computerized offices, maybe 15-20 years ago, about executives who wanted all their e-mails and reports printed out. Those days are gone. But it's interesting to me that even for a change that seems as obvious as electronic communication leading to less paper, it took some years and the pressures of a recession for substantial change to take effect. Similarly, it wasn't until about 2006 that the volume of mail carried by the U.S. Postal Service took a nosedive. All the consequences of major technological changes can take decades to ripple through an economy.