The McKinsey Global Institute has published an intriguing report, "Manufacturing the future: The next era of global growth and innovation." Here's a passage that to me captures much of the overall message, along with many of the controversies about manufacturing.


"As economies mature, manufacturing becomes more important for other attributes, such as its ability to drive productivity growth, innovation, and trade. Manufacturing also plays a critical role in tackling societal challenges, such as reducing energy and resource consumption and limiting greenhouse gas emissions. ...Manufacturing continues to make outsize contributions to research and development, accounting for up to 90 percent of private R&D spending in major manufacturing nations. The sector contributes twice as much to productivity growth as its employment share, and it typically accounts for the largest share of an economy’s foreign trade; across major advanced and developing economies, manufacturing generates 70 percent of exports."

In short, the manufacturing share of GDP and employment tends to follow an inverted-U shape, and the United States and other high-income countries are on the downward side of that inverted U, while China, India, and others are on the upward side of their own inverted U. But as we watch the relative decline in U.S. manufacturing, there is a natural concern that in the process of this economic adaptation, we might be losing an important ingredient in the broader mix of the economy that holds difficult-to-replace importance for productivity, innovation, and even for certain types of employment that emphasizes a range of not-especially-academic skills. 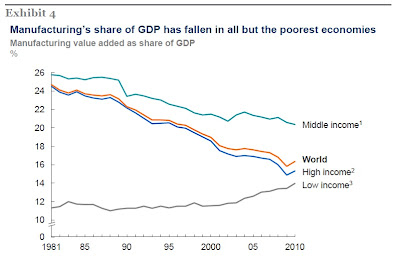 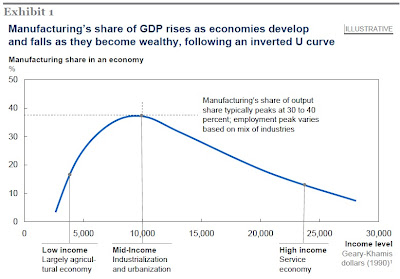 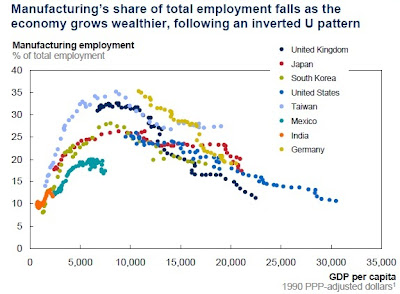 When confronted with this sort of tectonic shift in the economy, one natural reaction is a nostalgic desire to hold on to the way things used to be, but this reaction (almost by definition) is unlikely to help an economy move toward a higher future standard of living. How can we think about this shift away from manufacturing in a more nuanced way?

The McKinsey analysis builds on the idea that manufacturing isn't monolithic. The study divides manufacturing into five categories with different traits. Here's a figure from the report, where the gray circles next to each category report the share of total global manufacturing in that category. 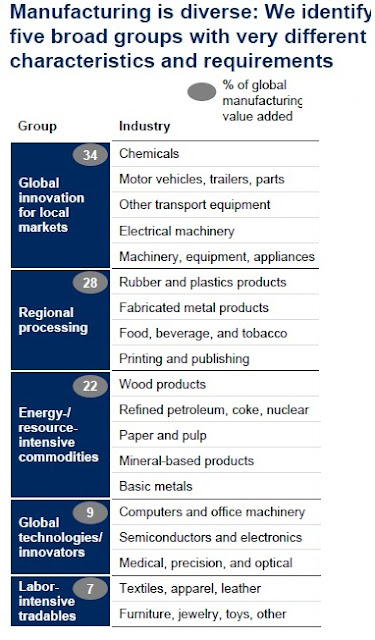 The report emphasizes that the top category--chemicals, automotive, machinery and equipment--
moderately to heavy on research and development and on innovation. Regional processing industries like food processing tend to be highly automated and located near raw materials and demand, but not especially heavy on R&D. The third group of energy and resource-intensive commodities are often linked closely to what's happening energy or commodity prices. Global technology industries such as computers and electronics are heavy on R&D, and tend to involve products that are small in size by quite valuable (think mobile phones), which makes them important in global trade.  The final category of labor-intensive tradables, like apparel, is high tradeable and tends to be produced where labor costs are low. These kinds of insights, spelled out in more detail in the report, suggest that the appropriate response to an economy losing, say, output or jobs in apparel or in assembly of consumer electronics raises different concerns than losing output or jobs in chemicals or in computers.

The very fact that responses will differ across categories of manufacturing makes it hard to give extremely concrete advice, and the McKinsey report is full of terms like "granularity" and "flexibility." To me, these kinds of terms describe a world in which firms need to recognize that ib tge demand side, the world economy and national economies are actually composed of many different and smaller markets, which have somewhat different desires for products and even for what features should be prominent on a given product (like a mobile phone or a fast food meal). And on the production side, decisions are no longer about choosing a location to build the largest factory with the cheapest labor, but instead about how to draw upon a geographically separate network of resources, including both direct production supply chains, but also R&D, management, financial, marketing, and other resources as needed.


The McKinsey report makes the point this way: "The way footprint decisions have been made in the past, especially the herd-like reflex to chase low-cost labor, needs to be replaced with more nuanced, multifactor analyses. Companies must look beyond the simple math of labor-cost arbitrage to consider total factor performance across the full range of factor inputs and other forces that determine what it costs to build and sell products—including labor, transportation, leadership talent, materials and components, energy, capital, regulation, and trade policy."

The role of "manfacturing" in these kinds of far-flung networks becomes a little blurry. On one side, there are a rich array of new technologies and innovations that are likely to continue transforming manufacturing, and the U.S. economy certainly should seek to play a substantial role in many of these technologies. But on the other side, implementing many of these technologies involves a blending of creativity and skill among many workers, only some of whom will actually be in direct physical contact with machinery that produces goods and services. Here's the McKinsey report:


"A rich pipeline of innovations promises to create additional demand and drive further productivity gains across manufacturing industries and geographies. New technologies are increasing the importance of information, resource efficiency, and scale variations in manufacturing. These innovations include new materials such as carbon fiber components and nanotechnology, advanced robotics and 3-D printing, and new information technologies that can generate new forms of intelligence, such as big data and the use of data-gathering sensors in production machinery and in logistics (the so-called Internet of Things). ...

Important advances are also taking place in development, process, and production technologies. It is increasingly possible to model the performance of a prototype that exists only as a CAD drawing. Additive manufacturing techniques, such as 3-D printing, are making prototyping easier and opening up exciting new options to produce intricate products such as aerospace components and even replacement human organs. Robots are gaining new capabilities at lower costs and are increasingly able to handle intricate work. The cost of automation relative to labor has fallen by 40 to 50 percent in advanced economies since 1990."


The U.S. economy has some notable advantages in this emerging new manufacturing sector. Compared to many firms around the world, U.S. firms are used to the concept of responding to customers and being flexible over time in production processes. Many firms have good internal capabilities and external connections for new technology and innovation. Moreover, U.S. firms have the advantage of operating in an economy with a well-established rule of law, with a fair degree or transparency and openness, and with a background of functioning infrastructure for communications, energy, and transportation. As the constellations of global manufacturing shift and move, many U.S. firms are well-positioned to do well.


But U.S. also faces a large and unique challenge: the enormous scale and dimension of the U.S. economy has meant that many U.S. firms could stay in the U.S. economy and not try that hard to compete in world markets. However, especially for manufactured goods, most of the growth of consumption in the decades ahead will be happening in the "emerging market" economies of east and south Asia, Latin America, and even eastern Europe and Africa. When U.S. manufacturing firms focus on "granularity" and "flexibility," they need to look at locations for sales and production that are often outside their traditional geographic focus.