Options for the Deficit from CBO

The Congressional Budget Office has just published a report called "Choices for Deficit Reduction." To me, the bottom line is that coming to grips with the U.S. fiscal situation in the medium run is going to require going outside everyone's current comfort zone.

To set the stage, here are the CBO projections for the debt/GDP ratio in the next couple of decades. As I've discussed before on this blog (for example, here), the CBO is required by law to calculate a "baseline scenario" which projects the debt under current law. The difficulty with this approach is that current law can incorporate all kinds of future spending cuts or tax increases that aren't actually going to happen when the time comes. Thus, the CBO also calculates an "alternative fiscal scenario," which is based on four assumptions:

The "alternative fiscal scenario" provides a useful starting point, because you can then look at how changing each of these four assumptions, along with many other policy changes, would affect the debt/GDP over time.Under the alternative scenario, the debt/GDP is headed for the danger zone of about 90-100% debt/GDP by the early 2020s, and then is headed for unimaginably high levels after that.  (For discussions of why that 90-100% ratio is likely to be important, see earlier posts here, here, and here.)

So what do the possible policy options look like? They come in three tables: possibilities for reducing mandatory spending, possibilities for reducing discretionary spending, and possibilities for increasing taxes. You'll notice that many of the recommendations come with various footnotes and caveats, which in turn require heading for the actual report. Some of the recommendations overlap in various ways (like different methods of altering Social Security or Medicare), and so you can't just add up all the choices. But for a quick sense of the issue, just glance at the right-hand numbers showing the total projected change in the deficit. If you take the intermediate goal of cutting the projected 2020 deficit by $750 billion, most people will very quickly run out of easily palatable options.

For example, repealing the expansion of health insurance coverage and the "individual mandate" to buy health insurance from the Affordable Care Act would reduce the 2020 deficit by about $190 billion, which is real money, but not nearly enough (and would leave tens of millions of Americans again without health insurance). Or letting the the tax cuts enacted in 2001, 2003, and 2009 expire only for couples filing joint tax returns with income over $250,000 per year and for single taxpayers with income over $200,000, along with indexing the alternative minimum tax (AMT) for inflation, reduced the 2020 deficit by $110 billion, which is real money, but not nearly enough to do what is needed. So even if Republicans and Democrats would compromise on eliminating Obama's health care plan in exchange for eliminating the Bush tax cuts for those above $200,000 or $250,000 per year, they would have less than half of the $750 billion deficit reduction. To put it another way, Americans and U.S. economy are more drunk on deficit spending, and withdrawal is going to be more painful than most people realize.

Here are the three tables of options: 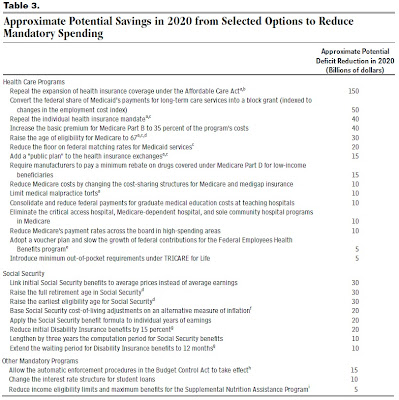 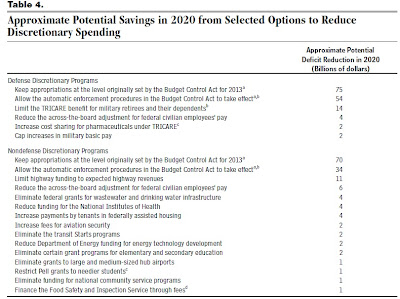 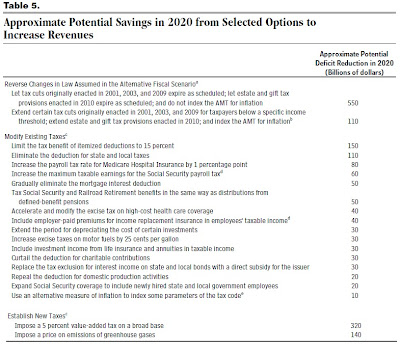