Marginal Tax Rates on the Poor and Lower Middle Class

There's always a lot of talk about how marginal tax rates affect the incentives of those with high incomes. But how high are marginal tax rates on those with low incomes? The question might seem peculiar. After all, don't we know for a fact that those in the bottom of the income distribution, at least on average, don't pay federal taxes? Instead, on average, they get "refundable" tax credits from the federal government for programs like the Earned Income Tax Credit and the child credit. As a result, the Congressional Budget Office has calculated that the bottom two quintiles of the income distribution pay a negative income rate. Even with payroll taxes for Social Security and Medicare and federal excise taxes on gasoline, cigarettes and alcohol added in the bottom quintile of the income distribution pays only 1% of its income in federal taxes.

But the marginal tax rate that someone owes is not the same as the average tax rate that they owe. Those with low incomes can often face a situation where, as their income rises, the amount that the receive from the Earned Income Tax Credit declines. There are other non-tax programs like Food Stamps, Medicaid, Temporary Assistance to Needy Families (welfare), and Children's Health Insurance Program (CHIP) that phase out as income increases. Thus, for each marginal $1 that someone with a low income earns, the gradual withdrawal of these benefits means that their after-tax income rises by less than $1. In addition, even those with low incomes pay Social Security and Medicare payroll taxes. 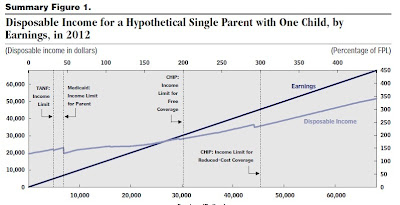 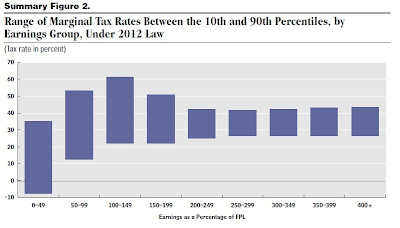