The Case For and Against Advertising

Advertising may be that rare case where economists are less cynical than the general public. For many people, advertising is the epitome of exploitative and wasteful capitalism, encouraging people to feel bad unless they spend money they don't have for goods and services they don't actually want or need. Many business firms spend their advertising dollars ruefully,while quoting the old line: "I know that half of the money I spending on advertising is wasted, but the problem is that I don't know which half."

But while many see this glass as totally empty, economist see it as half-full. Yes, advertising can be a arms-war of expenditures that benefits no one, while creating consumer dissatisfaction. But it can also be a form of active competition leading to lower prices and better products for consumers. Here, I'll give a few facts about advertising, review the classic arguments from back in Alfred Marshall's 1919 classic Industry and Trade, and point out a bit of recent evidence that consumers may well benefit from lower prices when advertising expands. 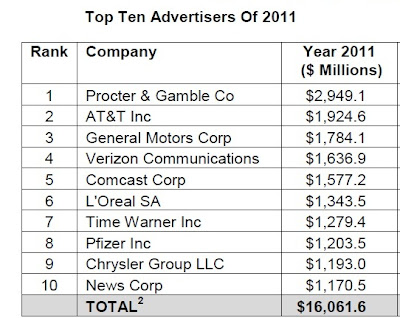 At the global level, according to Nielson's Global AdView Pulse Report, advertising totalled almost $500 billion in 2011. 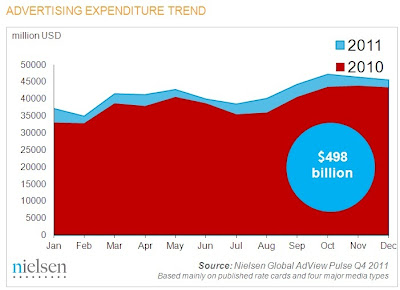 The great economist Alfred Marshall laid out the social pros and cons of advertising in his 1919 book, Industry and Trade. On one side, he emphasizes the role of advertising in providing information and building reputations, names, and trademarks; on the other hand, he points out that it can be carried to excess. Here are a few of Marshall's comments. Even a century ago, he was skeptical about how American advertising, in particular, was often being carried to excess.

"The reputation acquired by large general advertising is easy of attainment, though expensive. It is indeed seldom of much value, unless accompanied by capable and honourable dealing: but, when attained, it extends in varying degrees to all products made or handled by the business: a name or a trade mark which has gained good fame in regard to one product is a great aid to the marketing of others." (p. 180)

"On the other hand, some sorts of private retail trade are spending lavishly on competitive advertisements, most of which waste much of their force in neutralizing the force of rivals. In America, where they have been developed with more energy and inventive force than anywhere else ..." (p. 195)

"Some of the implements of constructive advertisement are prominent in all large cities.  For instance a good frontage on a leading thoroughfare; adequate space for the convenience of employees and for customers; lifts and moving staircases, etc., are all constructive, so long as they do not exceed the requirements of the business. That is to say, the assistance, which they afford to customers by enabling them to satisfy their wants without inordinate fatigue or loss of time, would be appropriate, even if the business were not in strong rivalry with others. But eager rivalry often causes them to be carried to an excess, which involves social waste; and ultimately tends to raise the charges which the public have to meet without adequate return." (p. 200)

"On the other hand the combative force of mere capital obtrudes itself in the incessant  iteration of the name of a product, coupled perhaps with a claim that it is of excellent quality. Of course no amount of expenditure on advertising will enable any thing, which the customers can fairly test for themselves by experience (this condition excludes medicines which claim to be appropriate to subtle diseases, etc.), to get a permanent hold on the people, unless it is fairly good relatively to its price. The chief influence of such advertisement is exerted, not through the reason, but through the blind force of habit: people in general are, for good and for evil, inclined to prefer that which is familiar to that which is not." (p. 194)

"In conclusion it should be noted that academic students and professional advertising agents in America have united in applying modern methods of systematic and progressive analysis, observation, experiment, record, and provisional conclusion, in successive cycles to ascertaining the most effective forms of appeal. Psychology has been pressed into the service: the influence which repetition of an advertisement exerts has been subsumed as a special instance of the educative effect of repetition." (p. 201)

Having stated the basic tradeoff of advertising, what empirical evidence is available on the point? Ferdinand Rauch describes some of his recent work on "Advertising and consumer prices" at the Vox blog. (I saw this study mentioned by Phil Izzo at the Real Time Economics blog.) Rauch points out that the evidence on  how advertising affects prices seems to vary across industries:
"Existing empirical evidence has demonstrated that prices of various goods react to changes in advertising costs differently. For example, advertising seems to decrease prices for eyeglasses (Kwoka 1984), children’s breakfast cereals (Clark 2007) and drugs (Cady 1976), while it increases the supply price in brewing industries (Gallet and Euzent 2002)."
Rauch's recent work takes a different approach by looking at what happened in Austria when a situation in which each region imposed its own different tax rate on advertising changed to a situation in which one common national tax rate was imposed on advertising. As a result of this change, the tax rate on advertising rose in some regions and decreased in others. He finds:

"I first show that the taxation of advertising is indeed a powerful instrument to restrict advertising expenditures of firms. I also show that advertising increased consumer prices in some industries such as alcohol, tobacco and transportation, in which the persuasive effect dominates. But it also decreased consumer prices in other industries such as food. I use data from existing marketing studies which make it possible to relate different responses of market prices to characteristics of advertisements in industries. I can indeed show that those industries which exhibit the informative price include more information in their advertisements, consistent with the interpretation of informational and persuasive forces of advertising.

Thus, the challenge for all of us as consumers of advertising is to consume the information that it provides without also swallowing the persuasion that it offers. In addition, whenever I feel annoyed that perhaps advertising has cost me some money, I try to remember that advertising pays essentially all of the production costs for my morning newspaper and for most of the television that I watch.
Posted by Timothy Taylor at 6:00 AM