But although the figure shows that the unemployment rate remains high, it also shows that the U.S. labor market is slowly healing itself. For evidence on the internal functioning of U.S. labor markets, beyond the headline unemployment rate, I now and then check the JOLTS report--that is, Job Openings and Labor Turnover Survey--also published by the Bureau of Labor Statistics. The data for February 2013 was just released, and here are a few figures that caught my eye.

The number of actual jobs has been rising fairly steadily since the end of the recession in mid-2009, along with the number of job openings. 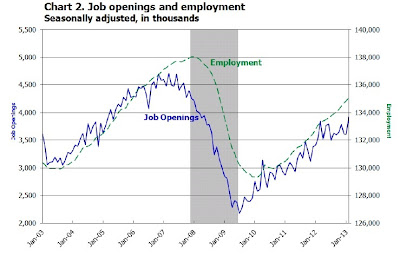 One of the detailed job market indicators I find most intuitively revealing is the ratio of unemployed people to job openings. When the labor market is fairly healthy, like in the early 2000s, this ratio is maybe 2: 1 or 3:1. During the unsustainable bubble economy just before the Great Recession, the ratio fell to about 1.5:1. During the worst of the recession, it exceeded 6:1. It has now dropped back to a bit above 3:1--still uncomfortably high, but not as comprehensively awful as a few years back. 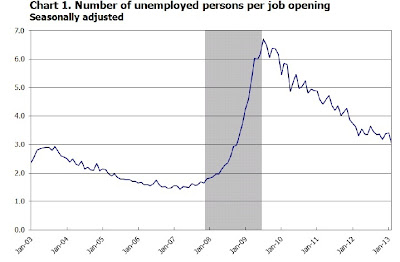 Another intuitively revealing measure looks at how people leave jobs. Do they leave by quitting, which can be viewed as a voluntary departure? Or do they leave by layoffs or discharges, which is surely more of an involuntary departure? In a healthy U.S., labor market, quits exceed layoffs/discharges: that is, more people are changing jobs by choice than by necessity. During the recession, this pattern flip-flopped for a time. But layoffs and discharges have now dropped to lower levels than before the recession, and quits are on the rise. 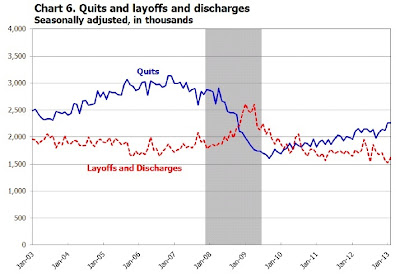 When it comes to the U.S. labor market picture, it feels uncomfortable to say anything positive. I'm sure to get emails pointing out that the share of adults no longer in the labor force, and thus not counted as unemployed, is rising, as well as less savory notes accusing me of ignorance and heartlessness and being out of touch with the problem of unemployment. But of course, my point here is not to make the clearly incorrect claim that the U.S. labor market is already bathed in a ruddy glow of good health--only that it has been slowly improving along multiple interrelated dimensions for the last few years.
Posted by Timothy Taylor at 6:00 AM