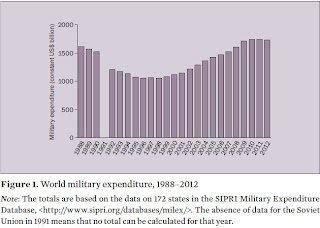 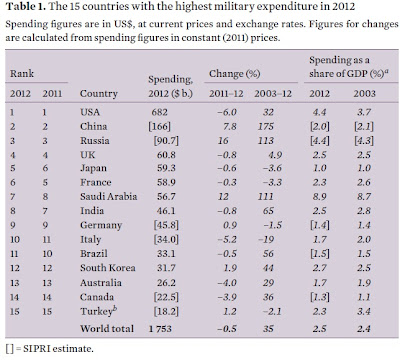 But look at some of the countries in the top 15 in military spending: China at #2, Russia at #3, Japan at #5, Saudi Arabia at #7, India at #8, Brazil at #11. The regional patterns of military spending do seem to be shifting, albeit slowly. In the last few years, military spending is down in North American and western Europe, but up in many other regions. Military spending in Asia overtook that of western and central Europe a few years ago, and the gap is widening. 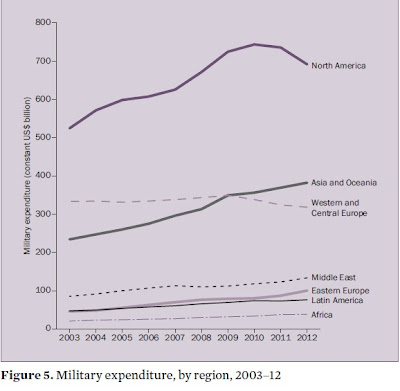 As I have confessed before on this blog, I have no particular expertise in global military and geopolitical issues. When political candidates argue over whether the U.S. should strive for a capability to fight two wars at a time, one-and-a-half wars at a time, or one war at a time, and what level of spending is appropriate in each case, I am out of my depth. But I can read a trendline.
After the disintegration of the Soviet Union in the early 1990s, the U.S. Was by far the preeminent military power in the world, but as countries like China, India, and Brazil continue their rapid economic growth, this U.S. military advantage will surely diminish. Moreover, while the ability of the U.S. military to win a set battle remains largely unchallenged, the ability of the U.S. to achieve its broader geo-strategic goals through a strategy based heavily on military force is certainly in question.

I was struck some commentsw that Henry Kissinger, no shrinking violet when it came to the application of force, gave in an interview last fall. Kissinger said:


"I have seen and been involved in four wars that we started with great enthusiasm, and which turned into a debate about the speed of withdrawal—with no other outcome. We must develop a policy where, if we engage ourselves, we prevail. This means a revision of our military strategy, which has so far been based on physically stopping aggression by overwhelming it. It got us into a position where the enemy could control the pace of operations, and the length of the war. We have to develop a peripheral strategy. When the British fought Napoleon, they did not go into the continent of Europe. The strategy in Spain drained France without putting Britain into a position where it was risking its cohesion and its capabilities. I think we need a strategic concept of that nature."

Something tells me that my own sense of appropriate U.S. geo-strategic goals would not necessarily align closely with those of Henry Kissinger. But the idea of "peripheral strategy," in which potential conflicts are shaped and managed and defused by methods that do not require "physically stopping aggression by overwhelming it," seems important to pursue.