Does Banning Texts While Driving Work?

A friend of mine argues that the roadways are full of people driving as if they had recently knocked back a beer or a glass of wine. But their tipple isn't alcohol; instead, it's the distractions of cell-phones and texting. There's at least some circumstantial evidence that the parallel between how alcohol and texting affect driving is all too real: a few years back, Car and Driver magazine had a few people drive while texting and then drive while drunk, on a closed course. The effects on reaction times  were similar, with texting being a little more disabling. One study has estimated that 2700 deaths per year were occurring in the mid-2000s as a result of texting-while-driving.

Thus, it's not surprising that from 2007 through January 2012, 33 states had banned texting while driving. Rahi Abouk and Scott Adams examine the evidence about what happened next in "Texting Bans and Fatal Accidents on Roadways: Do They Work? Or Do Drivers Just React to Announcements of Bans?" The paper appears in the April 2013 issue of the American Economic Journal: Applied Economics (5:2, 179–199). The AEJ:Applied isn't freely available on-line, but many in academia will have access through library subscriptions.

By looking at data across 33 states, the authors can look for how texting-while-driving bans in one state affect accidents in that state at the time before and after the ban, which helps to sort out the effect of the ban from other issues affecting auto accidents. They can also look at states where the ban is enforce more or less harshly. In particular, they focus on data about single-car accidents, which took a significant jump in the early and mid-2000s as texting became popular. As they explain: "A driver with passengers might be less willing to put them in danger by texting. Moreover, they may find less need to text if someone is there to speak with them or stop them from texting if they perceived the risk to be dangerous. Multiple vehicle accidents typically are caused by more than one factor since there are multiple drivers." Of course, this doesn't mean that texting doesn't also contribute to multi-car accidents! It just means that if you are seeking evidence in particular about the effect of texting-while-driving bans, single-car crashes are a category where the cause-and-effect connection from legislation is likely to be more clear.

Abouk and Adams summarize their findings in this way: "Our evidence suggests fatal accidents are reduced by bans if they are enforced as a primary offense and cover all drivers. Alternatively, accidents less likely to be related to text messaging, particularly multiple vehicle or multiple occupant accidents, are not reduced significantly. The strong impact of texting bans on single-vehicle, single-occupant crashes is short-lived. While the effects are strong for the month immediately following ban
imposition, accident levels appear to return toward normal levels in about three months. This suggests that a texting ban immediately saves lives, but the positive effect cannot be sustained. The declining impact of traffic safety policies over time is not uncommon and has been observed in other regulations. Given the large impact of texting bans in the initial months following enactment, however, the evidence of the paper suggests greater enforcement of these laws likely can save more lives."

Here's are a couple of illustrative figures from their paper that give a sense of their findings. On the horizontal axis, the zero point is when the texting-while-driving ban was passed. Thus, the figures show the pattern of accidents both before and after the ban. At the time of the ban, accidents drop, as shown by the dark line. (The dashed lines are the statistical confidence interval around the main estimates). But then, a few months after the ban, accidents creep back up again. The upper panel shows states with stronger enforcement; the bottom panel shows states with weaker enforcement. 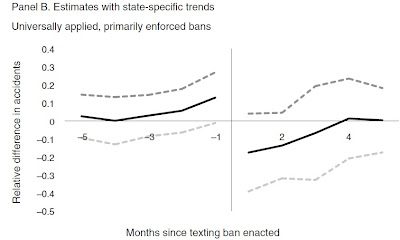 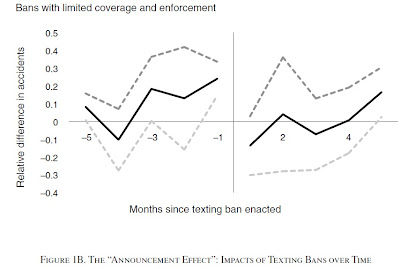 To me, the lesson here is that despite all the states which have passed laws about texting-while-driving, as a society we are still somewhat ambivalent about the practice. We don't yet think of it with the condemnation given to drunk driving. Legal enforcement and social opprobrium just aren't as fierce in the case of texting-while-driving. But both texting-while-driving and drunk driving pose a real and serious threat both to the driver of the vehicle, and also to all the other drivers on the road.