Since Japan's bubble economy burst in the early 1990s, large budget deficits are one policy that the government has used in an attempt to stimulate the moribund economy. Japan's budget deficits have been at least 5% of GDP since the late 1990s, and more like 9-10% of GDP in the last five years. The OECD discusses Japan's budget deficits, and the rest of its economic situation, in the just-published OECD Economic Surveys JAPAN.  The "Overview" for the study is available here; the entire report can be read for free via a clunky on-line browser here.

In terms of gross government debt, Japan is the world leader. This chart shows the five countries with largest ratios of gross debt/GDP. Japan has been the clear leader since about 2000, although Greece has been making a run at the top spot in the last few years. 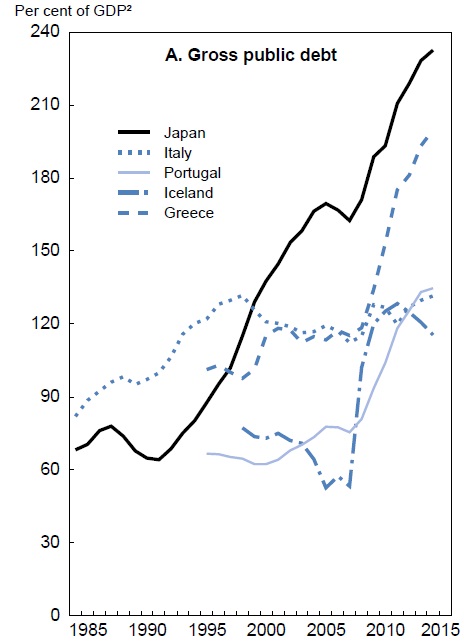 However, most economists tend to focus on net government debt, which subtracts out debt that the government owes to itself. (For example, in the U.S. context, net debt doesn't count debt held by the Social Security trust fund.) Thus, net debt focuses on how much the government has borrowed in global capital markets. By this measure, Italy was the world debt leader through the 1990s and into the early 2000s, but since then, Japan and Greece have been battling it out for the lead. 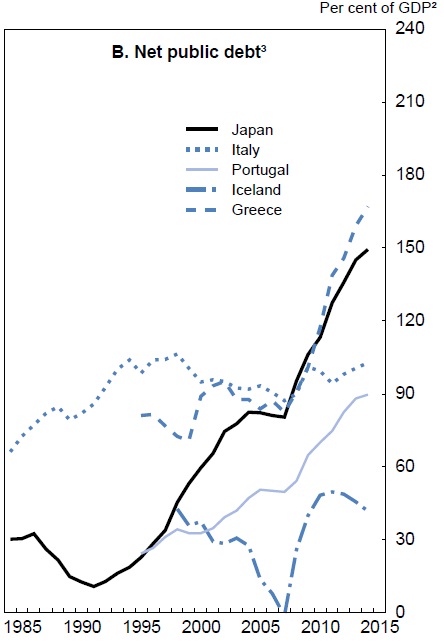 Japan's enormous debt poses a challenge both to those who advocate larger budget deficits, and for those who do not.  For those who advocate larger budget deficits, the challenge is that Japan's enormous rise in debt over about two decades has clearly not been sufficient to restore Japan's economy to robust health. Of course, one can object that a number of other complementary policies are also needed, and the OECD report discusses monetary policy, deregulation, energy policy, education, labor market policies, and more. But if the truly extraordinary increase in Japan's government debt has not been sufficient to stimulate its economy, it suggests that these other policies are of considerable importance.

On the other side, for those who advocate smaller deficits, Japan's enormous rise in government debt over two decades, with net debt reaching 150% of GDP,  has clearly not led to a financial crisis either.

The OECD report straddles the fence here. It warns that Japan's debt is far too high, and calls this the country's "paramount policy challenge." But it also argues that immediate attempts to bring down this debt could keep Japan's economy sluggish, and so argues that a "flexible fiscal policy" is needed.

Here is the OECD report, dancing: "The public debt ratio has risen steadily for two decades, to over 200% of GDP. Strong and protracted consolidation is therefore necessary to restore fiscal sustainability, which is Japan's paramount policy challenge. ... Stopping and reversing the rise in the debt-to-GDP ratio is crucial. Stabilising the public debt ratio by 2020 may require, depending on the evolution of GDP and interest rates, an improvement of the primary fiscal balance from a deficit of 9% of GDP in 2012 to a surplus as high as 4% by 2020. Controlling expenditures, particularly for social security in the face of rapid population ageing, is key. Substantial tax increases will be needed as well, although this will also have a negative impact on growth. Given the size and duration of fiscal consolidation, Japan faces the risk of a marked rise in interest rates, threatening a banking system that is highly exposed to Japanese government debt."

Contemplate that for a moment: the recommendation is for moving from a deficit of 9% of GDP in 2012 to a surplus of 4% of GDP by 2020--that is, a swing in the government budget balance position of 13% of GDP in just 8 years.

The U.S. debt situation differs from that of Japan in two ways: 1) the U.S. debt/GDP ratio is far smaller; and 2) domestic savings in Japan are high enough that the country can finance its government borrowing from domestic sources. In contrast, the U.S. government has depended for years on inflows of foreign investment capital to finance its debts. Thus, Japan's government needs to be concerned that its domestic savers will start looking elsewhere for higher rates of return, while the U.S. government needs to be concerned as to whether international investors will continue to put their money in Treasury bonds.
Posted by Timothy Taylor at 6:00 AM