I remember when I was a high school debater back in the 1970s, and the oil price shocks led to arguments over the prospects for solar, wind, geothermal, and other kinds of power.  Here we are more than three decades later, and carbon-based fuels continue to rule. The International Energy Administration surveys the global situation in "Tracking Clean Energy Progress 2013."

Here is the Energy Sector Carbon Intensity Index. As the IEA report explains: "The IEA Energy Sector Carbon Intensity Index (ESCII) tracks how many tonnes of CO2 are emitted for each unit of energy supplied. It shows that the global aggregate impact of all changes in supply technologies since 1970 has been minimal. Responses to the oil shocks of the 1970s made the energy supply 6% cleaner from 1971 to 1990. Since 1990, however, the ESCII has remained essentially static, changing by less than 1% ..." 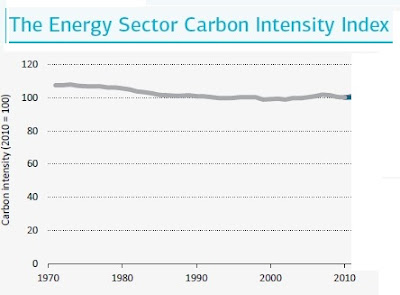 (For the record, I edited this figure from the version in report by cutting off the projections for the future,and stopping with the present.)


Just to be clear, the IEA is a cheerleader for clean energy. Not that there's anything wrong with that! The report advocates "at least" tripling R&D budgets for clean energy. I'm typically supportive of most R&D efforts, but it's important to remember that the U.S. government has spent about $150 billion (in 2012 dollars) on energy R&D since the 1970s, without much effect on moving away from carbon-based energy. R&D spending doesn't guarantee effective commercialization. But the report also offers a useful reminder that cleaner energy is about a lot more than trying to force-feed solar and wind power companies. For example:

Deal with Coal. The report notes: "Coal technologies continue to dominate growth in power generation. This is a major reason why the amount of CO2 emitted for each unit of energy supplied
has fallen by less than 1% since 1990... Coal-fired generation, which rose by an estimated 6% from 2010 to 2012, continues to grow faster than non-fossil energy sources on an absolute basis. Around half of coal-fired power plants built in 2011 use inefficient technologies. ... Coal plants are
large point sources of CO2 emissions, so concerted efforts to improve their efficiency can
significantly reduce coal consumption and lower emissions." TThus, one step is to make burning coal, where that is going to happen, more efficient.  In addition, natural gas can play a substantial role to lower emissions of carbon and various pollutants by offering a practical alternative to coal-fired electricity generation.


Push Carbon Capture and Storage. Maria van der Hoeven writes in her Foreword: "I am particularly worried about the lack of progress in developing policies to drive carbon
capture and storage (CCS) deployment." The report notes: "While 13 large-scale carbon capture and storage (CCS) demonstration projects are in operation or under construction, progress is far too slow to achieve the widespread commercial deployment envisioned ..."

Smarter electrical grids. Smart grids can operate in a number of ways. They can allow charging higher prices at times of peak loads, to encourage shifting demand. They can be programmed so that heating or cooling can be automatically adjusted when demand is especially high. They are going to be a necessity if the electrical grid is to be based on a wider range of energy sources, some of which may vary with sun and wind.

Those who express concern over consequences of high energy use--from conventional pollutants to the risks of climate change to effects of price fluctuations and geopolitical issues--are sometimes a little too quick to offer a policy prescription that involves waving a magic wand of R&D spending over solar or wind or biofuels. I'd be delighted if that magic wand actually produced a commercially viable and vast source of clean energy, and maybe it will. But in the meantime, sensible policy-makers need to focus on cobbling together a range of less glamorous but perhaps more practical alternatives.