Long-term economic growth in the United States has a remarkable continuity: indeed, on a certain kind of graph, it almost looks like a straight line. The graphs that follow are from the Measuring Worth website, an extremely useful resource for long-term economic data led by Lawrence Officer and Samuel Williamson. At the website, you will find long-run data on GDP, earnings, prices, interest rates, and other statistics for the U.S., U.K, Japan, and China. One useful purpose of the website is to use long-run data on prices, household consumption, income, and output as ways of putting in perspective what things were worth at different times. 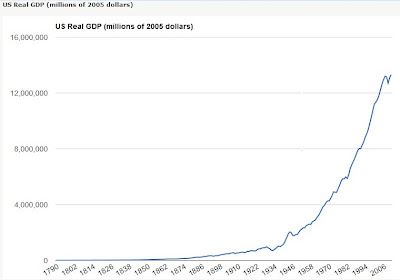 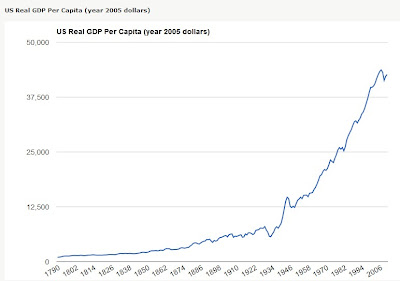 But for the uninitiated, these graphs may not deliver a clear message. It looks on these graphs as if growth was slow in much of the 19th century, but then accelerated in recent decades. It looks as if the most recent Great Recession was similar in depth to the Great Depression of the 1930s.

The problem here arises because of a difference between absolute levels of growth and rates of growth. Imagine, for example, an economy that starts out a size of 100, and grows by 1 every year, so that after two centuries it has reached a size of 300. If you think about it for a moment, the growth rate of this economy is slowing every year: it grew by 1% the first year (1/100), but by less than 1 percent the second year (1/101) and by the end of 200 year is growing at only about one-third of a percent (1/300). Thus, a line of straight slope on the graph above would actually show a steadily declining rate of growth. Now imagine that the economy starts at a growth rate of 100, but grows at 1% each year for 200 years. As this growth rate compounds, with each year building on the previous one, this economy will reach a size of 731 after 200 years. The steady rate of growth over time will look be a larger absolute amount--a difference that will look large after a couple of centuries.

In a logarithmic graph, a straight line shows that the same percentage rate of growth is continuing from year to year. Here is the same data as in the above figure from the Measuring Worth website, but now presented on a logarithmic graph. Notice that both graphs are nearly straight lines--which means that the rate of growth has been fairly consistent over time. Notice also that when expressed in terms of growth rates, the Great Depression is clearly larger than the more recent Great Recession. 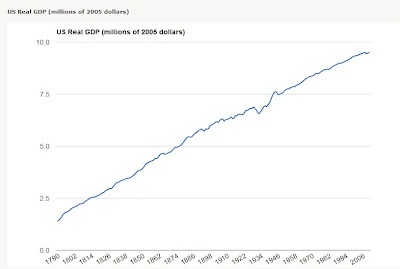 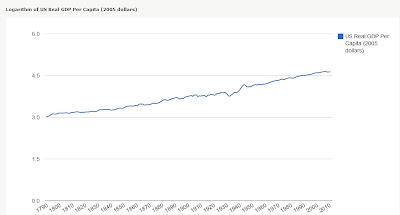 Of course, the persistence of per capita economic growth in the U.S. economy over the last couple of centuries doesn't prove that such growth will continue. Future growth prospects depend on investments in human capital, physical capital, and new technology, along with a market-oriented environment that provides incentives for such investment and innovation. Sometimes I meet a true skeptic about the future of economic growth, who views the entire economy as a house of cards that might tumble down tomorrow. Maybe they will prove to be correct! But I sometimes point out that when you are arguing that a remarkably persistent pattern of growth of the last several centuries is about to end suddenly, history is not on that side of the argument.