Everyone agrees that entrepreneurs are important to an economy that, like the U.S., relies on innovation and productivity growth. But concrete data on the numbers and characteristics of entrepreneurs are not always easy to come by. The Global Entrepreneurship Monitor project has been seeking to address this issue since 1999 using survey data. The GEM project now surveys 54 countries, and the results for the 2011 U.S. survey of 5800 adults are now available. It is publishes as the National Entrepreneurial Assessment for the United States of America, written by
Donna J. Kelley, Abdul Ali, Edward G. Rogoff, Candida Brush, Andrew C. Corbett, Mahdi Majbouri and Diana Hechavarria.

In general, survey measures suggest that many Americans think of themselves as potential or actual  entrepreneurs. "Capabilities perceptions in the United States are among the highest of the innovation-driven economies.Over 55% of adults (aged 18–64) believe they have the skills and ability to start a business. This measure shows a relatively stable pattern over time."

But measures of actual entrepreneurship show some differing results. One measure is Total Entrepreneurial Activity (red bars in the graph below), which refers to what share of the population is starting or running a new business. By this measure, the U.S. leads the way among high-income economies. Another measure is Entrepreneurial Employee Activity (blue bars in the graph below), which seeks to measure "employees developing or launching new goods or services or setting up a new business unit, a new establishment or subsidiary for their main employer." By this measure, the U.S. performs well, but lags behind Sweden, Denmark, Belgium and Finland. Of course, this difference points out that  organizations that encourage "intrapreneurs" may be as important as entrepreneurs who start businesses from scratch. 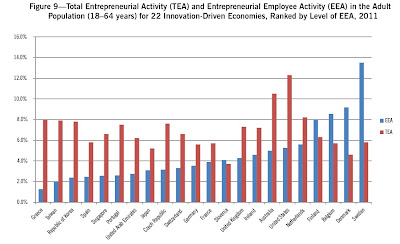 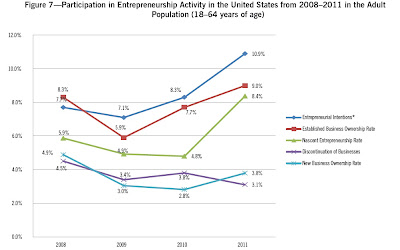 
The report has lots more breakdowns of U.S. entrepreneurs by age, education, gender, income, industry, export focus, and other factors. While I find these survey results thought-provoking, I confess that interpreting the results remains difficult for me. When I see data to the effect that 55% of Americans consistently believe that have the skills and ability to start a business, I find myself wondering (a bit cynically, I confess) what percentage also believe that they could be professional athletes--if only they had practiced a little more in high school.

When I seen rates of entrepreneurial activity rising in 2010 and 2011, I find myself wondering if this should be interpreted more as a reaction of people who lacked other opportunities in the dreadful job market of these years and were trying to scrape together some income by working on their own or with a few friends, rather than as a signal of greater entrepreneurial vigor.  There's a difference in the economic effects of entrepreneurs who start businesses which grow and hire and individuals or small groups who make a living working independently, but who have no real opportunities or plans for expanding.

I also find myself remembering the arguments by John Maynard Keynes to the effect that entrepreneurs as a group are driven by "animal spirits," not a rational calculation  of costs and benefits. For a a nice overview of what Keynes meant by the term "animal spirits," and the earlier uses of the the term in Descartes' analysis of physiology, I recommend this short article by Roger Koppl that appeared in back in the Summer 1991 issue of my own Journal of Economic Perspectives.  (This article, like all JEP articles back to the first issue in 1991, is freely available on-line courtesy of the American Economic Association.) Koppl wrote:


"Although Keynes would have agreed that animal spirits can lead to bubbles and fads and crashes, he also argued that positive investment generally occurs because of a mistake by the investor, a mistake undertaken because of animal spirits. Keynes argued that since entrepreneurs and investors would often be immobilized if they sought to make rational economic decisions, animal spirits are needed to leapfrog rationality and bolster the economy."

Of course, even if entrepreneurship is heavily driven by animal spirits, the ultimate success of entrepreneurial efforts will still depend heavily on the economic, financial, regulatory, and institutional environment.