The Economics Knowledge of High Schoolers

I've never read the actual questions for an NAEP economics test. The report explains that the questions are categorized in three overlapping ways. There are three main content areas: the  market economy, the national economy, and the international economy.  The questions are also divided into three "cognitive" categories: knowing, applying and reasoning. And the questions are divided into three assessment contexts: individual and household questions on topics related to earning, spending, saving, borrowing, and investing; business questions related to entrepreneurs, workers, producers, and investors; and public policy questions on domestic and international issues.

The results are not especially encouraging. About one-fifth of 12th-graders are "below basic," and the median score is "basic" rather than "proficient." Here's the overall performance in 2006 and 2012.

The modest gains from 2006 to 2012 are mainly at the lower end of the test score distribution. 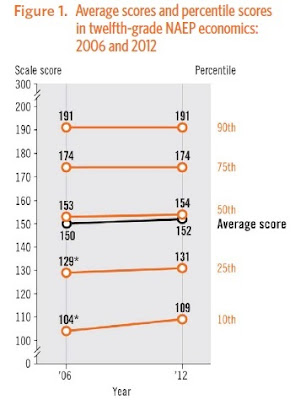 However, performance on the economics test follows a pattern that is common across subjects: those with more educated parents tend to perform considerably better. I won't enter here into the disputes over the extent to which these differences reflect family or social influences or differences in school performance. I'll just note that children from families where the parents have lower levels of education are especially in need of a basic understanding of how the economy works at a personal and social level. Also, whatever the cause, education level is clearly one of the ways that families with higher socioeconomic status pass that advantage on to their children.