When any large group of Americans seems to be moving backward over a sustained period of time, it's cause for concern. In Wayward Sons: The Emerging Gender Gap in Labor Markets and Education, a report written for Third Way, David Autor and Melanie Wasserman point out: "Over the last three decades, the labor market trajectory of males in the U.S. has turned downward along four
dimensions: skills acquisition; employment rates; occupational stature; and real wage levels." Moreover, Autor and Wasserman argue that these patterns are intertwined through mechanisms that involve marriage decisions and family structure. (Full disclosure: David Autor is the editor of my own Journal of Economic Perspectives, and in my everyday work life, he's my boss.)

Educational achievement for men went backward for a time, and has only recently been recovering back toward the levels of the 1960s. Here's a figure showing the pattern for the share of 35 year-olds who have completed a four-year college degree, but similar patterns arise if one looks at completing high school, or completing some college, or other measures of education. 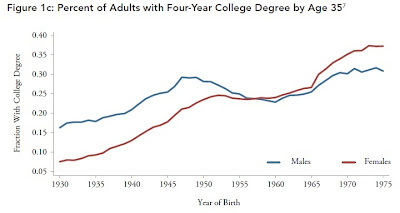 Employment rates for both white men and black men have been sagging since the 1970s, although they took an additional drop during the Great Recession. 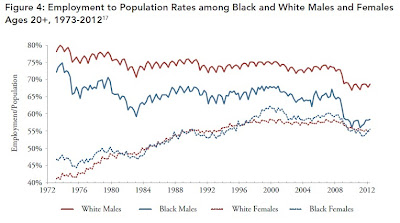 Meanwhile, wages have been sagging for low-skilled men workers in particular. This figure shows the percent change in real hourly wage levels over the period from 1979-2010. The left-hand figure shows patterns for younger workers, ages 25-39; the right-hand figure shows patterns for older workers, ages 40-64. The blue bars show outcomes for men, given different levels of education, while the red bars show outcomes for women. Clearly, it's been a lousy few decades to be a low-skilled worker. But for men, even being a college graduate hasn't been much help for those in the 40-64 age bracket. It's also notable that in every age and education category, wages changes for women have outperformed those of men. 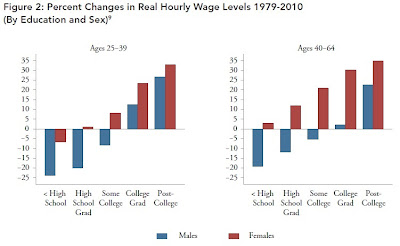 Autor and Wasserman offer a multipart hypothesis to tie these fact patterns together. They would be the first to admit that their explanation falls short of a rigorous cause-and-effect demonstration. But as they assemble what evidence is available, their story has considerable plausibility. Here's their summary of the argument:

"[W]we argue first that sharp declines in the earnings power of non-college males combined with gains in the economic self-sufficiency of women—rising educational attainment, a falling gender gap, and greater female control over fertility choices—have reduced the economic value of marriage for women. This has catalyzed a sharp decline in the marriage rates of non-college U.S. adults—both in absolute terms and relative to college-educated adults—a steep rise in the fraction of U.S. children born out of wedlock, and a commensurate growth in the fraction of children reared in households characterized by absent fathers.


Sorting out the causal factors behind these trends is a challenging but nonetheless central topic for social science research and public policy. A growing body of evidence supports the hypothesis that the erosion of labor market opportunities for low-skill workers in general—and non-college males in particular—has catalyzed a fall in employment and earnings among less-educated males and a decline in the marriage rates of less-educated males and females. These developments in turn diminish family stability, reduce household financial resources, and subtract from the stock of parental time and attention that should play a critical role in fomenting the educational achievement and economic advancement of the next generation."

I'll leave it to the reader to contemplate policy alternatives. But of course, the antedilivian prescription that making women economically worse off would some how rescue low-wage men is not a path either to economic growth or to social well-being. However, finding ways to improve the skills and job opportunities of low-skill workers could clearly have substantial social payoffs beyond the labor market.