Looking at trade between regions of the world reveals some intriguing patterns of the ties across the global economy. Here's a table based on data from the World Trade Organization, which splits the world into seven regions. The rows of the table are the regions where trade originates; the columns of the table are the regions that are destinations. CIS stands for "Commonwealth of Independent States," which is loosely speaking the set of countries that used to be part of the old Soviet Union. For context, total world trade in 2011 was $17.8 trillion. 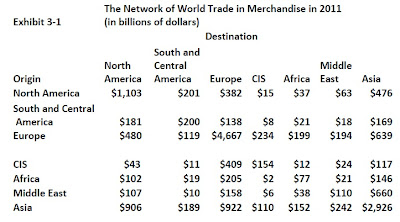 Here are some patterns that jump out at me:

1) Trade in the global economy is still dominated by trade within regions. For example, by far the biggest entries in the table are from Europe/to Europe and from Asia/to Asia.

4) It's intriguing to wander through the table and look for patterns (and yes, that's the kind of person I am). Some regions of the world are nearly disconnected from each other in any direct economic sense. The countries in the Commonwealth of Independent States receive only de minimus amounts of trade that originates from North America,  South and Central America, Africa, or the Middle East. The nations of Africa send more trade to North America, to Europe, and to Asia than they do to other nations of Africa. The Middle East and Africa, although they are contiguous, barely trade.

This table is part of the process of producing a third edition of my own Principles of Economics textbook.  Of course, I encourage those looking for a well-explained and reasonably priced book to go to the Textbook Media website and check it out. Thanks to Dianna Amasino for putting together the table for this edition. The source is International Trade Statistics 2012: World trade developments: Key developments in 2011. from the World Trade Organization.
Posted by Timothy Taylor at 6:00 AM