For the past 30 years, my actual paid job (as opposed to my blogging hobby) has been Managing Editor of the Journal of Economic Perspectives. The journal is published by the American Economic Association, which back in 2011 decided--much to my delight--that the journal would be freely available on-line, from the current issue back to the first issue in 1987. Here, I'll start with Table of Contents for the just-released Fall 2016 issue. Below that are abstracts and direct links for all of the papers. I will almost certainly blog about some of the individual papers in the next week or two, as well. 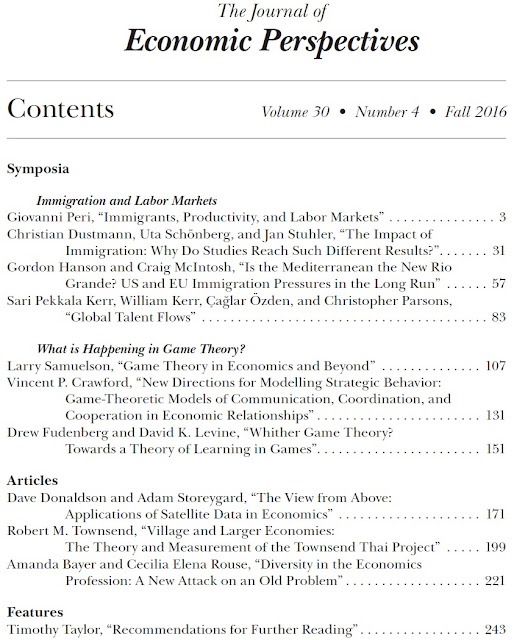 Immigration has been a steady force acting on population and employment within countries throughout human history. Focusing on the last four decades, we show that the mix of immigrants to rich countries has been, overall, rather balanced between college and non-college educated. The growth of immigration has been driven by immigrants from nonrich countries. The economic impact of immigration on receiving economies needs to be understood by analyzing the specific skills brought by immigrants. The complementarity and substitutability between immigrants and natives in employment, and the response of receiving economies in terms of specialization and technological choices, are important when considering the general equilibrium effects of immigration. In the United States, a balanced composition of immigrants between college and noncollege educated, together with the adjustment of demand and technology, imply that general equilibrium effects on relative and absolute wages have been small.

We classify the empirical literature on the wage impact of immigration into three groups, where studies in the first two groups estimate different relative effects, and studies in the third group estimate the total effect of immigration on wages. We interpret the estimates obtained from the different approaches through the lens of the canonical model to demonstrate that they are not comparable. We then relax two key assumptions in this literature, allowing for inelastic and heterogeneous labor supply elasticities of natives and the "downgrading" of immigrants. "Downgrading" occurs when the position of immigrants in the labor market is systematically lower than the position of natives with the same observed education and experience levels. Downgrading means that immigrants receive lower returns to the same measured skills than natives when these skills are acquired in their country of origin. We show that heterogeneous labor supply elasticities, if ignored, may complicate the interpretation of wage estimates, and particularly the interpretation of relative wage effects. Moreover, downgrading may lead to biased estimates in those approaches that estimate relative effects of immigration, but not in approaches that estimate total effects. We conclude that empirical models that estimate total effects not only answer important policy questions, but are also more robust to alternative assumptions than models that estimate relative effects.

"Is the Mediterranean the New Rio Grande? US and EU Immigration Pressures in the Long Run," by Gordon Hanson and Craig McIntosh
Full-Text Access (Complimentary) | Supplementary Materials
How will worldwide changes in population affect pressures for international migration in the future? We examine the past three decades, during which population pressures contributed to substantial labor flows from neighboring countries into the United States and Europe, and contrast them with the coming three decades, which will see sharp reductions in labor-supply growth in Latin America but not in Africa or much of the Middle East. Using a gravity-style empirical model, we examine the contribution of changes in relative labor-supply to bilateral migration in the 2000s and then apply this model to project future bilateral flows based on long-run UN forecasts of working-age populations in sending and receiving countries. Because the Americas are entering an era of uniformly low population growth, labor flows across the Rio Grande are projected to slow markedly. Europe, in contrast, will face substantial demographically driven migration pressures from across the Mediterranean for decades to come. Although these projected inflows would triple the first-generation immigrant stocks of larger European countries between 2010 and 2040, they would still absorb only a small fraction of the 800-million-person increase in the working-age population of Sub-Saharan Africa that is projected to occur over this period.

"Global Talent Flows," by Sari Pekkala Kerr, William Kerr, Çağlar Özden and Christopher Parsons
Full-Text Access (Complimentary) | Supplementary Materials
Highly skilled workers play a central and starring role in today's knowledge economy. Talented individuals make exceptional direct contributions--including breakthrough innovations and scientific discoveries--and coordinate and guide the actions of many others, propelling the knowledge frontier and spurring economic growth. In this process, the mobility of skilled workers becomes critical to enhancing productivity. Substantial attention has been paid to understanding the worldwide distribution of talent and how global migration flows further tilt the deck. Using newly available data, we first review the landscape of global talent mobility. We next consider the determinants of global talent flows at the individual and firm levels and sketch some important implications. Third, we review the national gatekeepers for skilled migration and broad differences in approaches used to select migrants for admission. Looking forward, the capacity of people, firms, and countries to success fully navigate this tangled web of global talent will be critical to their success.


Symposium: What is Happening in Game Theory?

"Game Theory in Economics and Beyond," by Larry Samuelson
Full-Text Access (Complimentary) | Supplementary Materials
Within economics, game theory occupied a rather isolated niche in the 1960s and 1970s. It was pursued by people who were known specifically as game theorists and who did almost nothing but game theory, while other economists had little idea what game theory was. Game theory is now a standard tool in economics. Contributions to game theory are made by economists across the spectrum of fields and interests, and economists regularly combine work in game theory with work in other areas. Students learn the basic techniques of game theory in the first-year graduate theory core. Excitement over game theory in economics has given way to an easy familiarity. This essay first examines this transition, arguing that the initial excitement surrounding game theory has dissipated not because game theory has retreated from its initial bridgehead, but because it has extended its reach throughout economics. Next, it discusses some key challenges for game theory, including the continuing proble m of dealing with multiple equilibria, the need to make game theory useful in applications, and the need to better integrate noncooperative and cooperative game theory. Finally it considers the current status and future prospects of game theory.

In this paper, I discuss the state of progress in applications of game theory in economics and try to identify possible future developments that are likely to yield further progress. To keep the topic manageable, I focus on a canonical economic problem that is inherently game-theoretic, that of fostering efficient coordination and cooperation in relationships, with particular attention to the role of communication. I begin with an overview of noncooperative game theory's principal model of behavior, Nash equilibrium. I next discuss the alternative "thinking" and "learning" rationales for how real-world actors might reach equilibrium decisions. I then review how Nash equilibrium has been used to model coordination, communication, and cooperation in relationships, and discuss possible developments

"Whither Game Theory? Towards a Theory of Learning in Games," by Drew Fudenberg and David K. Levine
Full-Text Access (Complimentary) | Supplementary Materials
Game theory has been a huge success in economics. Many important questions have been answered, and game theoretic methods are now central to much economic investigation. We suggest areas where further advances are important, and argue that models of learning are a promising route for improving and widening game theory's predictive power while preserving the successes of game theory where it already works well. We emphasize in particular the need for better understanding of the speed with which learning takes place.

"The View from Above: Applications of Satellite Data in Economics," by Dave Donaldson and Adam Storeygard
Full-Text Access (Complimentary) | Supplementary Materials

The past decade or so has seen a dramatic change in the way that economists can learn by watching our planet from above. A revolution has taken place in remote sensing and allied fields such as computer science, engineering, and geography. Petabytes of satellite imagery have become publicly accessible at increasing resolution, many algorithms for extracting meaningful social science information from these images are now routine, and modern cloud-based processing power allows these algorithms to be run at global scale. This paper seeks to introduce economists to the science of remotely sensed data, and to give a flavor of how this new source of data has been used by economists so far and what might be done in the future.

I have spent close to 20 years cataloging transactions between households in Thai villages, along with a research team. Just this past summer, we documented a number of ways in which even relatively poor villages have money markets not dissimilar in some ways from New York financial markets, with borrowing and repayment passing along links in credit chains. In another project, we have been looking at month-by-month school attendance, grade level completion, and graduation for children in these villages, following them from birth to graduation. The Townsend Thai project is a theory-based data collection endeavor, measuring and mapping village and larger economies into general equilibrium frameworks. This paper reviews a number of findings, implications, applications, and lessons learned, and considers next steps.

The economics profession includes disproportionately few women and members of historically underrepresented racial and ethnic minority groups, relative both to the overall population and to other academic disciplines. This underrepresentation within the field of economics is present at the undergraduate level, continues into the ranks of the academy, and is barely improving over time. It likely hampers the discipline, constraining the range of issues addressed and limiting our collective ability to understand familiar issues from new and innovative perspectives. In this paper, we first present data on the numbers of women and underrepresented minority groups in the profession. We then offer an overview of current research on the reasons for the underrepresentation, highlighting evidence that may be less familiar to economists. We argue that implicit attitudes and institutional practices may be contributing to the underrepresentation of women and minorities at all stages of th e pipeline, calling for new types of research and initiatives to attack the problem. We then review evidence on how diversity affects productivity and propose remedial interventions as well as findings on effectiveness. We identify several promising practices, programs, and areas for future research.

Posted by Timothy Taylor at 2:00 PM