Will the US Become a Nation of Renters?

The United States has long been a nation of homeowners, but in the aftermath of the housing bubble and the Great Recession, the rate of homeownership has been falling. Are we headed toward becoming a nation of renters. Cityscape, which is published three times each year by the US Department of Housing and Urban Development, asked four groups of experts to argue for or against this claim in its first issue of 2016: “By 2050, the U.S. homeownership rate, currently about 64 percent of households, will have fallen by at least 20 percentage points.”

The short answer to the question is that an additional fall of 10 percentage points in rates of US homeownership is plausible, according to some projections, but a fall of 20 percentage points seems quite unlikely. But let's put that answer in context. Here's the homeownership rate in the US since 1980. The housing boom and corresponding fall are clear. But is the recent decline just part of a cycle, or a sign of what is to come in the next few decades? Answering this question means trying to look past the recent housing bubble and to consider what might affect homeownership in the longer term. 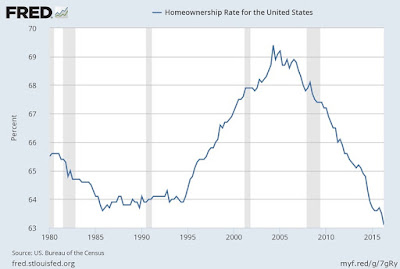 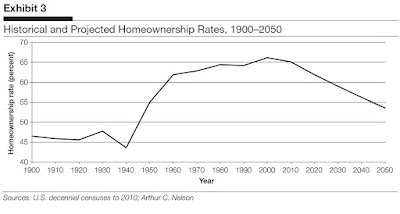 Dowell Myers and Hyojung Lee instead emphasize, in "Cohort Momentum andFuture Homeownership:The Outlook to 2050,"  that homeownership rates evolve over time with the aging of the population. Older households are more likely to own homes. But it then follows that if younger households are over time becoming less likely to be owners than their predecessors in the same age groups, then as time moves forward the rate of homeownership will fall. They write:

Homeownership for ages 35 to 39 topped out at 69 percent in the 1980 census. From that point forward, homeownership attainment began to very slowly recede, likely under the pressure of growing affordability problems and also the effects of declining marriage and increasing diversity, both of which added people from groups with historically lower homeownership. The decline accelerated dramatically, however, following the financial crisis. Between 2008 and 2015, the homeownership rate of this age group fell from 64.6 to 55.1 percent (-9.5 points). Meanwhile, for those ages 70 to 74, the rate declined only slightly in the same time period, from 81.7 to 80.7 percent (-1.0 point). The low rates among today’s young adults, unless they were to accelerate well beyond the normal pace of increase in future years, have potential to depress the U.S. homeownership rate as these cohorts begin to replace their elders later in the century.

The other papers are not as pessimistic about a fall in homeownership. In "A Renter or Homeowner Nation?", Arthur Acolin, Laurie S. Goodman, and Susan M. Wachter offer a projection based on evolution of age and race/ethnicity, and offer a mid-range projection of the homeownership rate falling to 57% by 2050.  In "The Future Course of U.S. Homeownership Rates,"  Donald R. Haurin offers a similar estimate, along with some other insights. He writes:


Why has the homeownership rate recently declined and will it continue to fall? Consider six causal factors. (1) The underlying preference for homeownership or privacy could have decreased—but no evidence supports this hypothesis. (2) The risk premium associated with house price volatility has increased, raising user costs; however, the premium should fall in the future as house prices stabilize. (3) Although mortgage lending practices tightened following the Great Recession, they changed little after 2012. Households take time to adjust to requirements for higher credit quality and larger down payments, but a decade should be sufficient for this adjustment to occur. (4) An increase in households’ expected mobility raises the transaction cost component of user costs, but recent changes indicate mobility has fallen in both the general and the young adult populations. (5) Rents have risen recently, but this rise should increase homeownership rates. (6) Perhaps the most important factor causing the recent decline in agespecific homeownership rates is the hangover of negative credit events, such as foreclosures, short sales, and bankruptcies. The impact on credit scores of these derogatory credit effects, however, is unlikely to last beyond 2020. Consideration of these six factors suggests that age-specific homeownership rates will stabilize no later than 2025, then will rebound, but not to the previous, boom-inspired peaks.

These estimates are all sensible enough in their own ways, but they felt a little unsatisfying to me, because they paid relatively little attention to some other factors that seem likely to shape the future of homeownership. For example, here's some Census Bureau data on differences inside and outside metro areas, and across regions. Notice that homeownship rates tend to be much lower in large cities: indeed, if a homeownership rate below 50% seems implausible to you, you might reflect on the fact that this is already a reality in US cities. Notice also that homeownership rates in the Northeast and West regions are already below 60% (of course, this is in substantial part because there are more large cities in these regions). Thus, one's belief about the future of homeownership is in some ways a statement about where people choose to live in the future. 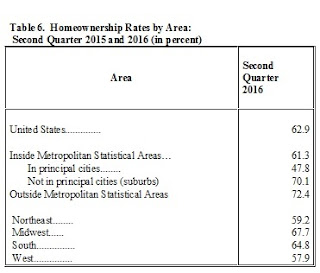 There are also changes in family structure. For example, US birthrates declined in the 1960s. The share of US family households who have a child living there was about 57% in the early 1960s, but has declined since that time to about 45%. Although fewer households have children, a larger share of young adults are living with their parents. As these young people move toward becoming few-child or no-child families on their own, it's not clear to me that they will be looking to own rather than rent.

Finally, the level of homeownership is in some ways a social choice, related to policies affecting supply of different kinds of homes (like the zoning decisions that affect large detached homes, small detached homes, condos, or rental apartments get built) and demand for homes (like whether the financial and tax system is set up in a way that encourages buying homes. Haurin writes: "Cross-sectionally, the homeownership rate varies substantially among developed countries (2013 data), ranging from 83.5 percent in Norway to 77.7 percent in Spain, 64.6 percent in the United Kingdom, and 53.3 percent in Germany." If the US wants a higher homeownership rate--and doesn't want to go through another housing price bubble (!)--it needs to think about the policies that might move toward that goal.