Global debt is at an all-time high: specifically, "nonfinancial debt," which is the combined debt of governments, households, and nonfinancial firms in the 113 countries that make up 94% of world GDP. The IMF discusses the situation in its "Fiscal Monitor" for October 2016, which is subtitled "Debt: Use it Wisely." The report starts (footnotes and citations omitted):


"The global gross debt of the nonfinancial sector has more than doubled in nominal terms since the turn of the century, reaching $152 trillion in 2015. About two-thirds of this debt consists of liabilities of the private sector. Although there is no consensus about how much is too much, current debt levels, at 225 percent of world GDP (Figure 1.1), are at an all-time high. The negative implications of excessive private debt (or what is often termed a “debt overhang”) for growth and financial stability are well documented in the literature, underscoring the need for private sector deleveraging in some countries. The current low-nominal-growth environment, however, is making the adjustment very difficult, setting the stage for a vicious feedback loop in which lower growth hampers deleveraging and the debt overhang exacerbates the slowdown. The dynamics at play resemble that of a debt deflation episode in which falling prices increase the real burden of debt, leading to further deflation." 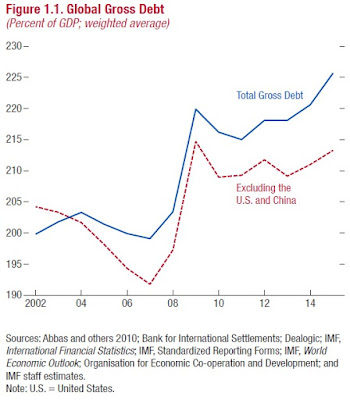 A few thoughts about this situation:

1) As the figure makes clear, the real debt issue here involves the US and China. The red dashed line, which shows global debt/GDP for the world not counting the US and China, shows only a modest rise over this period, from about 205% of GDP in 2002 to less than 215% of GDP in 2015. As economies grow and develop, one of the standard changes is that a financial sector develops, too. But if one includes the US and China, the global debt/GDP ratio rises from about 200% in 2002 to 225% in 2015, which is a quite substantial bump (remember, we're talking relative to global GDP here!) in 13 years.

2)  Of course, global averages will conceal a number of individual countries which are above-average or below-average in substantial ways. Compared with historical experience, the private sector in the US and other high-income countries has not been deleveraging as quickly as usual since the end of the recession, but for advanced economies the rise in private debt (as a share of GDP) at least leveled off back around 2010 and has even declined a bit.

At present, the bigger worry should be about rising private sector debt in some large emerging market economies. China's debt buildup poses some real concerns: from 2008-2015, its private nonfinancial debt increased by about 70% of China's GDP; in Brazil, the increase over that time is about 30% of GDP; in Russia, 25% of GDP. As the report notes: "In a few systemically  important emerging market economies, private credit has expanded briskly in recent years. The speed  of the increase dangerously resembles that in advanced economies in the run-up to the global financial crisis."

3) The sector that is accumulating debt is shifting. Before the Great Recession, it was primarily households; since then, it's been primarily government. However, this is a shift that has some economic justification. When a society has built up a lot of private sector debt, and then the economy slows dramatically, one of the ways to help a share of that debt get paid off is to get the economy growing again--and public debt can be a way to do that, at least for a time. 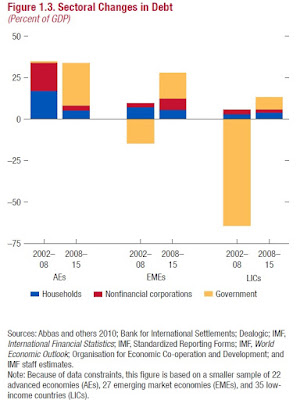 4) There's no simple way out of a situation where private debt has gotten excessive, as the world economy learned during the Great Recession and its aftermath. Getting the economy growing again is a huge help, because it means fewer borrowers will end up in default. When cutting a deal to address problems of debt overhand and bad loans, there can sometimes be a role for government loan guarantees when private-sector actors agree to take losses, but the government puts some limit on how large those losses will be.  Restructuring banks and financial institutions so that they are required to address problems of bad loans in the past and hold more capital against the risks of future bad loans is a help. Once a debt overhang situation has occurred, then helping get the bulk of the debt problem into the rear-view mirror  is a legitimate goal of public policy.