A certain amount of economic inequality is just luck. At the extreme, some people win the lottery, and others don't. But there is also the potential for more subtle kinds of luck, like two equally talented entrepreneurs, where one business happens to take off while the other doesn't. Or two equally talented workers who go to work for similar-looking companies, but one company takes off while the other craters. Richard Freeman discusses the research literature on why this final example might be significant enough to play a role in overall economic inequality in the US in his essay, "A Tale of Two Clones: A New Perspective on Inequality," just published by the Third Way think tank. Freeman sets the stage like this (footnotes omitted):


"[C]onsider two indistinguishable workers, you and your clone. By definition, you/clone have the same gender, ethnicity, years of schooling, family background, skills, etc. In 2006 you/clone graduated with identical academic records from the same university and obtained identical job offers from Facebook and MySpace. Not knowing any more about the future than the analysts who valued Facebook and MySpace roughly equally in the mid-2000s, you/clone flipped coins to decide which offer to accept: heads – Facebook; tails – MySpace. Clone’s coin came up heads. Yours came up tails. Ten years later, Clone is in the catbird’s seat in the job market — high pay, stock options, a secure future. You struggle. Back to university? Send job search letters to close friends? Ask distant acquaintances to help? The you/clone thought experiment may seem extreme, but recent research that I have conducted with colleagues finds that the earnings of workers with near-clone similarity in attributes diverged so much by the place they worked that rising inequality in pay among employers has become the major factor in the trend rise in inequality. ... The labor market has been dominated by economic forces that pull the wages of firms further apart from each other, motivating our analysis of the role of employers in increasing inequality."

In other words, a lot of inequality is about where you work. The rise in equality is linked to differences across what firms are paying employees who appear to be similarly qualified. As Freeman acknowledges, this argument that this is a quantitatively important cause of rising inequality isn't ironclad at this point, but it's highly suggested in several ways of looking at the data: Freeman  writes:


"This implies that 86% ... of the trend increase in inequality [from 1977-2009] occurs among people with measurably the same skills, whereas just 14% of the trend increase comes from changes in earnings among workers with different skills. The big surprise in the exhibit is that the inequality of average earnings among establishments increased by the same 0.147 points [measuring variance of natural log of earnings, a standard measure of inequality of earnings] as did inequality among workers with the same characteristics. This suggests that all of the increase in inequality among similar workers comes from the increase in earnings at their workplaces." 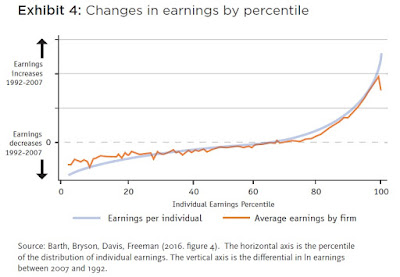 What makes it possible for successful firms to pay workers more? The answer must be rooted in higher productivity for those firms. Indeed, productivity seems to be diverging across firms, too. 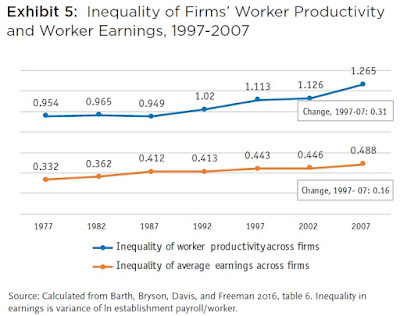 Indeed, as Freeman emphasizes, this figure shows that the equality of revenue per worker--a rough measure of productivity at the firm level--is diverging faster than inequality of wages across firms. Moreover, Freeman argues that a similar pattern of productivity divergence across firms is happening within each sector of the economy.

Freeman's evidence is consistent with some other studies. For example, last year I pointed to an OECD report on The Future of Productivity, which argued that while cutting-edge frontier firms continue to see strong increases in productivity, the reason for slower overall rates of productivity is that other firms aren't keeping up.

Thinking about inequality between similar workers may alter how one thinks about public policies related to underlying determinants of inequality. For example, it may be important to think about how productivity gains diffuse across industries and how that process may have changed. I suspect there is also some element of geographical separation here, where firms in certain areas are seeing faster productivity and wage increases, and so thinking about mobility of people and firms across geographic areas may be important, too.
Posted by Timothy Taylor at 9:22 AM