The Economics of Noncognitive Skills

When most people think about the goals of education, their minds turn to cognitive skills involved in reading, writing, 'rithmetic, and reasoning. We think about test scores on the well-known US-based tests of cognitive ability like the SAT, ACT, National Assessment of Educational Progress, or international tests like the TIMSS (Trends in International Mathematics and Science Study), PIRLS (Progress in International Reading Literacy Study), and PISA (Programme for International Student Assessment). But maybe we should instead be putting more focus on how students score on some lesser-known tests like the Rotter Locus of Control scale and the Rosenberg Self-Esteem scale. These and other tests that seek to measure noncognitive skills. which are "social, emotional, and behavioral skills" that "include qualities like perseverance, conscientiousness, and self-control, as well as social skills and leadership ability."

For a lot of jobs in the US economy, the problem isn't a lack of measurable cognitive skills: that is, it's not that employers are seeing a wave of job applicants who are truly illiterate or innumerate, or who are unable to complete a particular course or certification. Quite often, the problem as perceived by employers is that job applicants and young workers lack the necessary noncognitive skills. For
example, an article in the Wall Street Journal in late August noted:


"The job market’s most sought-after skills can be tough to spot on a résumé. Companies across the U.S. say it is becoming increasingly difficult to find applicants who can communicate clearly, take initiative, problem-solve and get along with co-workers. Those traits, often called soft skills, can make the difference between a standout employee and one who just gets by."

Diane Whitmore Schanzenbach, Ryan Nunn, Lauren Bauer, Megan Mumford, and Audrey Breitwieser offer an overview of some economics on these issues in "Seven Facts on Noncognitive Skills from Education to the Labor Market" (Hamilton Project at the Brookings Institution, October 2016).

The US Department of Labor looks at the variety of tasks that are required by different occupations. Over time, their analysis has shown a trend away from routine tasks (which of course are more prone to being replaced by software programs and robots), with a shift toward service tasks and social tasks. By comparison, the use of math/analytical tasks has risen only a bit. Of course, jobs are usually mixture of these skills, so this information should be understood as showing that the social and service part of a lot of jobs is rising, while the routine component of a lot of jobs is falling. 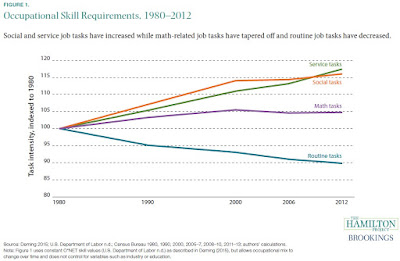 While it's true that on average, those with greater cognitive skills also tend to have greater noncognitive skills, the relationship is definitely not one-to-one. Schanzenbach and her co-authors note:

It seems clear that noncognitive skills can be taught. There are now hundreds of studies of such programs. The report offers this overview of types of programs and findings (citations omitted here for readability):


Although effects differed in magnitude across the types of intervention, impacts on students’ noncognitive skills were considerable: each noncognitive skill intervention resulted in improved academic achievement and positive social behaviors as well as reductions in conduct problems and emotional distress. These studies show that many different facets of noncognitive skills are malleable and teachable. Social and emotional learning programs were the most broadly studied; they also had somewhat smaller effects than did other interventions. Service-learning interventions integrated community service into a school’s academic program and were found to improve student achievement and social skills. Mindfulness interventions helped students’ present awareness, causing improvements in student achievement and reductions in emotional distress. Self-regulated learning programs cause growth in student achievement, and social skill development programs led to growth in social skills and reductions in conduct problems ...