Some Snapshots of Incarceration and Prisoner Reentry

The arguments over incarceration and crime are well-known: in the last few decades, US crime rates have generally fallen, while incarceration rates have risen. Diane Whitmore Schanzenbach, Ryan Nunn, Lauren Bauer, Audrey Breitwieser, Megan Mumford, and Greg Nantz offer some perspectives on the situation in their short discussion paper, "Twelve Facts about Incarceration and Prisoner Reentry," written for the Hamilton Project at the Brookings Institution (October 2016). Here are a couple of figures that jumped out at me. 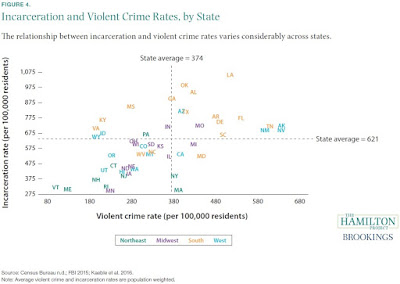 One can come up with various stories for why a state with a high, average, or low crime rate might have high, average, or low incarceration rates. But the variations are considerable, and when you end up telling a few dozen different stories to explain these kinds of patterns, it seems unlikely that all the stories are actually true.

Another figure makes the point that many of those in prison will be re-arrested after leaving prison; of all state prisoners released in 2006, 43$ were re-arrested within year. 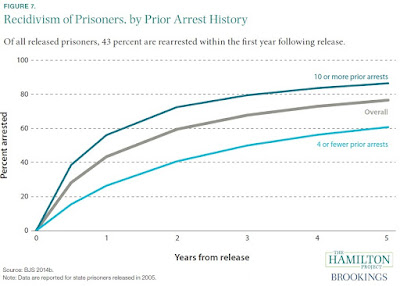 By itself, this fact can be used to argue that sentences should be longer (to incapacitate those likely to commit future crimes) or that rehabilitation efforts should be increased (to reduce the chance of committing future crimes). One might also try to focus on those who have been arrested relatively few times in the past. About 40% of this group is not rearrested in the five years after leaving prison. Is it possible to learn some lessons from those who manage to get clear of the criminal justice system?

The difficult social science question is, as so often occurs, figuring out to what extent one of these caused the other. This discussion paper is about providing background and spurring discussion, while not seeking to address the causation-vs.-correlation issues in a direct way.

My own sense of the research is that one can make a good case that the early years of the rise in incarceration in the 1980s and into the 1990s did help bring down crime rates, but that at some point in the late 1990s and into the 2000s, the high incarceration rates started running into diminishing returns. At present, the US could reduce its crime rates if it reallocated some spending away from incarceration and toward more police officers. For discussion, see "Crime and Incarceration: Correlation, Causation, and Policy" (April 29, 2016) or "Inequalities of Crime Victimization and Criminal Justice" (May 20, 2016).

Posted by Timothy Taylor at 8:57 AM