Snapshots of Global Poverty and Inequality

The World Bank is apparently inaugurating what will be an annual report on the theme of "Poverty and Shared Prosperity." The first report in the series, with the subtitle  "Taking on Inequality," was released in early October. "The report series will inform a global audience comprising development practitioners, policy makers, researchers, advocates, and citizens in general with the latest and most accurate estimates on trends in global poverty and shared prosperity." Here are some themes from the report that caught my ehe.

Global poverty, measured by the number of people living on $1.90 or less per day, has fallen dramatically in the last couple of decades. The blue line (right axis) shows the decline in the total number of the world's poor. The red line (left axis) shows the percentage of the world's population below the poverty line. The fall from 35% just 25 years ago in 1990 to about 10% at present is a dramatic improvement. 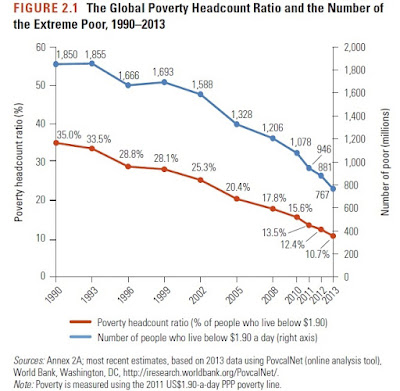 There are basically two ways that broad swaths of a population can be lifted out of poverty: broad economic growth and redistribution. It's worth remembering that the overwhelming majority of poverty reduction is due to economic growth--especially in China and India, but in other low-income countries around the world as well. About half of the world's poor live in countries of sub-Saharan Africa, while the nations of South Asia have another third of the world's poor, and not coincidentally, those are countries that have not experienced sustained economic growth.

However, as a result of economic growth, it has now become much more possible for even relatively low-income countries to undertake policies aimed at assisting the poor. A working paper by Chris Hoy and Andy Sumner at the Center for Global Development made this point in "Gasoline, Guns, and Giveaways:Is there New Capacity forRedistribution to End Three Quarters of Global Poverty?" (CDG Working Paper 433, August 2016). Hoy and Summer focus on countries with high levels of poverty, but that also subsidize fuel use and have higher military spending than their neighbors. They find that reallocating funds from fuel subsidies and military spending could address three-quarters of existing global poverty (in what follows, citations omitted):


We also consider the reallocation of two illustrative public “bads.” Specifically, regressive fossil-fuel subsidies which are an aspect of fiscal policy that is unequivocally pro-rich and what we have termed “surplus” military spending which we define as more guns than your neighbours meaning military spending above the regional lowest per capita spent. We appreciate that reducing military spending to this level may seem radical to some as no doubt would the reallocation of fossil fuel subsidies away from cheap petrol. However, our estimates of the impact of such changes in fiscal policy show what is at stake — the end of three quarters of global poverty — and our estimates are deliberately conservative for a number of reasons we outline. Our intention is not to annoy those who enjoy cheap petrol for example but to illustrate the resources now available nationally to governments and the implied opportunity costs in terms of poverty.

The report devoted a couple of chapters to policies for reducing poverty and inequality: "[S]pecific interventions discussed are ECD [early childhood development], including breastfeeding; universal health care coverage; good-quality education; cash transfers, mostly conditional transfers; investments in rural infrastructure, specifically, rural roads and electrification; and income and consumption taxes. The selection means that other policy interventions with potential effects on inequality are not included in the assessment. This is not intended to deny the potential equalizing effects of these other interventions; the evidence of the equalizing effects is merely less compelling, is currently being collected, or a general consensus is absent on how to frame the policies to reduce inequality while reaching other objectives."

It's interesting to me that the highlighted policy choices mostly are about unconditional cash transfers, and little of the focus is on high marginal tax rates for those with high incomes. Instead, the policies here both offer near-term support to the poor and also can work as longer-term investments in productivity and economic growth.

The chapters of the report focused on inequality point out a theme that I've mentioned before on this blog: inequality across the world as whole is falling, perhaps for the first time since the start of the industrial revolution in the early 19th century. But inequality within specific countries is rising. For example, economic growth in urban areas of China will tend to increase inequality within China, but reduce inequality from a global perspective. Thus, here's a picture of global inequality using the Gini coefficient. The break in the line occurs because there was a change how to compare the size of incomes across countries 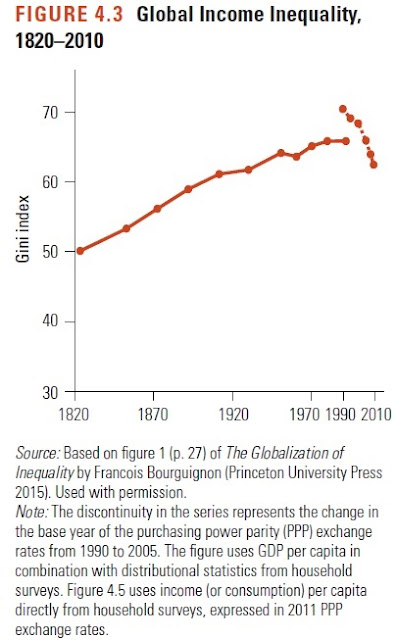 But even as global inequality is falling, inequality is rising not only in the US, but also in a number of developing economies like China, Indonesia, and to a lesser extent India. 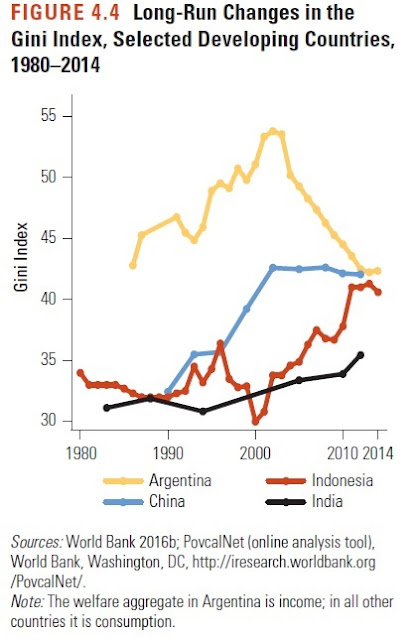 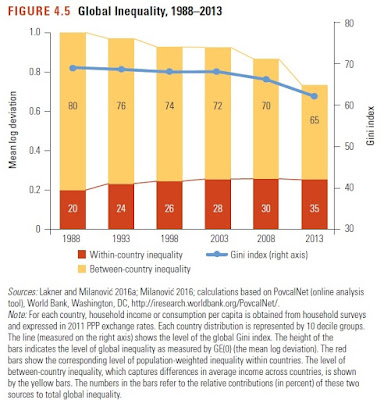 I think greater inequality in high-income countries like the US is a legitimate cause for concern. But I worry less about greater inequality in low-income countries. Tumultuous economic growth tends to affect some areas more than others. The challenge is for governments in countries that have experienced strong but region-specific or industry-specific growth to make the investments in health, education, and infrastructure that can help the poor who have not benefited from that growth.

Posted by Timothy Taylor at 9:10 AM