What Else Can Central Banks Do?

Central banks all over the world took dramatic actions during the Great Recession and its aftermath. For example, the US Federal Reserve took the "federal funds" interest rate down to near-zero in December 2008 and left it there until the small upward bump in December 2015, and also through its "quantitative easing" program has bought about $4 trillion in US Treasury debt and mortgage-backed securities. Other central banks have also dropped their policy target interest rates to near-zero and carried out quantitative easing. As a results, have central banks used up most of their ammunition, potentially leaving them with an inability to act if and when the next recession arrives? Laurence Ball, Joseph Gagnon, Patrick Honohan and Signe Krogstrup make the case that central banks continue to have considerabke power to engage in a loose monetary policy, should they wish to do so, in their monograph What Else Can Central Banks Do?, published as #18 in the Geneva Reports on the World Economy series.

The authors discuss an array of possibilities for central banks (forward guidance, helicopter money, higher inflation targets, and others), but the main focus is on two policies: additional quantitative easing and negative interest rates.  Here are a few of their comments that caught my eye:

On the topic of quantitative easing, Ball, Gagnon, Honohan and Krogstrup give this overall perspective:


"In the United States, for example, it is estimated that QE purchases of long-term bonds between 2008 and 2015 had macroeconomic effects equivalent to those of a sustained reduction of about 200 to 250 basis points in the policy rate. With a greater volume of purchases, the effects could have been almost proportionately greater. Another approach adopted by some central banks is subsidised and targeted lending to the banking system. QE could be expanded further by widening the range of assets that central banks purchase to include risky assets such as corporate debt and equities. For given quantities of asset purchases, this broader version of QE could well have stronger effects on asset prices and costs of funds, and hence on economic activity, than purchases of government bonds."

Here are a couple of piece of evidence from their discussion. They offer a summary of research evidence that QE does reduce interest rates on long-term bonds. They write: "Table 3.1, taken from Gagnon (2016), displays estimates of the effect of a purchase of long-term bonds equivalent to 10% of GDP on a country’s 10-year government bond yield." 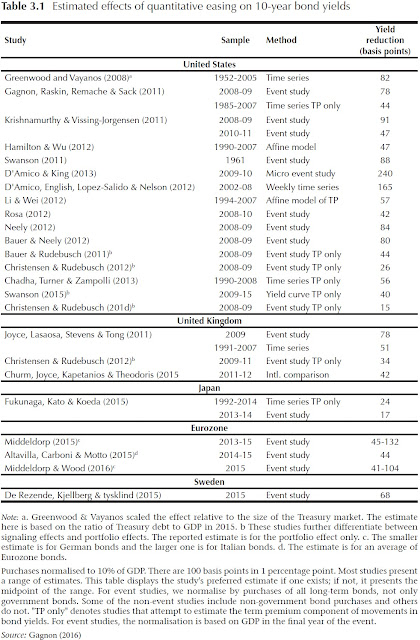 The other piece of evidence, just to give a sense of where their thoughts are tending, is a table that compares central bank assets to the total securities in an economy. In the US, for example, the assets at the Fed are about 25% of GDP, while all financial securities are 300% of GDP. The authors draw the inference that quantitative easing can be expanded quite substantially. They also point out that such policies might involve targeted lending of various kinds, not just purchases of existing securities. 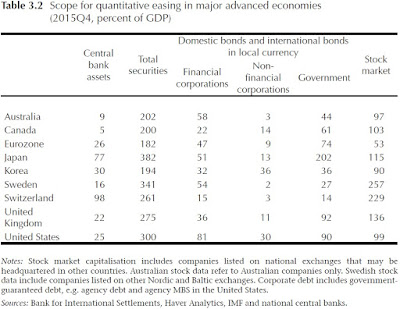 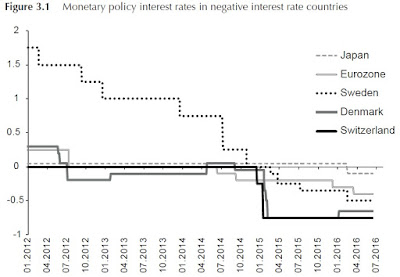 As the authors discuss, the graph oversimplifies how these policies are conducted. In a number of cases, the negative rates are "tiered," meaning that they apply to some types of deposits rather than others. In some countries, banks are now charging negative interest rates to some corporate and institutional investors.The evidence on whether these negative policy rates cause banks to reduce the interest rates at which they lend seems mixed: sometimes those interest rates drop, but at other times, it has looked as if banks are trying to make up for the money they are losing from negative interest rates on their deposits at the central bank by keeping their lending rates up. So far, the negative rates mostly haven't been passed along to retail bank depositors. As the authors explain:


"However, there is little evidence so far that banks are passing negative interest rates through to their retail depositors. Insured retail deposits are an attractive source of financing for a bank in normal times, and a retail customer can often be cross-sold many other value-added banking products. Banks are reluctant to lose market share for insured deposits, which they may not easily regain when interest rates turn positive. Moving to a negative interest rate could be a salient event that would cause retail customers to ‘shop around’. Given the inertia normally characterising retail bank relationships, the bank that makes the first move into negative deposit rates for retail customers could experience a hard-to-reverse loss of market share.

My own reading of the evidence is that the case for how quantitative easing reduced interest rates is fairly strong, but the evidence for the merits of negative interest rates is at this point less strong. For example, there are a variety of concerns that at a time when a main concern has been to require banks to hold more capital against losses, having the central bank charge negative interest rates may work in the opposite direction. For small open economies like Switzerland or Denmark, negative policy interest rates or negative rates on certain government debt can be a way of keeping their exchange rate low, which for their economies can be quite important. But what works for the Bank of Switzerland or Denmark's central bank doesn't necessarily extrapolate to the much larger Fed or the European Central Bank. After all, not all currencies can be reduced in value relative to each other at the same time. The authors also point out that the public is likely to be quite averse to explicitly negative nominal interest rates. They write:


"Perhaps the strongest de facto impediment to cutting rates further into negative territory is the lack of public acceptance and understanding of such measures. Partly due to pervasive money illusion, negative interest rates seem counterintuitive to the general public and are perceived in many countries as an unfair tax on savings. Taking measures to allow negative retail deposit rates could sharply increase public animosity. A lack of acceptance and understanding of a monetary policy measure can negatively affect confidence in the central bank’s ability to pursue its mandate, and might adversely affect transmission to demand. This constitutes an important communication challenge for central banks as they try to explain why the tool is needed, how it works, and how negative nominal rates will affect real life-time saving and real incomes of regular citizens, once growth and inflation developments are taken into account."

I'm happy not to be the central bank person working on the public relations campaign for why negative interest rates are a good idea! I worry that these authors are a little too too sanguine about how negative interest rates will not cause other economic problems, but they make their case strongly and clearly, in a way that's worth reading.

When thinking about the much more aggressive use of these kinds of monetary policy tools, I find myself of several minds. In particular, are we talking about what monetary policy should have been enacted back in 2009 and 2010? Or maybe what the European Central Bank should be doing now, given that it unemployment rates in the euro-zone have been above 10% for essentially the entire period since late 2009? Or are we talking about what the US Federal Reserve should be doing today with an unemployment rate that has now been at about 5% or less during the last calendar year?

In looking backward at 2008-2010, researchers can make a technical case that a more aggressive monetary response might have been helpful. But in thinking back to the extreme uncertainty of that time, it isn't obvious to me that if, say, the Federal Reserve had cut the federal funds interest rate to a negative 2 percent (as proposed in one of the authors' scenarios) or had announced that it was going to buy a few trillion dollars worth of US stocks that it would have calmed or quieted the financial markets. In the context of that time, such actions could well have been perceived as desperate gambles, and might even have made a dire situation worse.

But in looking forward, the question of alternative ways of conducting expansionary monetary policy issues raised by this essay are likely to be long-lasting. In the middle term, it seems likely that  real interest rates and rates of inflation are likely to remain low. But in the past, when a central bank has wanted to fight recession, it has often cut its target interest rate by 3-4 percentage points or even more. The problem is that if nominal interest rates are already low, it becomes impossible for central banks to cut interest rates by 3-4 percentage points in the next recession unless the rates become negative. Another alternative is more extensive quantitative easing. There are new and difficult policy questions with negative interest rates and quantitative easing, but these kinds of monetary policy tools in this report are what central banks are going to be discussing when (and it's "when", not "if") the next recession comes.
Posted by Timothy Taylor at 11:33 AM