Federal Debt on an Accrual Basis

The U.S. federal budget is typically measured on a cash basis: that is, how much tax money came in and how much spending went out. But for a more complete picture of any budget, it is useful to look at an accrual budget: that is, including not just current spending, but what spending has already been committed for the future. The federal government takes a stab at providing an overview of an accrual budget each year in a report from the U.S. Treasury called the Financial Report of the United States Government: the 2011 edition is here.

Here's a graphic showing all the assets and debts of the U.S. government from an accrual perspective. Federal debt held by the public, the usual measure of federal debt, is about $10.2 trillion. "As of September 30, 2011, the Government held about $2.7 trillion in assets, comprised mostly
of net property, plant, and equipment ($852.8 billion) and a combined total of $985.2 billion in
net loans receivable, mortgage-backed securities, and investments." The big addition here is the $5.8 trillion in already owed in employee and veterans' benefits. Taking these legal obligations into account increases the government's liabilities by more than half. 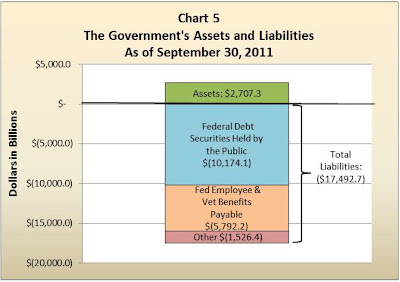 What about future obligations for Social Security and Medicare? Legally speaking, these are not legal obligations in the same sense as benefits owed to federal employees and to veterans. The U.S. government can and probably will adjust the revenue and spending side of Social Security and Medicare. That said, the report does offer some estimates of current federal obligations in this area. Here are some numbers for Social Security and the different parts of Medicare. The numbers are "present values" over 75 years (that is, how much money in the present, at an assumed rate of interest, would be equal to the sum over 75 years).

Thus, for example, the present value of all the revenues Social Security is scheduled to receive over the next 75 years is $41.6 trillion, the present value of total expenditures over that time is $50.8 trillion, and the current unfunded gap is $9.2 trillion. The multi-trillion dollar gaps for Part A (Hospital Insurance), Part B (Supplemental Medical), and Part D(Pharmaceuticals) of Medicare are also shown. The total gap is about $33 trillion--which for comparison is about twice as large as the $17.5 trillion in legally obligated liabilities in the chart above.

Two main lessons emerge from these figures. First, the debt obligations of the federal government are far larger than the $10 trillion or so in debt owed to the public. Adding what is legally owed in benefits to federal employees and veterans, together with promises already made to Social Security and Medicare, the total amount owed would reach about $50 trillion.

Second, of this $50 trillion in what is owed, about half is because of Medicare. America's health care the system is a huge part of what is driving our long-term fiscal problems. Indeed, the numbers in the table probably understate the effect of future rises in health care spending for several reasons. The table shows only Medicare, but Medicaid is also a substantial spending program without any dedicated payroll tax or funding source. Moreover, the estimates of Medicare costs in the table are likely to be far too low. At least, this was the conclusion of  Richard S. Foster, Chief Actuary, Centers for Medicare & Medicaid Services, who wrote in a "Statement of Actuarial Opinion" in an appendix to the 2011 Annual Report of the Medicare Trustees:

"[T]he financial projections shown in this report for Medicare do not represent a reasonable expectation for actual program operations in either the short range (as a result of the unsustainable reductions in physician payment rates) or the long range (because of the strong likelihood that the statutory reductions in price updates for most categories of Medicare provider services will not be viable). ... Although the current-law projections are poor indicators of the likely future financial status of Medicare, they serve the useful purpose of illustrating the exceptional improvement that would result if viable means can be found to permanently slow the growth in health care expenditures."

There is a raging argument over whether to attack the federal budget deficits now, or whether to wait until the economy recovers further and the unemployment rate falls. Compares with this picture of current federal debt from an accrued perspective -- a low-ball estimate of $50 trillion in accumulated obligations -- the short-term decisions are relatively small potatoes.
Posted by Timothy Taylor at 6:00 AM