What jobs do those in the top 1% of the income distribution hold? How have those jobs shifted in recent decades? Jon Bakija, Adam Cole, and Bradley T. Heim have evidence on this question in "Jobs and Income Growth of Top Earners and the Causes of Changing Income Inequality: Evidence from U.S. Tax Return Data." An April 2012  version of their working paper is here;  a very similar March 2012 version is here. They have a bunch of interesting tables and analysis: here, I'll give a sampling with two columns from two of their tables about the occupations of the top 1%, and some evidence on how what's driving the top 1% is really the top tenth of 1%. 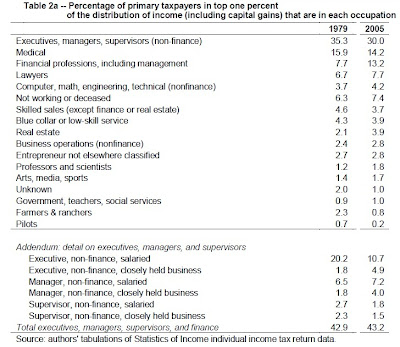 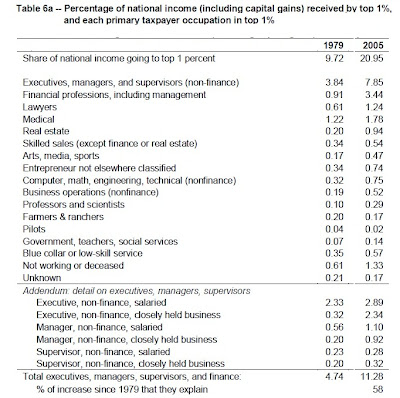 Finally, here's a striking figure that compares income growth from 1979 to 2005 for the top 0.1% to income growth for those in the bottom half of the top 1%: that is, those from the 99th percentile to those in the 99.5th percentile. The bottom line shows that on average, the growth rate of real income (in this case, excluding capital gains) was 2.4 times as fast for the top 0.1% as it was for those in the 99-99.5 percentiles. For certain occupations like "Executive, non-finance" and "Supervisor, non-finance," the multiple is much higher. The overall pattern here is that while slogans often refer to the top 1%, for most occupations, referring to the top 0.1% might be a more accurate description of where the largest income gains have been occurring. 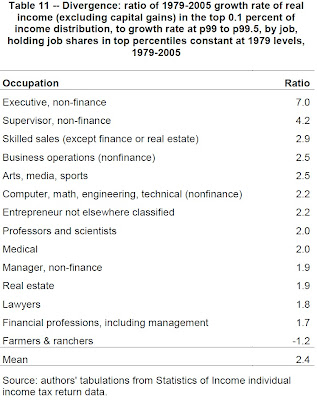